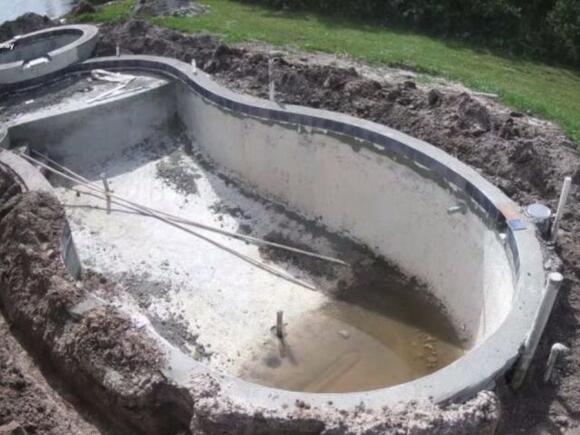 The Pasco and Polk County Sheriff’s Offices confirmed earlier this month that they too are looking into similar allegations.

The company’s owner James Staten told I-Team Investigator Jackie Callaway, “I know we have committed no crime. Just because someone makes a report or tells a story it does not mean that it is true.”

The I-team found hundreds of pools sitting unfinished across the Tampa Bay area and some of those customers say they’ve been waiting a year.

Staten says he's working to finish projects delayed by the pandemic. But some customers complain they still can't get answers about their jobs and others say they are facing liens filed against their homes by subcontractors who claim Olympus hasn’t paid them for their work.

Mark Maley is one of those customers. Documents show he paid in full for his $64,000 nearly complete pool. But this week a subcontractor filed a $3,500 dollar lien against Maley’s home because he said Olympus hasn’t paid.

“I've called the company every day two or three times a day and no one answers the phone,” Maley said.

Staten says he’s reached out to the subcontractor and has been “in contact the last couple of days at least a half dozen times to get that resolved.”

To add to its legal troubles Olympus now faces a $1.1 million lawsuit in Pasco County. SCP Distributors LLC, the largest pool supply company in the nation, says the company owes them money for supplies.

SCP’s attorney told Jackie they chose to take Olympus to court rather than file liens against individual homeowners.

Staten says they've made progress on dozens of projects in just the last two weeks and that they've received final inspections on more than 15 pools in the last 10 days, a pace he's determined to continue. “We are going to get all these pools done.” Said Staten

St. Pete Police aims to cut down on crashes with new campaign

The St. Petersburg Police Department is increasing its police presence this month. The department is aiming to cut down on crashes and slow down speeders.
2 HOURS AGO
ABC Action News WFTS

Volunteers are needed for Palm Harbor's Suncoast Primate Sanctuary, which is a good home for great apes and monkeys.
4 HOURS AGO
ABC Action News WFTS

A single-engine Piper PA-28 crashed in the Gulf of Mexico about 2.5 miles west of the Venice Fishing Pier, shortly after taking off from Venice Municipal Airport in Florida.
1 DAY AGO
ABC Action News WFTS

Olympus Pools’ customers try to get paid from state fund

Hundreds of homeowners left with craters and partially finished pools after the collapse of one of Florida's largest custom pool builders are now waiting to get paid from a state fund created.
1 DAY AGO
ABC Action News WFTS

Protesters held up a Nazi flag outside a fundraising event that featured drag queens in Lakeland over the weekend.
10 HOURS AGO
ABC Action News WFTS

A group in Clearwater, Florida, is devoting their time to unearthing the story of a buried past in the city.
9 HOURS AGO
ABC Action News WFTS

When officers arrived, they located the body of a middle-aged black adult male with upper-body trauma.
1 DAY AGO
ABC Action News WFTS

Mayor Jane Castor stated Tampa Police Chief Mary O'Connor has been put on administrative leave after she was stopped by a Pinellas County Sheriff's deputy on Nov. 12.
4 DAYS AGO
ABC Action News WFTS

Man dies after crashing into cow in Manatee County: FHP

The Tampa Bay Rays will no longer hold their 2023 spring training at Charlotte Sports Park due to damage caused by Hurricane Ian, according to a join statement released on Thursday night.
3 DAYS AGO
ABC Action News WFTS

Vintage vehicles owned by Leroy Gonzalez, a Tampa real estate developer, are being auctioned. Dozens of classic car enthusiasts got a preview of vehicles on the auction block in Seffner.
3 DAYS AGO
ABC Action News WFTS

Judge sentences doctor, former Insys sales rep to 3 and a half years in prison

A judge sentenced a local doctor and former pharmaceutical sales representative to three and a half years in federal prison on Monday after a jury found him guilty in May 2022.
19 HOURS AGO
ABC Action News WFTS

Pinellas officials determined that a house fire in Clearwater on Thursday was intentionally set, according to a press release.
3 DAYS AGO
ABC Action News WFTS

There’s a new drug treatment facility in the Tampa Bay area, and I spoke with the team running the facility about what they hope to accomplish.
3 DAYS AGO
ABC Action News WFTS

Experts: High-profile cases of domestic violence shine a spotlight on the issue

An arrest warrant for domestic violence was issued by Tampa Police for former buccaneers player Antonio Brown after police say an incident got physical and he threw a shoe at the victim.
4 DAYS AGO
ABC Action News WFTS

Mae Krier, who worked for Boeing in 1943 making Rivets for B-17 Bombers, was speaking with female fans from across the Tampa Bay area in Riverview.
4 DAYS AGO