By John Foley
Posted by
Reuters
23 days ago 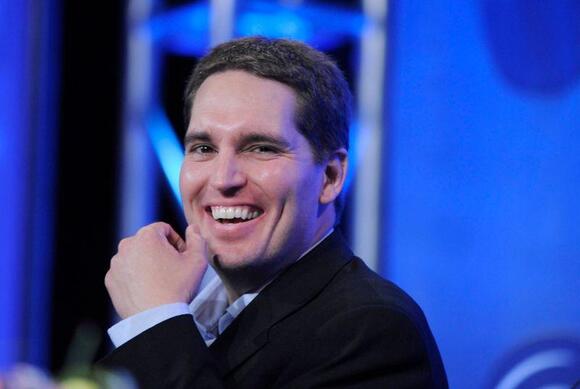 NEW YORK (Reuters Breakingviews) - AT&T may rue its generosity. The package it awarded Jason Kilar last May to run its media division was too handsome and one reason why shareholders voted to reject the U.S. telecom’s compensation plan at its annual meeting last month. Now that the company is merging Kilar’s empire with rival Discovery, the two firms will need to decide what to do with their leading man. All options could prove costly, in different ways. Kilar got $48 million in shares in return for restructuring WarnerMedia and shepherding the launch of HBO Max, the streaming service that competes with Netflix. That was egregiously generous even for an executive with impressive credentials, including stints at Hulu and Amazon.com. His awards for 2020 as WarnerMedia chief executive were more than twice that of his boss John Stankey, who started two months later. Unlike Stankey, Kilar gets his payout over four years, regardless of performance. The on-demand TV hotshot might roll his sweet deal over into the new company. But Discovery already has a CEO: David Zaslav, whose pay puts Kilar’s in the shade and who just signed on to stay in his role until 2027. Discovery paid Zaslav $213 million over the last three years. Kilar has more streaming experience and could demand even more than his current package, forcing the new company to double down on AT&T’s largesse. Alternatively, he could quit. That might mean giving up $36 million of unvested awards. But it would leave AT&T scrambling to find a new leader while the merger is being engineered, which could take more than a year. That’s a long time in the cut-throat world of video streaming, where rivals are engaged in a fierce land-grab. If AT&T thought Kilar merited such a high sum to start with, it follows that without him, WarnerMedia’s value could deteriorate. Whatever happens to Kilar, Discovery faces a potential pay showdown. In 2019, its compensation practices got a thumbs down from 39% of votes cast at the annual meeting, even though 46% of the company’s total votes are held by insiders with supervoting shares. After the WarnerMedia merger is done, that protective phalanx will fade away, leaving the company more exposed to shareholder discontent and would-be activists. That sets this merger up for a tense second season.

- AT&T said on May 17 that it planned to merge its TV and film business WarnerMedia with listed rival Discovery, in return for 71% of the new company and a package of cash and debt securities worth $43 billion. The merger is expected to close in mid-2022.

- David Zaslav, chief executive of Discovery, will lead the new company and has extended his contract until 2027.

- Executives said on a call with reporters that details, such as the future role of WarnerMedia Chief Executive Jason Kilar, had yet to be worked out.

- Kilar joined AT&T in May 2020 and was granted $48 million of shares as a retention bonus, payable over four years in equal-sized tranches. At the company’s annual meeting on April 30, some 51% of shareholders rejected the company’s pay plan in a non-binding vote.

- For previous columns by the author, Reuters customers can click on [FOLEY/]

Over its nearly five-decade history, HBO has never run commercials. Now WarnerMedia, in a bid to maximize its streaming base, has rolled out a cheaper version of HBO Max with ads — $9.99 monthly, 33% less than the regular $14.99 no-ads plan. The company promises that it will feel as deluxe as any advertising can be, representing the lowest-clutter service pushing onto the streaming battlefield. Here are five key takeaways from its latest streaming play.

Disney Feuds With Comcast Over Direction Of Hulu

Walt Disney Co (NYSE: DIS) and Comcast Corporation (NASDAQ: CMCSA) are in an escalating feud over the direction of Hulu, the streaming service jointly owned by the rival companies, with Comcast reportedly putting a freeze on its funding of Hulu while agitating for a large payoff when Disney is slated to buy Comcast’s minority stake in 2024.

News broke in May that AT&T would spin off WarnerMedia to Discovery and that David Zaslav would run the combined media empire, but that deal isn’t closing any time soon. The merger is subject to federal review, which could take a year or more. That leaves WarnerMedia awkwardly situated and without clear leadership in the midst of the streaming wars.

HBO Max now offers an ad-supported streaming plan for $10 a month, but commercial-free is still the better choice

If you buy through our links, we may earn money from affiliate partners. HBO Max now offers an ad-supported plan for $10 a month, which is $5 less than the ad-free plan. Annual HBO Max subscriptions are available for $100 (with ads) or $150 (no-ads). Though it's nice to have...

Comcast Has Reportedly Stopped Funding Hulu Amidst Feud With Disney

As its competitors have acquired each other and introduced new pricing models, Hulu has remained relatively quiet over the past few months. It turns out, however, that behind the scenes, there’s reportedly been a lot more action going on, specifically between co-owners Comcast and Disney. In fact, Comcast has allegedly stopped contributing money to the company and is now, per reports, locked in a legal battle with the Mouse House to figure out how much the service is worth, as it may exit the partnership in 2024.

After Spinning Off Warner Bros., Is AT&T Ready to Compete With Verizon?

AT&T (NYSE:T) getting into the media business didn't make much sense when it was doing the deals. Today, $170 billion in debt later, it's understandable why the company is now abandoning the space. The carrier's $43 billion deal to merge its WarnerMedia division with Discovery Communications (NASDAQ:DISCA)(NASDAQ:DISCK) is smart, even...

As if able companies like Comcast (NASDAQ:CMCSA) and Charter (NASDAQ:CHTR) didn't already have enough to worry about, with the cord-cutting movement that's chipping away at their business, now there's another threat that appears to be here to stay. Some of the very studios and production outfits supplying cable with video...

Most of Wall Street underestimates the impact of cord cutting and overestimates the extent companies can compensate with internet streaming channels. As a result, most of the Street was shocked by AT&T’s (NYSE:T) decision to unload WarnerMedia for a relatively low amount of money, triggering a sizeable downturn in T stock. I believe that Disney (NYSE:DIS) stock will, at some point, take a similar, but much worse, tumble.

Last month, AT&T announced it was spinning off WarnerMedia in a $43 billion merger with Discovery. While those involved don't expect the deal to close until partway through next year, the proposed entity already has a name. Should Discovery shareholders and federal regulators approve the merger, the resulting union between WarnerMedia and Discovery will be known as Warner Bros. Discovery. Original, we know.

Op-ed: Quality TV news could be a casualty of the streaming wars

Tom Rogers, the first president of NBC Cable, lays out the quandary for the TV news business in light of cord-cutting and increased competition. One solution could be a bundle of TV news. Comcast-NBCUniversal (the parent company of CNBC) is well-suited for this, given its broad array of news assets, he argues.

Nordic Entertainment Group (NENT Group) has sold NENT Studios’ UK content distribution business (formerly known as DRG) to All3Media. The sale is in line with NENT Group’s previously stated ambition to focus NENT Studios on scripted content for its Viaplay streaming service, which will be available in at least 15 countries by 2023.

Everything Coming To Netflix, Disney Plus, HBO Max, Hulu And Prime This Weekend

Ladies and gentlemen, it’s the weekend. And if you’re looking to kick back and catch some new material on streaming over the next few days, you’re in luck, as Netflix and all the major platforms have a lot of great stuff going up to keep you entertained until Monday. In particular, a number of established hit TV shows are returning for fresh seasons this Friday, with a bunch of original movies also debuting. So, let’s take a look at some of the highlights.

For HBO Max executives, news and sports on broadcast should be rethought

HBO Max only arrives in Brazil at the end of June, but, at least in the US, the service has been banging its head around trying to find the best format to deliver some of its content. According to one WarnerMedia CEO, there are still questions about how to deliver news and sports material on the streaming platform, as the logic with cable TV is very different.

The last of the numbers are finally in hand. All in all, last quarter was another miserable one for the country's biggest cable television names. Led by the likes of Comcast (NASDAQ:CMCSA) and AT&T's (NYSE:T) DirecTV, more than 1.5 million U.S. consumers cut the cord in the first quarter. Throw in the number of streaming cable users that also discontinued their service during the first quarter, and Leichtman Research Group pegs the figure closer to 2 million. eMarketer suggests the number of cable-subscribing households in the United States is less than three-fourths of what it was at 2013's peak, and still shrinking.

Iris Knobloch, the long-serving president of WarnerMedia in France, Benelux, Germany, Austria and Switzerland, is leaving the company after 25 years. In her most recent role, Knobloch was responsible for WarnerMedia’s strategy and for optimising all commercial and group marketing activities across the region. Her remit included theatrical distribution, local theatrical productions, content licensing, home entertainment and consumer products, as well as ad sales and affiliate distribution for WarnerMedia channels.