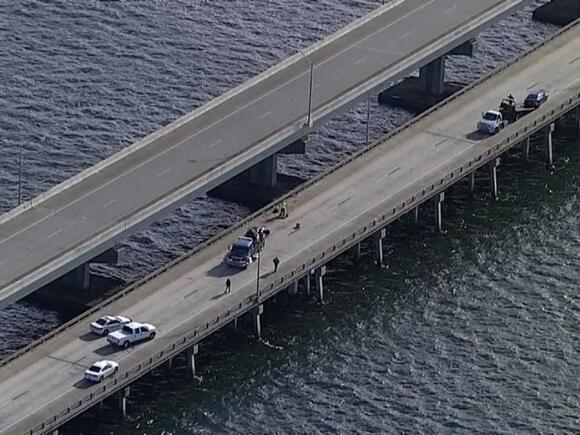 Tampa Police say an impaired driver crashed into a vehicle on the shoulder of the Gandy Bridge early Thursday morning resulting in the death of a 15-year-old girl.

According to police, the crash happened around 4:15 a.m. on the eastbound lanes of the Gandy, which was closed for several hours .

Police say 28-year-old Sebastian Gutierrez crashed into an Infiniti that was on the shoulder of the road. Police say the Infiniti had run out of gas and the driver, a 20-year-old male, pulled off to the left shoulder and got out.

The driver told police when he got out he could see what appeared to be a drunk driver swerving from side to side heading in their direction. Police say the 20-year-old driver tried to warn his passengers, another 20-year-old man, a 17-year-old girl and the 15-year-old girl but was unable to before the crash.

Police say Gutierrez stayed at the scene and had no apparent injuries. Gutierrez showed signs of impairment, according to police, and was charged with DUI manslaughter.

A Tampa Police officer was involved in a crash. The accident happened at Martin Luther King Blvd and North 29th Street in Tampa at around 1:30 p.m.
TAMPA, FL・18 HOURS AGO
ABC Action News WFTS

A Polk Deputy is in the hospital after a two-vehicle crash in Auburndale.
AUBURNDALE, FL・1 DAY AGO
ABC Action News WFTS

A Lakeland man is dead after a single-vehicle crash in which he was not wearing a seatbelt, according to deputies.
1 DAY AGO
ABC Action News WFTS

A man was arrested for killing a man in a St. Pete alleyway early Sunday morning, police said.
PUBLIC SAFETY・5 HOURS AGO

After nearly a month long search for Brian Laundrie, the FBI announced it located human remains inside the Myakkahatchee Creek Environmental Park in North Port.
NORTH PORT, FL・1 DAY AGO

Motorcyclist killed after crash with FHP cruiser, semi on I-4

A motorcyclist from Lakeland was killed in a crash on I-4 Monday night that involved an FHP Trooper and a semi, according to the Florida Highway Patrol.
LAKELAND, FL・5 DAYS AGO
ABC Action News WFTS

A person is dead following a train vs pedestrian crash in Dover Monday night.
HILLSBOROUGH COUNTY, FL・5 DAYS AGO

An attorney says family members are hoping for more answers from law enforcement regarding the cause of death for Brian Laudrie, who was a person of interest in the death of girlfriend Gabby Petito.
PUBLIC SAFETY・2 DAYS AGO
ABC Action News WFTS

A man was shot and killed by officers after they said he pointed a military-style rifle at them in Tarpon Springs Saturday night.
TARPON SPRINGS, FL・7 DAYS AGO
ABC Action News WFTS

The Polk County Sheriff's Office is searching for a man accused of killing his 74-year-old aunt in Polk City.
POLK COUNTY, FL・9 DAYS AGO