Travel addict writing about the wonders of the world. Visited 30+ countries, lived in 4.

6 Weird Things to Do in Portland

Posted by
Diana Bernardo
29 days ago 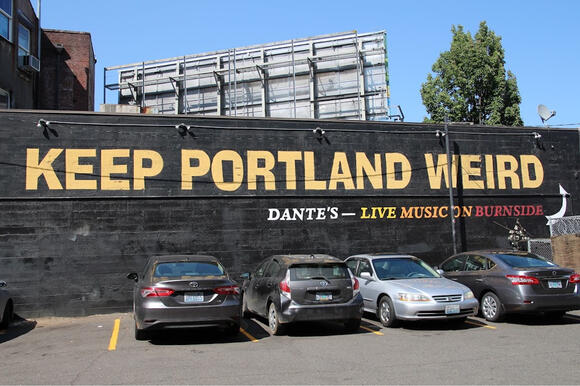 That’s exactly what the creators of these experiences accomplished. In a city that is well known for its quirkiness, we set out to discover some of the weirdest activities you can do. Here is what we found.

Why would a doughnut shop be on a list of weird places to visit?

Because here you can do much more than eating pastries! For example… getting married. Legally. You can invite up to 50 people to celebrate your love amongst fried deliciousness, with a variety of fillings and topics. Certainly, a much cheaper option for a wedding cake than the traditional one.

However, if if you are not craving for a wedding, you can still step in and try the doughnuts, no strings attached. Alternatively, order online from the shop’s website.

From the mid 19th to mid 20th century, Portland’s ports were considered to be some of the most dangerous in the world, and certainly were some of the busiest.

Under the city, there is an intricate system of tunnels that were used to keep ships’ supplies safe. But while the goods were safe, many people were not. Or so goes the legend…

It is said that these tunnels were also used to trap abled men, who were then sold to the ships to be slaves at sea. Women were also captured and taken to prostitution schemes. The capturing of these people was commonly known as “Shanghaiing”.

Whether it is true or not, the tunnels still make for a weird, interesting visit in Portland. You can access them in a guided tour as, for example, this one.

In the words of its creator, Conrad Elwood, the Peculiarium is “a store dedicated to learning and terror”.

Photos are allowed and even encouraged and there are great places to take selfies that will certainly cause an impact on social media.

Admission costs $5 but it is free if you go in a costume or take your pet with you. A good place to walk your dog one of these days, huh?

You can learn more about it on the Peculiarium website.

Is it a boat? Is it a UFO? It’s both, plus an art installation, as it is completely covered in graffiti.

This abandoned shipwreck has the shape of a UFO and is tucked amongst the trees nearby Collins Beach, in Oregon’s Sauvie Island, north of Portland.

After years of abandonment and no maintenance at all, the UFO boat is not a safe place to enter. But you can still admire its weirdness from the outside.

Sauvie Island is a great place for a day trip, and you can enjoy some outdoorsy activities, like hiking, bird-watching or simply lying down on the beach.

Interestingly, this castle has no connection to any witches. But its history is still pretty terrifying… The land where it was built was acquired in the mid-1800s by a man called Danford Balch, who is said to have shot on the face the man who eloped with his daughter. Balch was arrested but managed to escape, only to be caught again and executed, in the first legal execution in Oregon.

Later on, in the 1930s, a structure was built to be used as a toilet for hikers. However, it was badly damaged during a storm in 1962 and left to slowly degrade.

In the 1980s, high school students found the ruins of the old bathrooms and started using them as a spot for gatherings and parties, having baptized it “The Witch's Castle”.

This tree grows on the corner of Northeast Morris Street and 7th Avenue but, instead of being covered in leaves, it is covered in wishes.

The wishing tree was born when Nicole Helprin wrote some wishes and hung them on a tree growing in her garden. Then, she left for a trip. When she returned, the tree was covered in wishes that other people had left. Which stick on the tree a note that read “This is a wishing tree. Please find a blank tag. Write your wish *for you, a loved one, the neighborhood, etc.)”.

While this tree is not exactly a weird thing, some of the wishes you will read there are. As, for example, this one: “I am wishing for golden threads and a year full of crepes”.

Travel addict writing about the wonders of the world. Visited 30+ countries, lived in 4.

4 Things To Do Alone in Orlando

Orlando, also known as the City Beautiful, attracts visitors with sunny weather and well-known theme parks. However, this place has so much more to offer to travelers. From an incredible art scene to some of the best restaurants in Florida, Orlando is the perfect place to recharge your batteries and learn about the culture.

7 Fun Places Where You Can Eat in Las Vegas

Las Vegas offers a unique and exotic experience every single day. From fashion to entertainment, the fast-paced city has something for everyone. So, when it comes to food, you wouldn’t feel surprised to find some of the weirdest places in Las Vegas. There are more than 5000 eateries in the city parameters. And each one of them is unique in its way.

Oregon, also known as the Beaver State, is heaven for outdoor enthusiasts. This state is filled with natural wonders, ranging from tall mountains to dormant volcanoes, dunes, and river gorges. Of course, you will get a chance to enjoy spectacular scenery anywhere you go. Just remember to pack your sense of adventure because Oregon is for exploring!

From snow-capped peaks to crystal clear lakes and volcanoes, the nature of Washington is simply sensational. The Evergreen State can offer so much to outdoor enthusiasts regardless if they love hiking, camping, or simply relaxing in the fresh mountain air.

7 Fun Activities in Houston for Adults

Also known as Space City, Houston is one of the most popular tourist destinations in the United States. Approximately 22.3 million people visit the city every year. Multiple exciting things happen within the space city’s parameters every single day. No two days spent in Houston can be the same!

7 Interesting Activities to Do Alone in Seattle

Seattle, the largest city in Washington state, is the perfect blend of nature and concrete. It is a place for all types of travelers. So it doesn’t matter if you love spending time outdoors or prefer urban areas – you will have something fun to do in Seattle.

Los Angeles has a long tradition of being one of the most LGBT-friendly cities in the United States. In 2014, it even topped that list. It is also a city where both men and women of the community can find places targeted at them — more often than not, the offer for the gay community is much bigger than for the lesbian one.

Are you planning a trip to Seattle and want to know what you absolutely can’t miss? If so, you landed in the right place, as we will provide you with a complete guide of 5 things you must visit in the Emerald City.

7 Great Activities To Do in Seattle

Coffee, greenery, and entertainment are some of the things that better define Seattle. Also called Emerald City, Seattle has a blanket of lush greenery with thousands of coffee shops and tourist sites. Each step into the city only leaves you more enthralled than before.

5 Peculiar Foods You Must Try in Arizona

Are you a foodie planning a trip to Arizona? If yes, look no further, you have found the perfect guide! In this article, we will show you some of the most bizarre dishes you can find in the Copper State, from Phoenix to Jerome, from Sedona to Tucson.

Located in the Pacific Northwest, Seattle is a perfect city for outdoor enthusiasts. There is the ocean on one side and breathtaking mountains on the other. Music fans also flock to this place because Seattle is the official birthplace of grunge, a genre that took the world by storm in the first part of the 1990s.

5 Things To Do In Los Angeles At Least Once

Los Angeles is one of the largest cities in the United States of America. Whether you live there or are just visiting, you will find plenty of activities to do. It doesn’t matter what kind of person you are, or your personal taste, this city has something for you!

8 Delicious Vegetarian and Vegan Restaurants to Try in Portland