Our experts name their 2021 NBA regular-season award winners, and the MVP is unanimous 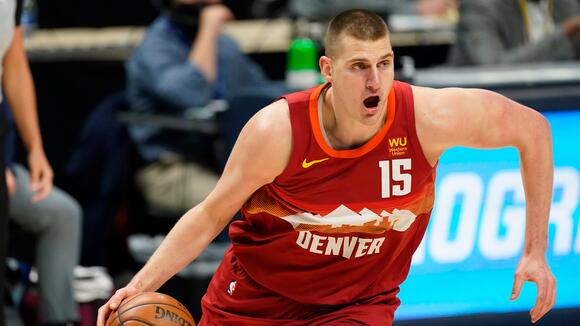 LeBron James said Golden State's Steph Curry is the MVP of the 2020-21 season.

Perhaps James was just using a little gamesmanship ahead of the Lakers' play-in game against the Warriors. Regardless, Curry is a legit MVP candidate this season.

But will Curry win the award? Or will Denver's Nikola Jokic, taken No. 41 in the second round of the 2014 draft, become the lowest draft pick ever to win MVP?

What about rookie of the year? Charlotte's LaMelo Ball or Minnesota's Anthony Edwards? Utah's Rudy Gobert or Philadelphia's Ben Simmons for defensive player of the year? It seems New York's Julius Randle is the easy choice for Most Improved Player. Coach of the Year isn't so easy. And Sixth Man of the Year presents a couple of different options.

Medina: Nikola Jokic has consistently helped the Nuggets as a passing and scoring threat without missing a game (he would be the first MVP to play in every game since Kobe Bryant in 2007-08), and while guiding them to a 9-3 record following Jamal Murray’s season-ending injury.

Eppers: Nikola Jokic has been the most consistently dominant player all season, putting up historic numbers from the center position while not missing a game.

Rookie of the year

Zillgitt: Charlotte point guard LaMelo Ball 's absence due to a wrist injury later in the season gave voters an opportunity to consider Anthony Edwards. But Ball’s impact on winning and change in how Charlotte plays and is perceived gave him the slight edge.

Medina: LaMelo Ball joined Kawhi Leonard, Jimmy Butler and Dejounte Murray as the only NBA players this season to average at least 15 points, five rebounds, five assists and 1.5 steals while playing in at least 70% of their team’s games.

Eppers: LaMelo Ball has been one of the league’s better passers and playmakers from the start, and his scoring and defense have been good enough to overcome Anthony Edwards’ advantage in games played.

Zillgitt: New York Knicks forward Julius Randle 's year over year increase from 19.5 points per game to 24.1 is impressive but the improvement in 3-point shooting from 27.7% to 41.1% while taking nearly two more 3s per game this season made Randle the clear choice.

Medina: Julius Randle made his first All-Star appearance before becoming one of five players this season to average at least 20 points, 10 rebounds and 5.5 assists along with Jokic, Giannis Antetokounmpo, Russell Westbrook and Domantas Sabonis. Randle has become a more polished playmaker, shooter and defender by improving his decision making while still relying on his physical presence.

Eppers: Julius Randle ’s emergence as a potential All-NBA pick is downright remarkable. His development as a playmaker and 3-point shooter is a huge reason the Knicks are the fourth seed in the East.

Medina: Despite his high-volume shooting, Jordan Clarkson is actually the most efficient bench scorer. He leads in the NBA in secondary scoring (18.4 points per game) while playing just 26.7 minutes per game. He also leads among NBA reserves in most 3-pointers (208) and 20-point plus games (24).

Eppers: Jordan Clarkson is Utah’s second-leading scorer, averaging a career-high 18.4 points per game as the epitome of a bucket-getting spark off the bench.

Zillgitt: Measuring defensive impact takes many forms. But the Utah Jazz were about 12 points per 100 possessions better defensively with Rudy Gobert on the court compared to when he wasn’t in the game.

Medina: Rudy Gobert leads the NBA in several defensive statistical categories, including defensive rating (100.6), defensive rebounds (10.1) and blocks (2.7). But Gobert is also the league’s best defensive player because of his impact on team defense.

Eppers: 76ers' guard Ben Simmons is the most versatile defensive player in the league, who made life miserable for everyone from score-first point guards to the best mid-range shooters.

Zillgitt: Tom Thibodeau was expected to make the New York Knicks a better team but no one foresaw this turnaround – from .318 winning percentage last season to .569 this season while extracting the most from several players who were on the team last season.

Medina: It should not be surprising that Tom Thibodeau has changed the team’s culture with his work-oriented approach and focus on player development. But the immediate results speaks well to how effective Thibodeau has balanced between having his players work hard and work smart.

Eppers: It’s easy to attribute Phoenix’s success to the acquisition of Chris Paul, but that’s a disservice to Monty Williams , who made all the right moves in guiding the Suns from bubble darling to legitimate title contender.

This article originally appeared on USA TODAY: Our experts name their 2021 NBA regular-season award winners, and the MVP is unanimous

Shocking and frankly terrifying news broke regarding Memphis Grizzlies superstar Ja Morant on Sunday afternoon. The story doesn’t quite paint the 2022 Most Improved Player or his associates in the most positive of lights either. The Athletic delivered a bombshell report that detailed the shocking incident. It occurred last month after a game between Morant’s Grizzlies Read more... The post NBA world reacts to absolutely shocking Ja Morant news appeared first on The Comeback: Today’s Top Sports Stories & Reactions.
MEMPHIS, TN・2 DAYS AGO
BasketballNetwork.net

Stephen A. lets us in on a private conversation between him and Isiah Thomas about Steph Curry.
15 HOURS AGO
USA TODAY

A discussion seemingly about Kyrie Irving's trade to Dallas sunk into an exchange of personal attacks between Stephen A. Smith and Jay Williams.
DALLAS, TX・1 DAY AGO
OnlyHomers

There have been a number of sad reports coming out of the world of professional wrestling in recent weeks, with former stars passing away, both during their career and following it.
2 DAYS AGO
USA TODAY

Selection Sunday is five weeks away so it's time to make our first bracket projection for the NCAA men's tournament. Purdue starts as the No. 1 seed.
ALABAMA STATE・16 HOURS AGO
USA TODAY

Even after loss, Purdue remains No. 1 ahead of Houston in USA TODAY Sports men's basketball poll

After a week where three of the top four teams lost, Purdue maintained its place at No. 1 in the men's basketball poll despite falling at Indiana.
WEST LAFAYETTE, IN・1 DAY AGO