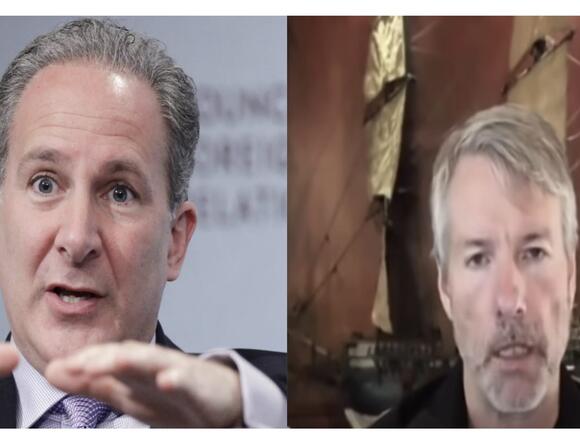 "Gold bug" Peter Schiff and MicroStrategy CEO Michael Saylor on Monday engaged in a heated online argument over their views on cryptocurrencies.

He has previously trashed bitcoin as useless.

"CEO's who followed @michael_saylor's asinine advice to plug their balance sheets into #Bitcoin to hedge against an expected annual #inflation rate of 2% are now down as much as 34% on their 'hedge' in one month," Schiff said in a tweet . "That's 17 years of expected inflation losses. Time to pull the plug!"

Bitcoin was last trading around $45,000 on Tuesday, and is up 45% so far this year. It fell almost 13% after billionaire Elon Musk shocked the crypto market by suspending bitcoin payments for Tesla, citing concerns over the energy consumption of the mining process.

Saylor struck back at Schiff with a screenshot of gold's investment gains compared to bitcoin, showing that the precious metal would have provided returns 77% below those of bitcoin over the past 12 months.

Schiff believes gold is a far more reliable asset than cryptocurrencies. He asked Saylor, whose MicroStrategy company owns billions in bitcoin, why they couldn't debate the matter, instead of turning down opportunities to do so.

"It's not clear what we would debate," Saylor tweeted . "Your position appears to be 'Buy some gold, or silver, or gold stocks, or government bonds, or corporate bonds, or dividend stocks, or value stocks, or emerging market stocks, or small company stocks, or anything really - just not too much.'"

Schiff is best known for accurately predicting the 2008 financial crisis, and his forecasts for the economy are closely watched. After Elon Musk's tweets on bitcoin seemed to have an effect on its price, he called investing in the asset a gamble . But his son, Peter Schiff, moved 100% of his portfolio into the digital asset earlier this year.

Schiff criticized Saylor's promotion of the cryptocurrency, and said : "I think everything you say to promote bitcoin is nonsense. That's the debate."

Saylor hit back , saying there was no point in debating a critic who "offers nothing but fear, uncertainty, doubt, & vitriol."

"The world needs strong money, and since by your own admission you have no faith in #gold, equity, bonds, & fiat, #Bitcoin wins by default," he added.

Read More: UBS says to buy these 42 'new momentum' stocks that are poised to outperform in a rising inflation environment

After the sell-off over the last week, the most recent price action for bitcoin shows signs of stabilization around the $45,000 price level, according to Simon Peters, cryptoasset analyst at multi-asset investment platform eToro.

"This means there is a possibility of buyers now stepping in to push prices up and, as we have seen before, investors waiting on the side lines are already using the sell-off we have seen to invest in cryptoassets, taking advantage of the volatility," he said.

Bitcoin has had a stellar rally, rising for eight days straight after Elon Musk made positive comments and Amazon appeared interested in crypto.

Facebook co-founder Eduardo Saverin is in talks to invest in CoinDXC that will seal the Indian crypto exchange's unicorn status, report says

Polychain Capital and Coinbase Ventures are other participants in the round that could raise between $100 to $120 million.

"When you take the long-term horizon, you don't look day-to-day, or month-to-month," MoonPay's CEO told Insider.

A strong advocate for Bitcoin, Michael Saylor, has restated his bullish stance on the cryptocurrency calling it an open-digital property network, an international trust network as well as the only asset his company, MicroStrategy, needs to have a diversified investment for the long term. Speaking to Bloomberg TV, the CEO...

How Bitcoin Has Boosted MicroStrategy’s Brand by 100x, CEO Reveals

MicroStrategy was the first publicly traded company in the U.S. to integrate Bitcoin into its balance sheet. The software company uses BTC as a hedge against inflation and has benefited from more than the performance of the asset, as its CEO Michael Saylor recently claimed. In an interview with CNBC’s...

MicroStrategy reported a paper loss of roughly $700 million on its BTC investment in Q2 2021 but vowed to continue purchasing more coins. The NASDAQ-listed software giant MicroStrategy has seen a total impairment loss of nearly $700 million in Q2 2021 from its massive bitcoin investments. As this is only on paper, though, the company pledged to double down on its BTC strategy and continue to accumulate more.

MicroStrategy reported its June quarter results on Thursday with revenue and earnings exceeding expectations. However, it is its bitcoin holdings that are driving its stock price and market cap. Business is finally seeing growth. MicroStrategy had seen its revenue decline year over year for the past six years. However, second...

With over 20 million Bitcoin wallet addresses recorded, the Bitcoin community is unarguably one of the most populous. Bitcoin users all over the world are seen on different social media networks spreading the word about Bitcoin as the technology continues to take up space in the traditional market. However, in...

Publicly traded business intelligence firm MicroStrategy is pledging to add more Bitcoin to a corporate balance sheet that already includes 105,000 BTC worth roughly $4 billion. In a statement issued before the conference, MicroStrategy CEO Michael Saylor noted: “We continue to be pleased by the results of the implementation of...

Peter Schiff: It’s Game Over if the Markets Call the Fed’s Bluff

The Federal Reserve insists inflation is “transitory” and the economy is making “progress.” Yet, it continues with the extraordinary monetary policy it launched at the onset of the COVID-19 pandemic. Meanwhile, we’re seeing all kinds of data hinting that the economy may not be as great as advertised. Despite this, and even as prices continue to spiral higher, the Fed’s only monetary policy is talk. Peter breaks it all down on his podcast and drills down to the key question: what happens if the markets call the Fed’s bluff?

Bitcoin Climbs Over $39,000 As Talk Of Amazon Acceptance Swirls, Other Cryptocurrencies Rally

Bitcoin’s price reached over $39,000 early Monday morning on speculation that Amazon may be looking to start accepting the cryptocurrency. A crypto-related job ad posted on Amazon.com fueled the surge in Bitcoin price as it was seeking an executive to develop its “digital currency and blockchain strategy,” as first reported by CoinDeck.

Why Coinbase, MicroStrategy, and Other Bitcoin Stocks Rocketed Higher Today

Elon Musk, Jack Dorsey, and Amazon might have flipped the narrative back to positive on Bitcoin. Shares of some Bitcoin (CRYPTO:BTC) stocks were up by double-digit percentages Monday morning. The original cryptocurrency was up more than 13% as of noon EDT today from where it traded on Friday, and various Bitcoin stocks and ETFs adjusted higher as well.

Why is Bitcoin going up? Cryptocurrency price increase explained after Amazon and Twitter hinted at backing

Bitcoin has seen a rise in price in recent days, partly thought to be due to Amazon showing an interest in the popular cryptocurrency. Here are the latest Bitcoin prices and what is thought to be behind the surge in prices, and how some other cryptocurrencies are doing. What are...

Bitcoin Tops $40,000 for First Time Since June as Cryptocurrency Rallies After Sell-Off

Bitcoin surged above $40,000 for the first time in nearly six weeks as sentiment turned bullish following a recent sell-off. Experts attributed the moves to a number of factors including recent bullish comments from Twitter CEO Jack Dorsey and Tesla CEO Elon Musk. Some of the concerns over the environmental...

Bitcoin recorded its greatest surge in over six weeks on Sunday, trading at over $39,000 for the first time since June 16, after reports that e-commerce giant Amazon is looking to hire a digital currency and blockchain product lead.The virtual currency, the price of which has risen by over 20 per cent in the last week, also climbed above its 50-day moving average value for the first time since 9 May.This latest surge comes after Amazon said in its jobs portal that it is looking to hire a person who will “innovate within the payments and financial systems” on their...

If someone is doing his part, that’s Michael Saylor. The MicroStrategy CEO proved that he’s a stand-up guy by sharing the knowledge on a medium-sized podcast that’s usually in Spanish. Saylor went in on the topics du jour and revealed never-before-heard secrets. What does he think about El Salvador? What’s up with the infamous Mining Council? Is MicroStrategy in a vulnerable position? Keep reading for those answers and more.