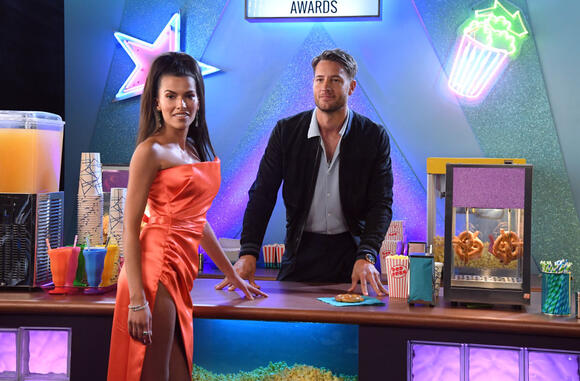 The nuptials mark the third marriage for “This Is Us” star Hartley, who finalized his divorce in February from “Selling Sunset” actress Chrishell Stause after two years married. Hartley, 44, was also married to his former “Passions” co-star Lindsay Korman from 2004 to 2012, with whom he shares 16-year-old daughter Isabella, People magazine reported.

Hartley and Pernas first sparked marriage rumors on May 2 when they were spotted wearing wedding bands on their left hands while sunning on a Malibu beach, Us Weekly reported.

A source first confirmed to People in June 2020 that the pair had been dating for several weeks, but neither made the relationship Instagram official until they shared New Year’s Eve posts acknowledging the romance.

The couple, who met on the set of “The Young and the Restless” in 2015, were first spotted in public together one year ago when 31-year-old Pernas was photographed kissing Hartley as she dropped him off at a doctor’s appointment in Southern California, Us Weekly reported.

Where Is Mariah on 'The Young and the Restless'? She Could Be in Serious Danger

The CBS soap opera The Young and the Restless has been on for years. Of course, with so much time on the air, things change. The popular show has been on for decades and always has drama that leaves you on the edge of your seat. This time, it's because the pregnant Mariah Copeland has gone missing.

Justin Hartley shared a sweet birthday tribute to his new wife Sofia Pernas on Saturday. "Happy Birthday to my beautiful Sofia!" the 44-year-old actor captioned the post. "This amazing woman makes me laugh out loud every single day. Here's to taking down oysters all over the world! I love you very much!"

Justin Hartley is showing his love for Sofia Pernas. The This Is Us actor took to Instagram to celebrate his wife's 32nd birthday with a sweet post on Saturday. Hartley, 44, shared a slideshow of photos of the birthday girl and of them together. "Happy Birthday to my beautiful Sofia!...

On Saturday, Justin Hartley took to Instagram to wish his wife Sofia Pernas a very happy birthday — but coincidentally the heartfelt post came just days after his ex-wife Chrishell Stause went public with her new man, Jason Oppenheim, leaving us to wonder whether or not there were some spiteful feelings in the mix??

This Is Us stars Mandy Moore and Chrissy Metz have wished Justin Hartley's wife Sofia Pernas a "happy birthday". The actor paid a special tribute to "beautiful" Sofia on Instagram to celebrate her special day, posting a series of pictures of the two together enjoying oysters at various restaurants. "This...

Fans have been waiting to see Justin Hartley react to Chrishell Stause dating again ever since the Selling Sunset star revealed that she’s in a relationship with her boss, Jason Oppenheim, over on Instagram. Chrishell’s ex had a subtle way of responding to the news—and it involved focusing on his new wife, Sofia Pernas, instead.

The relationship between Nicole Kidman and her daughter has been taboo for years, and people wondered whether they weren't on good terms after the actress wasn't invited to her own daughter's wedding in 2015. Isabella Cruise, the 28-year-old adopted daughter of Tom Cruise and Nicole Kidman, tied the knot in...

It looks like the walls are closing in on Tara Locke (Elizabeth Leiner) says The Young And The Restless spoilers. She came to town on a mission to be an Abbott. To that end, she revealed Harrison Locke (Kellen Enriquez) was Kyle Abbott’s ( Michael Mealor) son. A paternity test proved he was the father. But any true soap fan knows you can never trust paternity results.

Deon Richmond was a child star on several TV shows, and fans got to see him attain his coming-of-age status right there on TV. These days Deon is all grown, and he is dad to a set of twins. TV lovers became acquainted with Hollywood actor Deon Richmond when he...

WE tv viewers are mourning the death of Tracie Wagaman from the reality series Love After Lockup and its spinoff, Love After Lockup: Life After Lockup. Tracie died on July 1 at age 41, leaving behind a 4-year-old son named Isaac and a baby girl she welcomed a week before her death, according to The Sun.

"American Pickers" star Michael Wolfe is already off the market ... he's got himself a hot new girlfriend on the heels of his wife filing for divorce. Sources familiar with the situation tell TMZ ... Mike's dating a model named Leticia Cline. She's a bit of a reality TV star herself, having appeared on the old WB dating show "Beauty and The Geek."

Father-daughter date night! Julia Roberts’ 16-year-old daughter, Hazel, attended the Thursday, July 15, Flag Day premiere with her dad, Danny Moder. The teenager rocked a lace shirtdress and black Mary Janes while posing for pictures on the red carpet. She accessorized with a necklace and wore her hair in a ponytail. Moder, 52, wore a black suit for his daughter’s red carpet debut.

Is Jordi Vilasuso leaving The Young And The Restless?

Congratulations are in order for Jennifer Aniston and her family who are celebrating some happy news this week. It has been revealed that the Friends star's niece Eilish Melick, 24, and her husband Sean Nebbia, 26, have welcomed a baby boy, making her a great aunt!. Taking to Instagram, Jennifer's...

Anna Farris has confirmed she is married to Michael Barrett, not long after he was spotted wearing a simple wedding band during dinner with the star on Tuesday evening. The Mom actress, 44, revealed she and Barrett recently eloped with a courthouse marriage while talking to Top Chef's Gail Simmons on her Unfiltered podcast.

Things went left between Martell Holt and Melody Holt. “Love & Marriage: Hunstville” star Melody Holt went through a very public divorce. When viewers first met her and Martell Holt, they seemed like a true power couple. As they discussed their future moves in real estate, many weren’t aware of Martell’s history of infidelity. It was eventually revealed that Martell had a five-year affair. At times, it was hard for Melody to even discuss this. But she decided to try to work on their marriage.

Sean Carrigan Staying at THE YOUNG & THE RESTLESS!

Fans may have been surprised when Stitch returned to Genoa City but now Sean Carrigan is staying at THE YOUNG & THE RESTLESS for even longer than originally planned! The actor reprised his role in the June 25 episode and appeared for a handful of episodes before the handsome doctor left town again but now he’s back and according to the latest issue of Soap Opera Digest, the soap has asked him to stay “beyond his limited run.”

In April, news broke about the shocking death of Vine star Adam Perkins. Now, his cause of death has been revealed. According to the autopsy report obtained by “E! News,” Perkins died of accidental “multiple drug intoxication.”. The drugs found in his system were fentanyl, flualprazolam, mitragynine, ethanol, and cocaine.