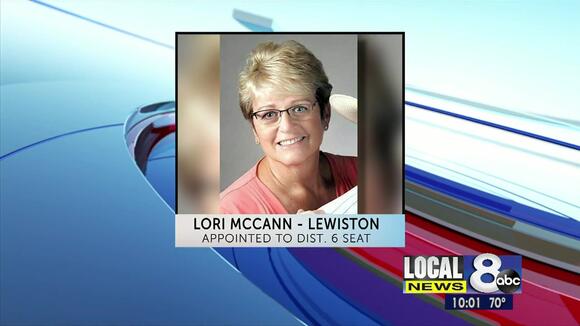 BOISE, Idaho (AP) - Idaho Gov. Brad Little has appointed Lori McCann of Lewiston to the Legislature to fill a seat left empty after the previous lawmaker resigned amid a rape investigation.

Little made the announcement Monday, saying the retired Lewis-Clark State College professor will begin serving in the House of Representatives immediately, and continue until the next general election.

The former District 6 representative, Aaron von Ehlinger, resigned last month after a 19-year-old intern reported that he raped her and an ethics committee unanimously found he engaged in "unbecoming conduct." Von Ehlinger has denied any wrongdoing and maintains the sexual encounter was consensual. The Boise Police Department is investigating the allegations, and von Ehlinger has not been charged.

The legislative ethics committee found after a public hearing that von Ehlinger had behaved unbecomingly and recommended that the full House vote to kick him out of the statehouse without pay or benefits until his term expired. But before the House could vote on the matter, von Ehlinger resigned, saying that he would no longer be able to effectively represent his constituents but maintaining his innocence.

His departure triggered a process - outlined by state law and party rules - to select a successor. The 6th District Republic Central Committee nominated and voted on eight people to replace von Ehlinger, counted up the ballots and sent a list of three names to the governor's office: Glen Baldwin, Robert Blair and Hannah Liedke.

However, after that list was sent, it was discovered that there was an error in the way the ballots were tabulated, The Lewiston Tribune reported earlier this month. The list should have included Baldwin, Blair and McCann. The error wasn't discovered until after the deadline for submitting the list had already passed, however.

The governor's office said McCann is extensively involved in the community, including serving as a board member for Idaho Business for Education and the Idaho Community foundation. She's also the incoming president for the Lewis-Clark State College Foundation board of directors.

Some of our law enforcement may be showing up at the United States-Mexico Border. The post Gov. Little declares support for border security appeared first on Local News 8.

Idaho’s May unemployment rate drops to 3%

Hundreds of people gathered at the Portneuf Wellness Center on Thursday to give thanks to our men and women in uniform. The post Pocatello hosts Law Enforcement Appreciation BBQ appeared first on Local News 8.

Idaho officials have approved payments of $1.4 million and $1.2 million, respectively, to two men who spent decades in prison for crimes they didn't commit. The post Idaho officials pay $2.6M for wrongful convictions of 2 men appeared first on Local News 8.

Pocatello will enforce a ban on certain types of fire in parts of the city beginning June 20. The post Pocatello enacts burn ban appeared first on Local News 8.

Driggs to host Gov. Little’s ‘Capital for a Day’ event

A family has said their pet dog is recovering after she was shot twice last weekend by a camper in Idaho who mistook her for a wolf. The post Idaho camper shoots family dog, mistaking it for wolf appeared first on Local News 8.

27 Idaho postal employees were attacked by dogs in 2020

Police in northern Idaho say 85 dogs were found abandoned in a home where a tenant had recently been evicted. The post 85 abandoned dogs found in Idaho home after tenant evicted appeared first on Local News 8.

Supporters of two new marijuana ballot petitions in Wyoming say they’re optimistic about getting pot questions before voters next year, especially with growing support from conservatives in the deep-red state. The post Wyoming advocates hopeful about pot initiatives despite odds appeared first on Local News 8.

Free, at-home COVID-19 tests are available in Idaho by dialing 2-1-1

Unemployed Idaho residents could get kicked out of a state benefits program if they don’t follow new job-seeking requirements that went into effect this month. The post Unemployed workers risk benefits if they skip job referrals appeared first on Local News 8.