MORRISON, Colo. (CBS4) – Red Rocks Amphitheater in Morrison has its sights set on June 21 when they’ll be able to host full-capacity concerts. On Monday, the venue’s capacity limit more than doubled, now 6,300 up from 2,800.

The first act with the above capacity will be Mt. Joy on Saturday.

Over the weekend, the venue and city of Denver hosted a pop-up vaccination clinic for concertgoers. In return, they got a t-shirt and a voucher for the concession stand. 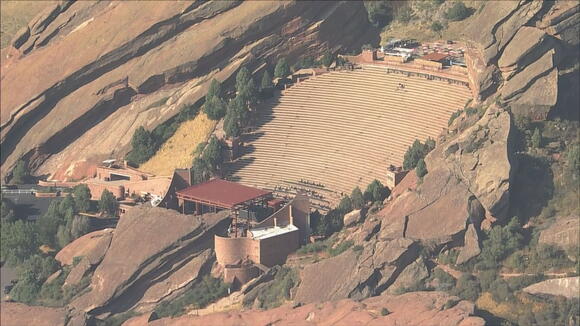 “This is one of those things where you take the vaccine to where you think young audiences are going to be and that’s who we’re trying to get to,” Brian Kitts, a spokesperson for Red Rocks, told CBS4’s Conor McCue on Saturday .

Red Rocks will make announcements each Monday about which shows you can get a vaccine, but details about the next pop-up clinic are not clear.

Masks are no longer a requirement at the outdoor venue. Red Rocks is also replacing its systems of sections divided into quadrants. Seating will be in upper and lower levels, but movement to concessions and restrooms will not be restricted.

Some high school graduations are also scheduled to be held at the venue this week.

As reported by CBS4’s Alan Gionet, the first concerts with full capacity crowds will be Widespread Panic on June 25-27.

The National Western Stock Show will return to Denver next year, after postponing this year's event due to the coronavirus pandemic.

School of Rock Colorado Live at Red Rocks! Opening for The Princess Bride – Film on the Rocks – August 2nd

Photo: School of Rock – Denver kids | Sharing this outside the rules because it’s frigging awesome. Excellent Jennifer M. Chen! Join us August 2nd as House Bands from School of Rock Colorado provide live entertainment on stage at @RedRocksCo prior to an epic showing of The Princess Bride! In partnership with @FilmOnTheRocks and @DenverFilm, this show features some of the most talented young musicians from the greater Denver area. Don’t miss hearing your rock&roll favorites performed by local students on one of the world’s most incredible stages!

Some mountain communities are altering their approach to tourism to manage guest experience amid an affordable housing crisis and subsequent labor shortage.

DENVER — The 2021 Red Rocks concert calendar is filling up this summer. The artists will be joined by Molly Tuttle at the 6:30 p.m. all-ages concert. Tickets for the Colorado concert will go on sale Thursday, July 22 at 10 a.m. at AXS.com. Ticket prices range from $46.50 to $85 plus service fees.

The Colorado Springs area hotel industry roared back to health in June with the nation’s third-highest occupancy rate, according to a report from hotel research firm STR. The 84.4% occupancy rate ranked behind only the Florida Keys and Tennessee’s Gatlinburg/Pigeon Forge area among the 165 U.S. cities tracked by STR and was well ahead of the 66.1% national average.

There are growing concerns about the Delta variant of COVID-19 in Colorado.

Even a thunderstorm couldn’t dampen Arlington’s resolve last Friday, with a full-capacity crowd present to hear blues singer-songwriter Chris Pierce at Lubber Run Amphitheater, reopening for the first time since its 50th Anniversary Season in 2019!. This coming weekend, Avant Bard presents a concert version of their hit “Gospel at...

Colorado’s Comeback: Masks Optional At CSU Next Semester; Vaccines Will Be Required

Colorado State University has announced it will no longer require masks on its Fort Collins campus.

Did MLB All-Star Game Drive Up COVID Numbers In Colorado? Doctors Are Waiting And Seeing

When it comes to COVID-19 outbreaks, health experts say we’re not out of the woods yet.

Little town has claim to Colorado's only rock-crawling park

RANGELY • At the base of a craggy ridge in Colorado’s far western desert, Shawn Morgan parks his souped-up Jeep and eyes his target. While an outsider sees a cluster of rocks, he sees a driving lane. “We call this the competition spot, or the playground,” Morgan says. The competition...

COVID In Colorado: Over 600 Cases Of Delta Variant Confirmed In Mesa County

More than 600 cases of the delta variant have been confirmed in Mesa County -- most of them in just the past two weeks.

COVID-19 forced Caritas Chorale into a silent 2020. Now, though, the singers are set to retake the stage. The group will return after its year-plus-long hiatus this weekend, July 17-18, for a pair of summer concerts. After a trying 15 months, the theme is a fitting one: “Celebrate, Honor and Remember.”

Despite Recent Rain, Drought In Western Colorado Has Become Even Worse

Even after a handful of rain events for many areas on the Western Slope in recent weeks, there has yet to be any improvement to the drought.

Big Time Rush just announced their comeback as a band on Monday morning (July 19), after much speculation over the last week. Logan Henderson, James Maslow, Carlos PenaVega and Kendall Schmidt made the big announcement with a fun video on social media. “BIG TIME RUSH LIVE! WE ARE BACK! It’s...

The current forecast smoke model has more smoke and haze returning to the state for Tuesday. However, it is not expected to be as thick as Monday.

The Friends of the Sherborn Library Summer Concert Series will begin with showcase the country rock tunes of Southbound Train from 6:30-8:30 p.m. Wednesday, Aug. 4, at Jameson Fields 1 & 2, accessible from Cemetery Lane. At the concert, shaved ice will be available for purchase from the Kona ice...

It's strangely eerie at Kanye West's Wyoming ranch, which he ditched the first chance he got to finish up his delayed album, Donda. The 44-year-old rapper left the sprawling $14.5 million property that he calls home behind and is now reportedly living in the arena where he threw his listening party last week.