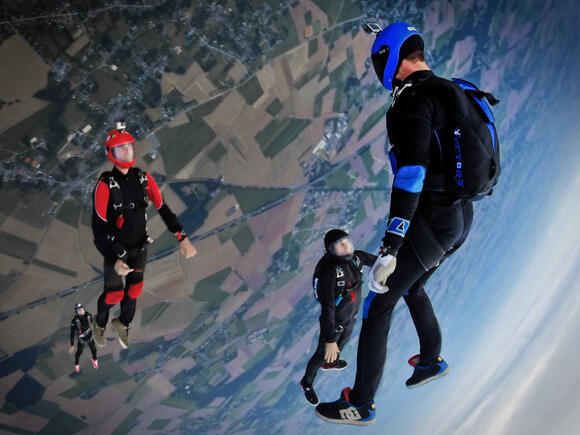 On May 16th, 2021, officials responded to an emergency call from the DeLand Municipal Airport area. The call came in at 10 a.m. and reported that there had been a horrific skydiving accident, leaving one man unresponsive.

Although skydiving accidents are rare, they still happen. This article takes a closer look at what happened on Sunday and the safety of skydiving in general. 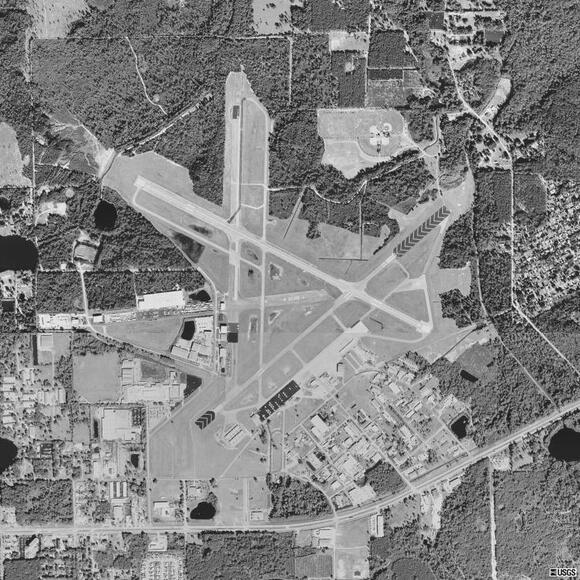 According to witnesses, two men collided mid-air after their parachutes were open. The collision caused them to go off course. One of the men was able to get his parachute open again and regain control of the situation before landing. The other man was unable to fully open his parachute after the collision.

The man, who was unable to open his parachute again, landed hard in the airport parking lot. Although witnesses tried to help him, he was unresponsive to treatment and unfortunately died from the injuries. The man's identity hasn't been released yet, nor if there were any blatant safety violations that could have resulted in the accident.

Accidents like this often leave people with an uneasy feeling, and undoubtedly raise the question: is skydiving actually safe?

Is Skydiving a "Safe" Sport? 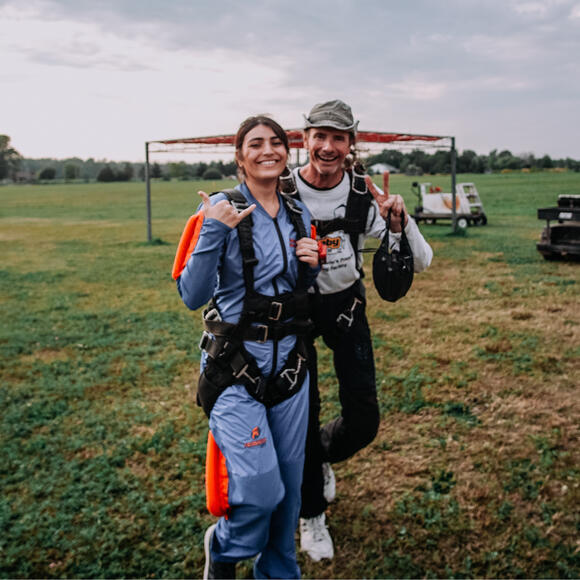 The answer is, relatively.

As with any activity or sport, especially "extreme" sports like skydiving, you can never be 100% safe. There will always be accidents or human error to account for. However, skydiving is designed to be safe when done as a professional or with a professional's guidance.

Although jumping out of a plane and diving into the big, blue sky may seem incredibly risky, it is actually a bit safer than you may realize, despite the recent accident in DeLand, Florida.

As the years have gone by and skydiving education has become more refined, accidents happen less and less. Here's a chart illustrating the average number of accidents each year. You can see that recent years have far fewer accidents. 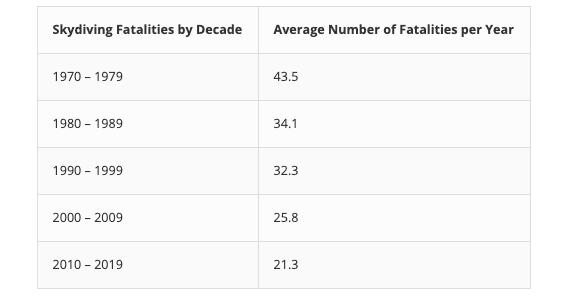 In 2018, there was a total of approximately 3.3 million jumps and only 13 fatalities. Tandem skydiving jumps are even safer because you jump with a skilled professional. The fatality rate for that is only .0002% per 1,000 jumps made!

According to the United States Parachute Association, you're more likely to die from a lightning strike, bee sting, or dog bite than from skydiving.

Of course, accidents do happen and fatalities do occur regardless of safety measures. Many condolences to the family and friends of the man who died in the recent DeLand skydiving accident.

DeLAND, Fla. – A 63-year-old man was killed Wednesday when he crashed a motorcycle in Volusia County while coming around a curve, according to the Florida Highway Patrol. Records show the man was riding south on State Road 11. Troopers said he failed to negotiate a curve and went off the road near Glenwood Road.

Police believe they located the body of a Florida man who sacrificed his life to try to save a father and his young child who were swept away from shore by a strong current, Tampa’s Fox affiliate reports. The Hillsborough County Sheriff’s Office revealed on Monday that it has found...

LONGMONT, Colo. (AP) — An investigation is underway after a man died following a skydiving accident in northern Colorado. The Times-Call reports 26-year-old Sergio Lee Gonzales, of Boulder, was severely injured in the accident at Vance Brand Municipal Airport in Longmont on Friday. He was treated at the scene by paramedics and taken to a nearby hospital, where he died.

Boulder man dies after skydiving accident in Longmont on Friday

A 26-year-old Boulder man died Friday following a skydiving accident at Vance Brand Municipal Airport. Sergio Lee Gonzales was severely injured just before 1 p.m. Friday, as reported by an airport employee. Gonzales was treated on scene by paramedics before being taken to a nearby hospital, where he was pronounced dead due to the severity of his injuries.

Florida man looking for prehistoric shark teeth survives a surprise attack from an alligator. Luckily he is alright, however he has sustained several injuries. Jeffrey Heim was diving in Southwestern Florida’s Myakka River searching for shark teeth when he was bitten by an alligator. Florida Man attack by alligator. Heim...

Mass. woman dies after being pulled from water off Florida

BIG PINE KEY, Fla. (WHDH) — A Massachusetts woman died after she was pulled from the water while snorkeling off Florida on Sunday evening, officials announced Monday. Katherine Boukharov, 25, of Melrose, was spotted face down and motionless in the water at Bahia Honda State Park around 6 p.m., according to the Florida Keys division of the Monroe County Sheriff’s Office.

A Florida man is fighting for his life in the hospital after being hit by a car, as his family works to retrieve his Marvel-themed prosthetic leg – which someone stole before police could get to the scene. Christopher Harris, 49, was crossing a thoroughfare in a crosswalk Monday at...

Do You Think Hazards Should Be Allowed While Driving? New Florida Law Says Yes

Have you ever seen someone driving in the rain with their hazards and silently passed judgment on them? You're not the only one. The general purpose of hazard lights is to signal a dangerous situation or a vehicle that's stuck on the roadside. However, a new Florida law has changed.

A teenage girl has died in a tragic training accident at a south Dublin equestrian centre this afternoon. The 15-year-old suffered serious injuries during a training exercise at the centre at Tay Lane, Rathcoole at around 2pm. Dublin Fire Brigade and the National Ambulance Service raced to the scene and...

Florida man admits on Facebook Live to killing ‘the love of his life,’ then dies by suicide

A Florida man confessed to murder online, set his condo on fire and then died by suicide, according to police. Keith Jackson, 30, called a friend on FaceTime Monday morning and admitted to killing his boyfriend; that friend then called police launching what would become an hours-long standoff between Jackson and a SWAT team, according to the Hillsborough County Sheriff’s Office.

VOLUSIA COUNTY, Fla. – Authorities are searching for a missing and possibly endangered DeLand teen and her 17-year-old boyfriend who were last seen early Thursday, according to the Volusia County Sheriff’s Office. Deputies said 16-year-old Karytza Penaand her boyfriend, 17-year-old Oscar Ochoa, were reported missing out of Lake County, where...

A man was met with an unexpected sight after leaving his shoes outside in Florida—finding dozens of bugs had moved in. The Everglades resident made the big mistake of leaving his sneakers outside his house, soon after it rained. When he went to retrieve them, he found scores of millipedes—tightly...

A 28-year-old Toronto man is dead following a skydiving incident in Innisfil, South Simcoe Police say. According to police, a plane took off with four skydivers on board shortly after 12 p.m. on Thursday. They all jumped from the plane as planned but one man was separated from the others....

A404 Marlow crash: Man in his 60s dies in serious collision with white horsebox

Thames Valley Police has confirmed that a man in his 60s died following a collision on the A404 near Marlow on Thursday (June 4). The fatal accident happened on the southbound carriageway of the A404 between Handy Cross roundabout (Junction 4 of M40/High Wycombe) and Marlow and involved a white horsebox and a pedestrian.

A man who lost consciousness mid-air during a parachute jump in northern France miraculously came to his senses just meters before hitting the ground. The man, believed to be in his 30s, suffered only minor injuries after falling unconscious a few seconds into his jump at Marquette-lez-Lille on Monday last week.

Every parents' worst nightmare is what could happen if their child was ever kidnapped. On May 18th, at about 7 a.m. as an 11-year-old girl waited for her bus, a man jumped out of a white van, charged her, and attempted to drag her back towards the van.

This Respiratory Virus Spiked in Florida, and No, It's Not COVID

New COVID cases are on the decline in Florida. Our last flu season was at a nearly all-time low. And yet, a different respiratory virus, the Respiratory Syncytial Virus (RSV) has sprung up, out of "season," and with a fast fury.