Ranking the Top Priorities Left on Georgia's Board 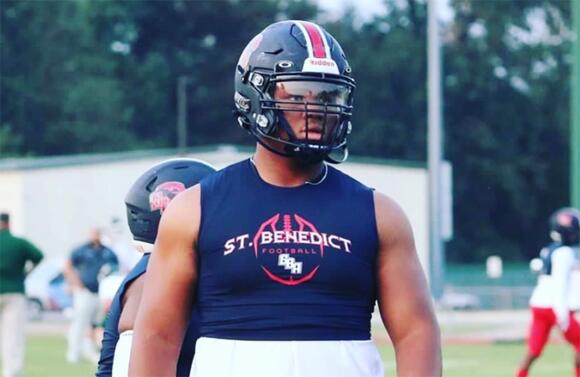 Georgia is approaching a busy month of recruiting. The Bulldogs haven't completely set their board but here are the top remaining targets according to Dawgs Daily.

However, this is how we see it as of now.

At the moment it appears that Nolen is the top priority for the Bulldogs. His recruitment has been relatively quiet to this point and no clear leader has emerged.

Nolen has played on the edge in high school but will kick inside at the next level. He is an impact-run defender from day one with the ability to become a pass rusher from the inside.

His first step off the line is explosive and tackles have a tough time putting their hands on him. He has all the size in the world but the thing that separates him is his effort level. When he wants to Nolen affects plays from start to finish.

According to sources around the program, the Bulldogs love Shaw. It will be tough pulling him away from the Clemson Tigers but don't count Georgia out. He is a close friend of current Georgia commit, linebacker Jalon Walker.

Shaw is going to wreak havoc from the inside in college. His pad level is inconsistent at times but at his very best he blows up plays before they can start.

He plays with a high effort level at all times and overpowers high school linemen with his strength. Shaw is raw as a prospect but if he fixes a few minor things will be an impact player at the next level.

Mykel Williams has the highest ceiling of any defensive line recruit this year. He will come off the edge at the next level and has been compared to current Georgia defensive end, Travon Walker.

Williams offers a little bit of everything. He can bend around the corner or bull-rush through a tackle. His first step off the line is explosive and he routinely beats linemen to the spot.

The thing that jumps off the screen when watching his tape is that Williams understands the game of football. He converts run to pass quickly and plays with superior leverage and angles.

One word to describe Kamari Wilson: smooth. Nothing about his game is rushed and at times it looks like he is gliding across the field.

He is at his best when he gets to roam the middle of the field in "robber" coverage, reading the eyes of the quarterback and making a split decision. Wilson is also a strong tackler. He patiently reads his keys, gets square, and then wraps up with solid technique.

He is part of the IMG secondary, which includes a host of players that at the moment are considering playing in Athens.

Booker is on the list because at the moment the Bulldogs have zero offensive line commits. He has a high upside and is the top priority in a relatively thin offensive line class.

Booker never lets himself get into unfavorable situations. His body is never pointed towards the sideline he comes downhill with bad intentions.

He has a mean streak when finishing blocks that is going to help him at the next level. Booker is a fierce competitor and at the moment the best option for the Bulldogs at tackle in this class.

Clemson Tigers football, Travis Shaw, Cook Out, Virginia, Clemson Tigers men's basketball, Clemson, Clemson University. Sherrod Covil committed to Clemson on June 17th, and the 4-star safety was back in Clemson for the All In Cookout on Sunday. Since his commitment, Clemson has added other pieces to the 2022 class, and Covil is working to make sure that the Tigers aren’t finished bringing in elite talent on the recruiting trail.

Why Georgia Feels Travis Shaw Could be Next Jordan Davis

Anyone who has watched Georgia football over the past few years knows how vital nose tackle Jordan Davis is to the defense. His ability to demand double teams on the interior of the defensive line opens alleys for the defensive linemen around him and the linebackers behind him. That makes him a vital piece of the defense, and one that is in his final season at Athens. So, who could replace the 6-foot-6, 330-pound nose tackle?

Georgia quarterback, mom explain why he camped at Clemson

Feel the difference - The MOST DIGITAL CONTENT covering your CLEMSON TIGERS! Avoid clickbait and sites bloated with advertising!. Four-star quarterback Malachi Singleton‍ (North Cobb High, GA) had his pick of college football camps to attend in June, but the sophomore, who passed for 1,619 yards and 15 touchdowns while also rushing for 1,091 yards and 17 touchdowns chose to workout at Dabo Swinney’s camp on June 5.

Here is the latest example of Alabama football star Evan Neal being a physical freak in the gym. The Alabama football program may have a top-five pick in the 2022 NFL Draft in offensive tackle Evan Neal, who is an absolute physical specimen at 6-foot-7 and 360 pounds. The former...

One of the very first members of Auburn’s recruiting class of 2022 has decided to re-open his recruitment. Jarell Stinson, a three-star cornerback from Opelika, announced his decision through Twitter on Wednesday afternoon. After thanking coach Bryan Harsin and the Auburn staff, he wrote “After many talks with my family, coaches, and friends I have decided that decommitting from Auburn University and re-opening my recruitment is best for my future.”

As Bryce Young prepares to take over Alabama’s offense as the starting quarterback in 2021, one former Crimson Tide signal-caller

It appears as if the marriage between Texas, Oklahoma and the Big 12 is coming to a close as the two powerhouse schools look to depart the south-midwest conference in favor of the SEC. Long have I said that both schools would be fabulous additions to the Big Ten if...

Earlier this week, Oklahoma and Texas dominated headlines when it was reported that both programs planned to leave the Big 12. According to Chip Brown of 247Sports, the founding members of the Big 12 made the decision to leave the conference for the SEC. Of course, the news shocked sports fans across the country.

What team signed Kelly Bryant, who started ahead of Trevor Lawrence?

Kelly Bryant was a backup to Deshaun Watson for two seasons. He started at Clemson in 2017, then checked out in 2018, transferring and becoming a Missouri Tiger when displaced by Trevor Lawrence as the No. 1 QB for the ACC Tigers. Watson is a Houston Texan … for now....

Alabama got some great news on the recruiting trail today when top 50 overall OT Tyler Booker committed to the Tide from IMG Academy. The football powerhouse out of Florida has become quite the pipeline for Nick Saban and company. From 247sports:. “A big man that’s all of 6-foot-5. Carries...

Picture this: it’s the first Saturday of December and a future Big Ten Championship game is only moments away from kicking off. The Ohio State Buckeyes need a win to stay alive in the new 12-team College Football Playoff. Who stands in their way? The USC Trojans. Yes, you read that right.

Auburn football: 2 SEC schools to relegate to make room for OU and UT

The college football world has been set ablaze by the news that the Oklahoma Sooners and Texas Longhorns will soon be making their way to the SEC, where some of college football’s most valuable programs play, with Alabama, Georgia, and Auburn football leading the way in the southeast. Texas and...