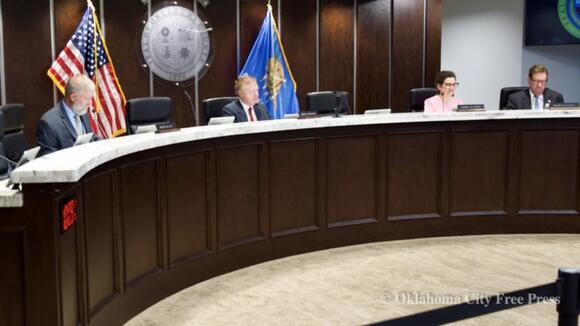 OKLAHOMA CITY ( Free Press ) — The Oklahoma County Board of County Commissioners (BoCC) met to handle a 96-item-long agenda Monday. District 2 Commissioner Brian Maughan, who chairs the Board, moved around among the agenda items in order to allow various members of staff and the community to address their items and depart from the meeting. Others had to wait.

The top order of business was to appoint a new Trustee to make up for Tricia Everest’s departure from the Oklahoma County Criminal Justice Authority (Jail Trust). The Board voted 2-1 to appoint Jim Albaugh to fill the vacancy.

The Board also voted in favor of declaring a parcel of land surplus in order to execute a Quit Claim Deed so that the property could be transferred to Tinker Air Force base in exchange for considerations.

The Board consulted with private counsel and the District Attorney’s office during Executive Session to make decisions to close some of the cases involving the County currently.

Government according to columnist Marty Peercy

After the Governor announced the appointment of Tricia Everest to a position as Director of Public Safety, members of the Board, the Jail Trust, and the community at large waited for Everest to formally resign her seat on the Trust. However, the letter came much sooner than expected.

“Her letter of resignation took us a little off guard,” Maughan said to the press after the meeting.

One person did not wait to spring into action. District 3 Commissioner Kevin Calvey reached out to Jim Allbaugh to ask if he would consider taking the seat. Allbaugh, who was once in charge of the department of corrections of Oklahoma, agreed. Calvey described Allbaugh as the most qualified potential member of the Trust.

Maughan said that Allbaugh reached out to him to ask for the seat. At that time, Maughan had somebody in mind for the position. However, according to Maughan, the person he was interested in was not interested. Maughan seemed happy to back Allbaugh in the vote on Monday.

District 1 Commissioner Carrie Blumert voiced great concern that there was not a wider search, nor more of a formal process for replacing a Trustee.

When the Trust began, each commissioner had one appointee each, and seats for the Sheriff and one Commissioner. The other four seats were community members vetted and recommended by the Criminal Justice Advisory Council (CJAC).

Maughan and Calvey each claimed that they had spoken with many members of CJAC over the weekend to get input on appointing Allbaugh. Apparently, they didn’t receive significant criticism of him.

Allbaugh was appointed by a vote of 2-1, with Blumert voting no expressly because she said she believed there should have been more of a search to fill the seat.

Allbaugh is expected to take up his duties as a member of the Jail Trust immediately.

Years ago, using Bond money, the County purchased a parcel of land abutting Tinker Air Force Base for the purpose of keeping the land free from development in order to “protect” the base.

At Monday’s meeting, the Board took the opportunity to declare the land “surplus.” In doing so they were able to execute a quit claim deed.

The land in question, valued at $5 million according to County Clerk David B. Hooten, will now be given to Tinker AFB. A contingent of people from the base were present at Monday’s meeting.

The Board and other elected officials attending the meeting had their picture taken with the representatives of the base.

One major result from Monday’s Executive Session was a decision on pending litigation.

A case naming the BoCC, Sheriff’s Office, and some former elected officials in their personal capacity as respondents styled Pendleton v BoCC et al was discussed by the Board in private.

That case, readers may remember, involved the brutal beating death of a man being held at the County Detention Center. Mr. Pendleton was locked on a basketball court with other detainees and left unsupervised. Some detainees claimed to know him from a rival gang and attacked him. He was stripped naked and left for dead before guards could respond. He died shortly after in hospital.

During Monday’s meeting the Board voted to settle, approving a stipulated judgment on $1.25 million.

Sustain our journalism by becoming a supporter

Oklahoma City Free Press is dedicated to providing high quality journalism that positively impacts our community. Click this link to support our mission.

OKCPS Board of Ed decides transparent Board seat redistricting standards

The OKCPS Board of Education adopted two key procedural changes that will have a lasting impact on the business of the board. The post OKCPS Board of Ed decides transparent Board seat redistricting standards appeared first on Oklahoma City Free Press.