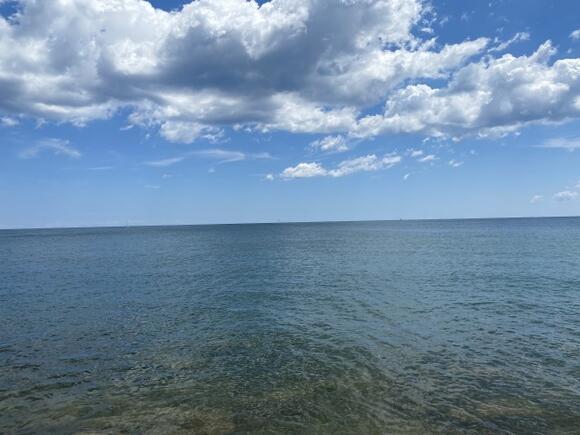 About halfway between Racine and Holland, Michigan, sensors keep close tabs on the temperature of Lake Michigan at a depth of 492 feet.

For 30 years, those sensors have reported back almost hourly.

What they say is the depths of Lake Michigan are warming and the annual "turnover" of the lake from warm to cold is changing.

"What we used to see down at 110 meters used to occur in say November. It's now occurring in January. That season has been pushed back several weeks," Stow said.

The warming isn't likely something you'd feel by sticking your hand in the water, but NOAA says it is significant.

The lake's depths have warmed .11 degrees Fahrenheit per decade for the last 30 years.

In total, a third of a degree.

It's a small change until you realize just how much water is involved.

"It's a whole lot of heat energy," Stow said. "What we're seeing is it's accumulating in the lake over that period of time."

So, what does this mean?

Warmer lake temperatures could wreak havoc on the lake's ecology.

For us on the surface, Stow says a warmer lake could shift our seasons - changing winter in Wisconsin as we know it.

If you've thought Christmas used to be colder around here, you may not just be imagining it.

"Those are all symptoms of a gradual warming that's been happening for a number of decades now," he said.

Hot and muggy start to the weekend

There is a slight chance for a morning rain shower, otherwise it is hot, hazy and steamy on Saturday with a high of 92.

Wisconsin’s former top sturgeon biologist has resigned after he was accused of lying to investigators looking into the illegal processing of sturgeon eggs into caviar.

The humidity becomes steamy on Friday with highs in the upper 80s and just an isolated chance for a shower.

Wisconsin Gov. Tony Evers is urging anyone age 12 or older who will be attending school in the fall to get vaccinated as soon as possible for COVID-19, as cases surge in the state due to the more contagious delta variant.

July 22 is officially "Bucks in Six" Day, thanks to a new proclamation by Gov. Tony Evers.

Wisconsin Democrats are demanding Republican lawmakers confirm Gov. Tony Evers' choice to replace the GOP-appointed head of the Department of Natural Resources board.

Calm and clear night with temperatures in 60's

Temperatures will fall from the upper 80s to the 60s. The best chance for a shower in Milwaukee will be between 4 and 6 p.m..

Big news from the Milwaukee Public Museum! The planetarium there will re-open on July 22nd. Videos will be played on Wisconsin's largest planetarium screen every hour between 10:30 a.m. and 4:30 p.m.