Asian American Attacks: ‘It’s In My Eyes, On My Lips;’ Two Victims Spit On While In Traffic In Oakland and San Francisco 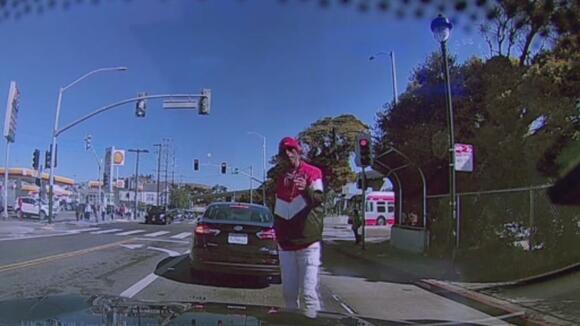 SAN FRANCISCO (CBS SF) — Two different Asian American victims say they were spit on while sitting in traffic in Oakland and San Francisco this past week, and the disturbing moments were caught on dash cam videos.

The victims say these were unprovoked attacks, and in both cases, they did not know their attackers. They told KPIX 5’s Betty Yu, they believe the separate incidents are racially motivated.

A woman named Tina, who did not want to publicly share her last name, said a man walked up to her car on 14th Street as it approached Broadway in Downtown Oakland Friday morning. He then spit on her face and yelled an expletive.

She was sitting in the passenger seat and could be heard on video telling her husband not to get out of the car.

“The car window wouldn’t go as fast as we expected so by the time he got close to me, he had already spat in the car, and on my face, and taunting us to get out the car to fight him,” she said. “It’s in my eyes, on my lips, it wasn’t a pretty sight.”

Tina is a healthcare worker and seven months pregnant. She says she rigorously washed her face immediately and took a COVID test. She also plans to take a blood test, and more COVID tests to be sure she is healthy.

When asked if she believed the attack was racially motivated:

“Definitely. If you look at the video, I think he had already targeted our car, because he was walking straight towards our car. Our windows (were) down, there were other people on the streets, he didn’t provoke anyone,” Tina said.

This past Wednesday May 12, an Asian driver was pulling up to the intersection of San Bruno and Silver Avenues in San Francisco when a man approached his car and yelled “(expletive) Chinese,” before spitting on the windshield. He told KPIX 5 that the man then walked to the driver’s side, where the window was halfway down, and spit on his face. He declined to share his name publicly.

“If you feel like something is off, just automatically, just go with your gut,” he said. “Don’t drive with your windows down – windows up. Always be aware of your surroundings, just protecting yourself, just be more vigilant, and if possible, have pepper spray.”

Both victims reported the crime to police in their respective cities, and also plan to report the incidents to the group Stop AAPI Hate, which has been tracking harassment and violence against Asian Americans since the pandemic began.

A suspect has been taken into police custody after allegedly stabbing an elderly Asian woman in San Francisco. According to ABC News, the 94-year-old woman was attacked Wednesday morning around 10:15 a.m. and rushed to a hospital. “Investigators believe the attack was unprovoked and are working to determine if race...

FRESNO, Ca (KFSN) — A difficult defendant made his way into court Wednesday afternoon to face charges of abusing a dependent adult in a FAX bus attack caught on camera. Nicholas Gilbreth says he didn’t do anything to the man, didn’t even talk to him, and has no idea why he got attacked.

Two Asian girls have been stabbed in a random attack Tuesday afternoon in a bustling San Francisco neighborhood. A person with a knife casually approached a Market Road bus cease and stabbed the 2 victims, witnesses of the broad daylight rampage informed KPIX. The scene of the stabbing in San...

SAN FRANCISCO (KPIX) — While Anh ‘Peng’ Taylor was recovering Thursday from the wounds suffered in a vicious attack on a San Francisco street, her family began sharing details of her amazing journey from war-torn Southeast Asia to the Bay Area. The 94-year-old was born in Haiphong in 1926 of...

(Justin Sullivan/Getty Images) (SAN FRANCISCO) A shooting in San Francisco's Tenderloin neighborhood on Thursday left one person with life-threatening injuries. The shooting occurred around 10:10 a.m. in the area of Market and Jones streets. Officers found a man in his 40s suffering from multiple gunshot wounds at the scene, KPIX 5 reported.

SAN FRANCISCO (BCN) Responding to to a report of a shooting just after midnight on Navy Road in Hunters Point, San Francisco police found a 24-year-old man suffering gunshot wounds. The man was transported to a hospital, where he was pronounced dead later Saturday morning. Further details were not available.

The daughter of a 72-year-old business owner who lost his eye in a knife attack earlier this month blamed, in part, the worsening crime conditions in San Francisco. Katerina Yohannes, daughter of Petros Yohannes, posted on a GoFundMe page that her immigrant parents worked at the market for 25 years and often pulled 16-to-18 hour shifts, every day.

In radio traffic recordings just released by the Valley Transportation Authority, confusion and then warnings to hide from the gunman can be heard among rail controllers, train operators and employees with radios during last month's mass shooting in San Jose.

Two warring gangs from San Francisco appear to be responsible for a mass shooting at Lake Merritt on Saturday, Oakland police said on Monday.

The sounds of a piano and people socializing filled the lounge at Lion's Den on Wentworth Place in Chinatown Saturday evening. The venue opened in March of this year as the first club in the neighborhood in nearly 45 years.

A 43-year-old repossession agent from Auburn was killed Monday in Oakland while working on assignment.

Police in San Francisco on Thursday arrested a man connected to the strong arm robbery and hit-and-run of a delivery driver earlier this month in the city's South of Market neighborhood.

Elderly Asian woman, 94, is injured after being stabbed multiple times while walking in San Francisco and man, 35, is arrested as hate crimes across the country surge 169%

An elderly Asian woman was injured after a man who has recently been released from prison stabbed her 'multiple' times in an unprovoked attack in San Francisco. Police officers were called to the scene in the Tenderloin district around 10.15am where they found Anh Taylor, 95, with multiple stabbing wounds, according to San Francisco Police Department.

One person was dead, six others wounded and two armed men arrested Saturday evening in a shooting near the shores of Oakland's Lake Merritt.

Oakland police say thousands of people were hanging out on Lakeshore Avenue at Lake Merritt when gunfire erupted Saturday evening. One person was killed and six people were injured.

Living In NYC VS San Francisco || my personal experience

Hiii In today's video, I talk about my experiences living in NYC and San Francisco. I lived in NYC from July 2019-Feb 2020 and have lived in San Francisco since then. In NYC I lived in Williamsburg and in SF I live in SOMA. I find that a lot of people are interested in my experiences living in both cities so I thought I'd compare and contrast them and end off the video by revealing which city I prefer. 📍San Francisco, CA 🎥 Vlogs, thrift, tours, tips #HiddenGems