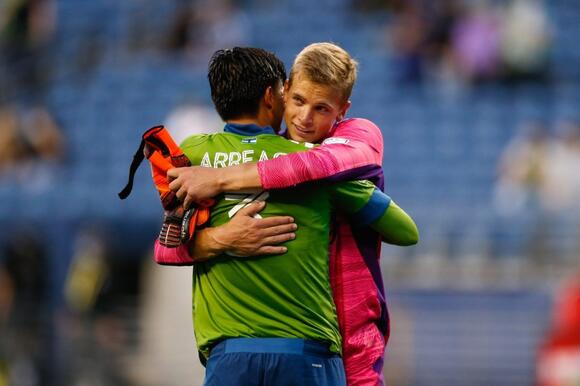 Cleveland, making his first MLS appearance since 2018 in place of the injured Stefan Frei, made three saves for the league-leading Sounders (5-0-1, 16 points), who have outscored their opponents 13-2 this season.

Frei, who missed just his sixth league match since joining Seattle in 2014, suffered a sprained left knee Wednesday in a 1-0 victory at San Jose and is expected to miss at least a month.

Arreaga scored his first career MLS goal off a corner kick from Joao Paulo in the 57th minute. Arreaga flicked on a header from the near post, and it found its way past diving LAFC goalkeeper Pablo Sisniega and into the far side netting.

Los Angeles’ Carlos Vela, the 2019 MVP when he scored a league-record 34 goals, came on as a substitute in the 70th minute. It was Vela’s first appearance since he left the season opener 22 minutes in with a quadriceps injury.

But even Vela’s presence didn’t help, as the Sounders made it 2-0 on a counterattack in the 73rd minute. Alex Roldan’s cross from the right wing found Smith at the top of the 6-yard box, and he put a forceful header into the net.

The first half was scoreless, despite Los Angeles controlling possession for much of the time. LAFC struggled to finish in the final third against Seattle’s five-man backline and put just one shot on goal.

The Sounders finally got untracked late in the first half and had the best scoring opportunity of the opening 45 minutes when Cristian Roldan found Smith just inside the top of the 18-yard box on a two-on-one break. But Smith sliced his 15-yard shot wide of the left post.

Houston Dynamo FC defeated the Seattle Sounders by a final score of 2-1 at PNC Stadium on Saturday night. In their matchup with the team atop the Western Conference table, the Dynamo were the first team to strike. Houston earned a free kick from the top of the 18-yard-box after a Joao Paulo foul in the 14th minute. Midfielder Darwin Quintero directed his teammates into position before curling a free kick onto the foot of forward Maxi Urruti, who smashed a side volley the ball past the keeper.
MLS・11 DAYS AGO
soundersfc.com

Seattle Sounders midfielder Nicolas Benezet is loving life in the Pacific Northwest. In the Rave Green’s 4-1 win over the Vancouver Whitecaps, Benezet scored the game-winning goal and nearly bagged a couple more. Since joining the Sounders two months ago in a trade with the Colorado Rapids, the French attacking midfielder has already contributed three goals and an assist from just 339 minutes of action across all competitions.
MLS・12 DAYS AGO
soundersfc.com

HOUvSEA 101: Everything you need to know when the Seattle Sounders visit the Houston Dynamo on Saturday, pres. by Ticketmaster

The Seattle Sounders are visiting the Houston Dynamo on Saturday in their second and final meeting of the regular season. Here is everything you need to know:. WHEN AND WHERE: Kickoff is at 5:30 p.m. PT at PNC Stadium in Houston, Texas. WHERE TO WATCH: The match will be televised...
MLS・13 DAYS AGO
sounderatheart.com

Vancouver entered Lumen Field on a great run of form and got to enjoy that feeling through warmups and not much longer, getting completely gobstomped and conceding within five minutes and again before 20. The Whitecaps worked hard and got a goal back before half, but Seattle was in full control, adding two more goals and missing several others in a dominant performance. Perhaps most encouraging was the tremendous play, despite the players who were gone. Playing with upwards of seven starters missing from the lineup, the bench depth was on full display. Seattle put out a squad filled with reclamation projects and bargain buys who showed just how silly their previous teams were for letting them go.
MLS・14 DAYS AGO

The Seattle Sounders are visiting the Houston Dynamo on Saturday (5:30 p.m. PT; FOX 13+, El Rey 1360AM). Here are three matchups to watch:. While Raúl Ruidíaz is in Peru, Bruin is poised to make his third straight start. The hulking No. 9 has been brilliant over the last 180 minutes, scoring once and adding two assists to help lead Seattle to two commanding wins. He’ll be up against Parker, one of the league’s best domestic center backs, trying to get his name on the score sheet yet again.
MLS・12 DAYS AGO
sounderatheart.com

Alright, I’m going to level with you: I didn’t watch last night’s match. Playing soccer always beats watching soccer for me. So, while I could give you some guidance on how to rate my match (a solid 8 thanks to two goals and several assists), I really can’t offer much with regards to your Sounders. And for that I am truly sorry. All I’ve seen are the highlights, the best moment of which was easily the Colorado announcer’s super subdued goal call in the 81st minute. Do with that what you will.
MLS・6 DAYS AGO
Denver Post

The Colorado Rapids had an opportunity to clinch a playoff berth for the second time in as many years at Dick’s Sporting Goods Park on Wednesday night. Unfortunately for the Rapids, that will have to wait for another day. A goal from Dominique Badji gave the Rapids the lead, but...
MLS・7 DAYS AGO
lafc.com

RADIO: ESPN LA 1110 AM, ESPN App (Audio), KFWB 980 AM. As the 2021 MLS season barrels to a close with three matches remaining, the Black & Gold remain in a fight for the Playoffs with each game taking on must-win status. A hard-fought 1-1 draw on Saturday in Minnesota...
MLS・2 DAYS AGO
vavel.com

LOS ANGELES — The Los Angeles Football Club tends not to get after it at practice the day before a match, let alone its fourth game in 11 days. On the rainy preamble to a rare Tuesday night Major League Soccer meeting at Banc of California Stadium, LAFC, fresh off a positive road trip to Dallas and Minnesota, went over tactics, worked on set pieces and played a little football while preparing to host the Western Conference-leading Seattle Sounders for the second time in 2021.
MLS・2 DAYS AGO
sounderatheart.com

HALFTIME: LAFC scored in the 21st and 48th minute to head into halftime leading 2-0. The first goal came from Bryan Rodriguez, who beat Stefan Frei five-hole. The second goal came from Latif Blessing, who was first to a deflected cross to finish on the doorstep. LINEUPS: The Sounders made...
MLS・1 DAY AGO

The Seattle Sounders are looking to bounce back from Saturday’s 2-1 home defeat to Sporting Kansas City and extend their lead atop the Western Conference in a Tuesday night tilt against playoff hopeful LAFC. While both sides will be without key contributors due to injury and suspension, the teams look...
MLS・2 DAYS AGO
sounderatheart.com

What once looked like a comfortable spot atop the Western Conference now appears to be a bit more precarious. The Seattle Sounders come into tonight’s game on a three-game winless run, tied for their longest of the season, while LAFC are unbeaten in four straight. Here’s what we’ll be particularly...
MLS・1 DAY AGO
soundersfc.com

LAFC defeated the Seattle Sounders 3-0 on Tuesday night at Banc of California Stadium in Los Angeles. Brian Rodríguez opened the scoring for LAFC in the 21st minute when he slotted a one-timed finish through the legs of Stefan Frei. Latif Blessing doubled the lead for the hosts in the...
MLS・1 DAY AGO
Derrick

LOS ANGELES (AP) — Cristian Arango continued his scoring tear with his seventh goal in four matches, and Los Angeles FC stayed in the MLS playoff race with a 3-0 thrashing of the Western Conference-leading Seattle Sounders on Tuesday night. Brian Rodríguez and Latif Blessing scored in the first half...
MLS・1 DAY AGO
lafc.com

LAFC rode a dominant first half to three huge points in the Audi 2021 MLS Cup Playoffs race, cruising to a 3-0 victory over the Seattle Sounders at Banc of California Stadium on Tuesday behind goals from Brian Rodriguez, Latif Blessing and Cristian Arango. The hosts controlled the contest from...
MLS・1 DAY AGO
sounderatheart.com

After a frustrating loss at home to Sporting KC over the weekend, the Seattle Sounders traveled down the coast to play LAFC and got the doors blown off for their trouble. LAFC handed the Sounders a 3-0 loss that easily could have been worse if not for a couple of vintage Stefan Frei saves. Seattle came close to getting off the mark a couple of times, but never really looked much like they were going to give the hosts any trouble.
MLS・1 DAY AGO
Walla Walla Union-Bulletin

Too many matches in a short span catch up with Sounders, who lose 3-0 at LAFC

On nights like Tuesday, Oct. 26, the soccer calendar needs to be considered. Multiple three-match weeks. Since Major League Soccer’s delayed start in April due to contract negotiations with its players, it seemed league matches were jammed into an already packed international slate. The Sounders FC played in bunches this...
MLS・1 DAY AGO