Dozens of railcars pile up, catch fire after derailment in Iowa town; evacuations ordered due to ammonium nitrate cargo 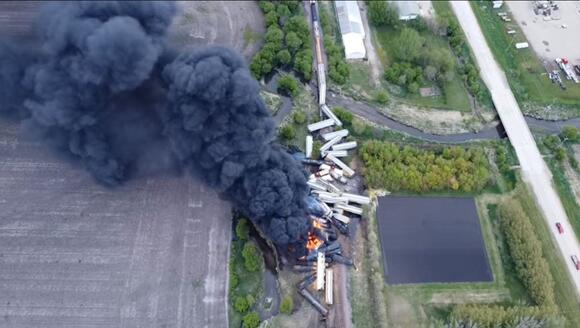 A train derailed in the far northwest Iowa town of Sibley on Sunday afternoon, leading authorities to order evacuations in the area out of concern about ammonium nitrate carried by the trains.

Aerial video of the scene showed dozens of train cars piled up and flames and a large plume of black smoke rising from the front of the pileup. There were no immediate reports of injuries.

Sibley, a town of about 3,000 people in Osceola County, is roughly 200 miles northwest of Des Moines.

The N'West Iowa REVIEW reported that the derailment happened around 2 p.m., and a 5-mile radius was evacuated.

The derailment happened on a Union Pacific railroad, according to information from the Iowa Department of Transportation website.

Union Pacific spokeswoman Robynn Tysver told The Associated Press that 47 railcars came off the tracks, but the crew was not injured. She said the railroad is working with authorities, and the cause of the derailment is under investigation.

Nate Minten of Sibley said he was at his mother’s house when the derailment happened to the south, at the edge of town. He posted drone footage of the train car pileup on his Facebook page.

“I could see smoke filling up a couple hundred feet at least,” Minten said. “We didn’t hear any bangs or anything.”

Minten said smoke was still visible hundreds of feet in the air from his mother’s home as of 4:30 p.m. Sunday. He said he got an emergency text about an evacuation order for Sibley.

There was a chemical smell in the air around 5 p.m., said Jared VanderVeen, who was visiting family Sunday. Authorities blocked off all roads into town, he said.

Robin Eggink and her husband, Scott, from Vinton, were visiting family and eating at a Pizza Hut outside Sibley early Sunday afternoon when they noticed the train slowing down. Eggink said the train stopped – they assumed for some equipment or a break. After a few minutes, she and her family noticed a big cloud of smoke as they left the restaurant. Her husband drove them near the site to see what was going on.

“The fire trucks started coming around and telling everyone we have to evacuate,” Eggink said.

The train derailment happened over a bridge that collapsed, Eggink said. She said the train was split in two, on different sides of the bridge.

What is ammonium nitrate?

The material does not readily burn but will do so if it's contaminated with combustible material, according to the biotech library, and will accelerate the burning of combustible material. If it combusts, ammonium nitrate will produce toxic oxides of nitrogen.

The derailment happened one day after 28 of 50 cars on a Union Pacific train were overturned Saturday in Albert Lea, southern Minnesota.

Aug 5 (Reuters) - Apple Inc (AAPL.O) on Thursday said it will implement a system that checks photos on iPhones in the United States before they are uploaded to its iCloud storage services to ensure the upload does not match known images of child sexual abuse. Detection of child abuse...

(CNN) — President Joe Biden signed a bill into law at the White House on Thursday to award congressional gold medals to the police forces that responded to the insurrection at the US Capitol on January 6. The Congressional Gold Medal is the US Congress' "highest expression of national appreciation...

End of an era: Barcelona says Messi won’t stay with the club

MADRID (AP) — Lionel Messi’s time at Barcelona appears to be over. Barcelona announced Thursday that Messi will not stay with the club, saying that the Spanish league’s financial regulations made it impossible to sign the Argentina star to a new contract. He is leaving after 17 successful seasons in...

US to probe Phoenix police over excessive force allegations

WASHINGTON (AP) — The Justice Department on Thursday said it was launching a widespread probe into the police force in Phoenix to examine whether officers have been using excessive force and abusing people experiencing homelessness. The investigation into the City of Phoenix and the Phoenix Police Department is the third...

WASHINGTON — Gov. Andrew Cuomo was told on Thursday to provide any final evidence in his defense as state lawmakers wrap up their impeachment probe over allegations he sexually harassed 11 women. “We write to inform you that the committee’s investigation is nearing completion and the Assembly will soon consider...

AFL-CIO President Richard Trumka has died at the age of 72, the labor organization said Thursday. "The labor movement, the AFL-CIO and the nation lost a legend today,” AFL-CIO Communications Director Tim Schlittner said in a statement. “Standing on Rich’s shoulders, we will pour everything we have into building an...

WASHINGTON, Aug 5 (Reuters) - A U.S judge early Thursday ordered the Biden administration to quickly respond to a legal challenge to a new eviction moratorium put in place by the Centers for Disease Control and Prevention (CDC). U.S. District Judge Dabney Friedrich ordered the Justice Department to respond by...

The Congressional Budget Office (CBO) on Thursday released an analysis saying the $1 trillion bipartisan infrastructure package would add $256 billion to the federal deficit over the next decade, a difficult pill to swallow for GOP senators who have insisted on paying for the entire cost of the legislation. The...

Former Secretary of State Mike Pompeo said he has "no idea" about the whereabouts of a nearly $6,000 bottle of whisky that was apparently gifted to him by Japan, hinting that it could have gone missing due to State Department "incompetence." The comments come after it was reported that State...

The inauguration of Iran’s hard-line new president Thursday and the country’s increasingly aggressive approach to the outside world could spell the end of President Joe Biden’s bid for diplomacy with Tehran, experts say. In the weeks leading up to Ebrahim Raisi’s swearing-in as president, the regime has adopted a combative...