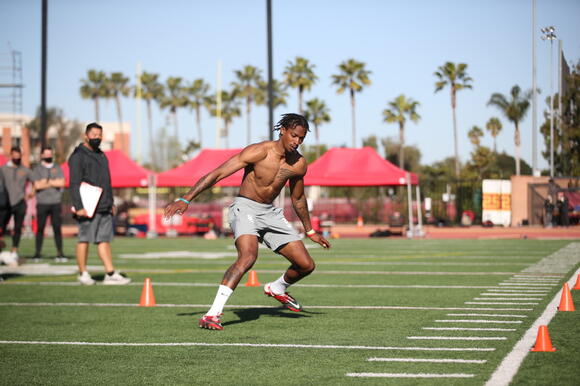 After the 2021 NFL Draft wrapped up, former USC wide receiver Tyler Vaughns signed a deal with the Indianapolis Colts as an undrafted free agent.

Although Vaughns' options were slightly more restricted than being a solidified draft prospect, he shed some light on why he ultimately chose the Colts in the end.

"I was kind of not too familiar, but familiar in what they ran and the type of offense they were in. I felt like I could fit that offense better."

According to Joel A. Erickson, IndyStar reporter, the team gave Vaughns a $22,000 signing bonus after they struck a deal.

Vaughns joins former USC Trojan Michael Pittman Jr., who also plays wide receiver. Pittman Jr. had a breakout rookie season in 2020, and made his mark in Indy. On the defensive side of the ball, Vaughns joins defensive tackle Antwaun Woods, who left USC in 2016 and signed a one year deal with the Colts after being released by the Cowboys on May 11.

Vaughns spent five seasons with the USC Trojans after redshirting back in 2016. He was highly productive for USC, totaling 222 passes for 2,801 yards and 20 touchdowns in his career.

Do you think Tyler Vaughns can make an immediate impact for the Colts? Comment and join in on the discussion below!

Coaches Poll Top 25: USC Trojans move up to No. 6 in college football rankings

USC escaped Corvallis with a scrappy 17-14 victory over Oregon State on Saturday night. On Sunday morning, they rose in the college football rankings. The Trojans are ranked No. 6 in the newest Coaches Poll, which is voted on by 66 Football Bowl Subdivision coaches. That's one spot higher than last ...
LOS ANGELES, CA・6 HOURS AGO
AllTrojans

All eyes were on Corvallis Saturday night as the USC Trojans battled the Oregon State Beavers in a battle of unbeaten teams. Lincoln Riley's Trojans (4-0, 2-0) faced their toughest test of the young season against an experienced and tough Beavers team, and they emerged with a 17-14 victory that ...
LOS ANGELES, CA・18 HOURS AGO
AllTrojans

Dolphins Defense Delivers With Game on the Line

The Miami Dolphins defense did a lot of bending against the Buffalo Bills in Week 3 but it stood tall to help deliver a victory
MIAMI, FL・23 MINUTES AGO

The Atlanta Falcons grabbed their first win of the season against the Seattle Seahawks in a 27-23 victory. Cordarrelle Patterson led the way with 131 rushing yards.
ATLANTA, GA・15 MINUTES AGO
Sports Illustrated

He was 10–28 in his four-plus seasons at the helm.
ATLANTA, GA・24 MINUTES AGO
AllTrojans

Williams currently has the second-best odds to win the 2022 Heisman Trophy behind only Ohio State's C.J. Stroud
LOS ANGELES, CA・2 DAYS AGO
AllTrojans

California is loaded with high school football talent, and on any given Friday night you can watch dozens of future college football players - including future USC Trojans Malachi Nelson, Makai Lemon, Christian Pierce and more. Week 5 of the 2022 CIF high school football season is underway across ...
HIGH SCHOOL・1 DAY AGO

Tackett Curtis is the real deal. The four-star linebacker and USC commit led Many High School (Louisiana) to a 25-17 upset of Isidore Newman and five-star quarterback Arch Manning on Friday night.  Not only did Curtis delivers huge hits from his linebacker position - he also took almost every ...
LOS ANGELES, CA・1 DAY AGO
AllTrojans

With 2:51 left in the game, trailing Oregon State 14-10 and facing a fourth down and six at their own 43-yard line, it looked like the USC Trojans needed a miracle. The play clock was running down, the Trojans offense looked out of sorts - like it had all night - and USC fans were wondering why ...
LOS ANGELES, CA・17 HOURS AGO
HoosiersNow

Indiana basketball hosted official visits for a pair of five-star prospects from Montverde Academy, Derik Queen and Liam McNeeley. Indiana coach Mike Woodson recruited Jalen Hood-Schifino and Malik Reneau out of Montverde in the class of 2022.
BLOOMINGTON, IN・23 MINUTES AGO
AllTrojans

Notre Dame's loss could be USC's gain. Four-star offensive tackle Elijah Paige decommitted from the Fighting Irish on Thursday, opening the door for the Trojans to land the coveted lineman. Paige, who is 6-foot-7 and 304 pounds, is rated the nation's No. 24 offensive tackle and has accumulated more ...
LOS ANGELES, CA・2 DAYS AGO

The Pac-12 football picture will start to look a lot clearer after Saturday. With a full slate of conference games, fans will start to see early separation between the pretenders and contenders. USC, sitting at 3-0 overall and 1-0 in the Pac-12, has a chance to take advantage of multiple scenarios ...
PULLMAN, WA・1 DAY AGO
AllTrojans

Lincoln Riley's USC Trojans held firm in their spot atop the Fan Nation/Sports Illustrated Pac-12 Football Power Rankings this week. But the Trojans will face their toughest test of the season on Saturday against an experienced and hungry Oregon State team. Both teams enter the matchup 3-0 - two of ...
LOS ANGELES, CA・2 DAYS AGO