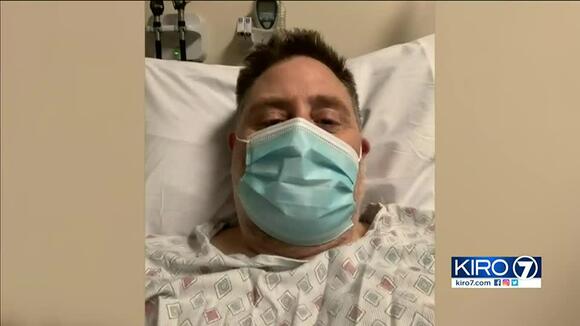 KING COUNTY, Wash. — Morning commuters know KIRO-Radio’s Chris Sullivan well as “Sully, the traffic chokepoint guru.” But when he contracted COVID-19 two-and-a-half weeks ago, he said he wondered if he would survive. After losing more than 20 pounds, and making three trips to Evergreen Health in Kirkland for IV fluids, he said only now is he feeling the beginning of recovery.

Sullivan had family travel plans that included long drives to visit his son, Tommy, a long-snapper on the Montana State University football team. He decided to wait on the COVID-19 vaccine because he once had a terrible reaction to the shingles vaccine. He didn’t want to get the shot, or side effects, before a road trip.

“I was like, ‘OK, let’s get through those and see how I do.’ I didn’t want to have a bad reaction,” Sullivan said.

He also had taken precautions, by frequently wearing a mask. But within three days after visiting Montana, he became seriously ill. “COVID basically attacked my entire system, one component at a time,” he said. “It was almost like it was toying with me.”

Sullivan had to be treated at the emergency room at Evergreen Health three times. He was too sick to eat for 10 days.

“It just kept moving methodically and testing and jabbing and poking my perimeter,” he said. “Every time I fought it, it decided, ‘OK, fine, I’m going somewhere else.’ And it was relentless, it hit everything.”

The once stocky strong guy took a photo to show his listeners how a lot of his body mass was gone in days. He credits his wife with encouraging him to try to eat.

Now, Sullivan is sharing his story as a cautionary tale for people hesitant to get the vaccine. “I probably should have, if I was able to earlier, just go ahead and get that COVID shot. Don’t let your guard down, because this thing can grab you and it can not only knock you down, but it can take you.”

Sullivan understands there are many reasons why people may choose to delay the vaccine, or not get vaccinated at all, but he said he wishes he had made different choices for himself.

“If you have the chance to get the shot, you should take it,” he said.

Funny how we never hear about those who survived with minimal symptoms. And, why is it that those who are hospitalized take close up selfies? I’ve seen and been in an ICU room and a regular ER room and there’s a lot that should be in a picture...when you’re that ill you’re not taking a selfie you’re hoping you don’t die.

You must of got the ultra ubber rona-19 virus. .. everything you mentioned is NOT the common symptoms of rona-19. sounds like you already have serious issues

Doesn’t sound like you had the COVID….love how no other form of hospitalization is identified for any other diseases..the flu, pneumonia, bacterial infections, cancer, food poisoning…you name it…has to be COVID. I wonder how many people are told that…you have COVID…and they believe it. My friend had been in and out of the hospital from failing kidneys, due to her drinking and cirrhosis of the liver..her diagnosis…but she died of COVID…really. My boyfriend was tested for COVID..tested negative…but when he got his insurance statement…it said…upper respiratory disease COVID 19!!! Not even that it was a test!! This is the kind of BS, and propaganda the government, medical facilities and media to spread the BIG LIE!

SEATTLE — As October begins, health experts are warning about a COVID-19 surge this fall and winter. King County Health Officer Dr. Jeff Duchin said a surge is likely, but it is not known how severe it will be. Duchin is urging people to get the new booster shot....
KING COUNTY, WA・1 DAY AGO
KIRO 7 Seattle

2 minutes or less: Local firefighter faces off against Domino’s worker

PIERCE COUNTY, Wash. — After visiting a Domino’s store this week, firefighters from Central Pierce Fire & Rescue learned they have something in common with the chain’s pizza makers: they both have a “two minute or under standard.”. Domino’s pizza makers have to make a pizza...
PIERCE COUNTY, WA・7 HOURS AGO
KIRO 7 Seattle

A homeless encampment that was cleared out along the Green River just outside the city of Kent is back. The county has been handing out and posting flyers letting those staying here know they will need to leave by Oct. 12. “What you’re seeing along Green River Road is just...
KENT, WA・3 HOURS AGO
KIRO 7 Seattle

TACOMA, Wash. — In an interview with KIRO 7 on Tuesday, Tacoma Mayor Victoria Woodards discussed her priorities for the city, which is facing a disturbing rise in crime. Violent crime in Tacoma has nearly doubled in the past year, which resulted in new Police Chief Avery Moore launching a crime reduction plan.
TACOMA, WA・1 DAY AGO

Kirkland ranks No. 3 on Money Magazine’s list of 50 best places to live in US

KIRKLAND, Wash. — Money Magazine has released its latest ranking of the 50 best places to live in the U.S., and Kirkland is one of just two Washington cities to make the list. Kirkland earned the No. 3 spot on the list, landing just below Atlanta, Georgia and Tempe,...
KIRKLAND, WA・1 DAY AGO
KIRO 7 Seattle

Drivers in Seattle should be aware of two highway projects that could snarl traffic this weekend. The Washington State Department of Transportation announced that the State Route 99 tunnel will fully close in both directions starting Friday at 10 p.m. through Saturday at 6 a.m. The ongoing Revive I-5 work...
SEATTLE, WA・2 HOURS AGO
KIRO 7 Seattle

SEATTLE — The King County Jail in Seattle has been using bottled water throughout the facility since receiving reports on Sept. 29 about the tap water being discolored. Officials said they were distributing bottled water “out of an abundance of caution.”. While the county’s facilities management division has...
SEATTLE, WA・3 HOURS AGO
KIRO 7 Seattle

SEATTLE — A bat that was found in the parking of some condominiums near Seattle’s Alki Beach was determined to be rabid. The rabid bat was found at the Duwamish Head Condominiums located at 1140 Alki Ave. SW. Public Health — Seattle & King County said the bat...
SEATTLE, WA・43 MINUTES AGO

SEATTLE — Two teenagers were taken to Harborview Medical Center after a shooting in a Pioneer Square crime “hot spot” on Wednesday night. At 11:30 p.m., Seattle police officers were called to Second Avenue and Yesler Way for a shooting that happened in an alley behind a bus shelter.
SEATTLE, WA・13 HOURS AGO
KIRO 7 Seattle

SEATTLE — A gas leak that caused an evacuation of several people from their West Seattle homes has been capped by Puget Sound Energy crews. Firefighters were called near the 5600 block of 30th Avenue Southwest for reports of a natural gas leak. No one was injured and residents...
SEATTLE, WA・1 DAY AGO
KIRO 7 Seattle

SNOHOMISH COUNTY, Wash. — A section of U.S. 2 has reopened after it closed again on Wednesday due to the Bolt Creek Fire near Skykomish. It’s been nearly a month since the fire started. The Washington State Department of Transportation closed the highway again for the same reason...
SKYKOMISH, WA・1 DAY AGO
KIRO 7 Seattle

2 injured in drive-by shooting at mini-mart in Renton

RENTON, Wash. — An investigation is underway after two men were injured in a shooting Monday night in Renton. Officers were called at 8:47 p.m. to the 200 block of Rainier Avenue. Police said one man was taken to Harborview Medical Center after being shot at an ampm mini-mart.
RENTON, WA・2 DAYS AGO

15 mayors band together to improve safety in Snohomish County

SNOHOMISH COUNTY, Wash. — Fifteen mayors from across Snohomish County have formed a coalition to reduce crime and increase safety. The Mayors and Business Leaders for Public Safety coalition aims to address public safety concerns like closing gaps in charging and sentencing people who continuously commit crimes. “We have...
SNOHOMISH COUNTY, WA・2 DAYS AGO
KIRO 7 Seattle

‘This shouldn’t even have happened’: Family reacts to arrest of man connected to human remains case

Seattle police have arrested a man in connection with the remains found near the University of Washington in June. Family members of 56-year-old Mavis Kindness Nelson say they have mixed emotions after speaking with detectives on the case — they are sad Nelson is no longer here, but they are happy to see progress has been made in the case.
SEATTLE, WA・33 MINUTES AGO
KIRO 7 Seattle

It’s officially fall, which brings pumpkin patches and fall festivals! For many Seattleites, that means heading out of the city to farms. One of the oldest pumpkin patches around, and the original one in Snohomish is Craven Farm. They’re celebrating their 40th year of pumpkin patches this Saturday!
SNOHOMISH, WA・7 HOURS AGO
KIRO 7 Seattle

Youth football gear, a playbook and other items were stolen from the car of a youth football coach in Lacey, according to the Lacey Police Department. At about 12:37 p.m. on Oct. 5, the suspects stole a bag containing the items from the vehicle of a North Thurston High School football coach.
LACEY, WA・10 HOURS AGO
KIRO 7 Seattle

BELLINGHAM, Wash. — A Burlington man will spend the rest of his life in prison after being convicted of killing his girlfriend. Prosecutors said Rigoberto Galvan, 24, shot and killed Stephanie Cresswell-Brenner, a 22-year-old Western Washington University student, after breaking in through a second-floor balcony on Aug. 14, 2019.
BURLINGTON, WA・2 DAYS AGO
KIRO 7 Seattle

One critically injured after collision with train in Kent

A person was critically injured after a collision with a train on Sunday in Kent. At around 4:30 p.m. Sunday, medics with the Puget Sound Regional Fire Authority responded to a report of a car that was hit by a train. According to the Seattle Times, there was one person...
KENT, WA・2 DAYS AGO
KIRO 7 Seattle

SUMNER, Wash. — A Sumner city council member has been stripped of some of his responsibilities after he was linked to a racist meme. Patrick Reed, who also works as a public government affairs manager for the Secretary of State’s Office, was accused of sending a racist meme in an email with another state employee in August.
SUMNER, WA・2 DAYS AGO