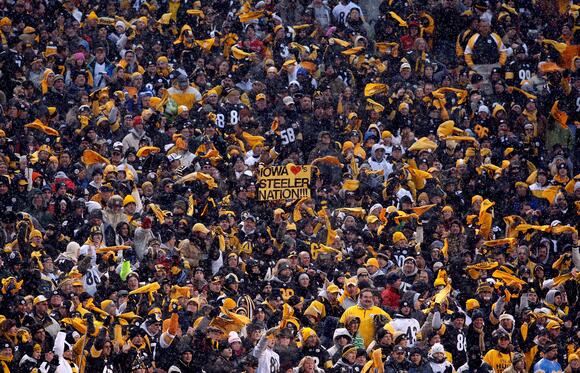 PITTSBURGH — After it was announced the Pittsburgh Steelers 2021 season schedule was the hardest in the NFL, the team is looking forward to having fans at Heinz Field.

“The trends are all headed in the right direction, and we’re excited about getting our fans back in the stadium,” he told Steelers.com.

As for Training Camp, it’s still uncertain if it will take place at St. Vincent College in Latrobe.

“I wish I could say it’s a done deal,” Rooney said.

He said the team is preparing to have it in Latrobe, but there are still some issues to iron out with the Players Association and COVID-19 protocols. Last year was the first time it wasn’t held in Latrobe in more than 50 years.

Coming at you with an early… and I mean early, 53-man roster prediction for 2021. The Steelers are coming off a strong 2020 regular season along with a poor postseason. Many changes have come in this offseason: releases, retirements, free agency departures/acquisitions, and draft picks. Let’s start with releases and...

The 2021 NFL season is creeping closer by the day, with rookie camp in the books the Steelers training camp roster is all but set. We already know who the big players will be, but who among them will lead the Steelers in major individual stats categories? Below we will predict just that with our stat leader predictions.

These are the Packers games fans are looking forward to most, according to ticket prices

GREEN BAY – Green Bay Packers ticket prices reflect fans' optimism that Aaron Rodgers will be under center more than the fear that he will not again wear a Packers uniform. When the NFL assembled its 2021 schedule, it clearly had in mind that Rodgers would be the Packers' quarterback, but, as always, other factors come into play. Among them, the fact that the league anticipates full stadiums this year, the quality of opponents and timing of games.

The Pittsburgh Steelers were dealt no favors by the leaguewide salary cap situation this year, and one can certainly argue that it cost them some of their effective as a defense to rush the passer. Not only did they lose one of their primary rushers in Bud Dupree, they also lost two starting cornerbacks, which will have the consequence of allowing quarterbacks to get rid of the ball more quickly, and thus giving rushers less time to get into the backfield.

Which players are in line to earn big-money contracts in the near future? Anthony Holzman-Escareno takes a look into his crystal ball to project the All-Paid Team of Tomorrow, listing the top candidate to become the next player to push for the rank of highest paid at each position, along with other players who are on the big-money radar (note that contract information is sourced from Over The Cap and/or Spotrac):

The Pittsburgh Steelers lost a lot of talent this offseason, whether it was through retirement, free agency, or the cost of remaining compliant with the salary cap. Among the departures were Bud Dupree, Steven Nelson, Mike Hilton, Alejandro Villanueva, Maurkice Pouncey, Matt Feiler, and Vance McDonald, with the outside linebacker, offensive line, and cornerback positions all being hit hard.

Mock: Steelers go with OU QB in first round of 2022 draft

CBS Sports has revealed their first mock of next year’s draft using Super Bowl odds from SportsLine. They have the Steelers picking 13th overall and taking quarterback Spencer Rattler out of Oklahoma.

Offensive tackle Zach Banner #72 of the Pittsburgh Steelers. (Photo by Katharine Lotze/Getty Images) The Steelers enter camp with a slew of players new and old, but these five options are the easiest to root for based on their incredible journeys. To make it to the NFL in any sort...

Steelers 2021 Training Camp Battles: Who will be the Steelers’ primary backup pass rusher?

The Pittsburgh Steelers are still in the early stages of the 2021 offseason, but with the 2021 NFL Draft over the attention now turns to the regular season. There are steps along the way, mandatory minicamp, Organized Team Activities (OTAs) and training camp, but the position battles which will take shape throughout the offseason are worth discussion.

It doesn’t matter how good an NFL team is, there is always a desire to add pieces in order to make it even better. As is often true with Steelers Nation, many fans are hoping for the Steelers to continue to add players through free agency even though it is already the month of June. But is this really the best interest for the team?

It’s hard to believe but the Pittsburgh Steelers 2021 Training Camp is right around the corner. As we countdown the days until camp begins, each week SCU will highlight one position group, detailing the players who will be competing for a spot on the Steelers final 53-man roster at the end of this Summer.

JuJu Smith-Schuster essentially tabled his free agency until 2022, re-signing with the Steelers on a one-year deal. He will have a new agency negotiating his next contract. A reduced salary cap depressed the market for most players, and Smith-Schuster was no exception. Although the Ravens are believed to have offered more, with the Chiefs entering the mix as well, Smith-Schuster opted to re-sign with the Steelers on a one-year, $8MM deal. Several marquee UFAs agreed to one-year pacts, but the cap is expected to balloon north of $200MM in 2022. Teams look set to have more money to spend next year, and more long-term contracts will likely be offered.

The start of free agency was a rush of activity for the Pittsburgh Steelers. Unfortunately, most of the action was negative for Pittsburgh as they lost multiple players to free agency and retirements. Fortunately, the offseason did something of a 180 and the Steelers were able to re-sign several guys...

TJ Watt is in the final year of his contract with the Pittsburgh Steelers. Like his older brother, the young Watt developed into one of the more feared pass rushers in the league over the last few seasons. Surely the Steelers want to keep him long term but the contract...

In a time where many places are projecting their thoughts about players for the 2021 season, there are still some metrics coming in using strictly data from this past year. One such ranking is nfl.com releasing their top 10 coverage players in 2020 using Next Gen Stats. So what exactly...

PITTSBURGH (AP) — Pittsburgh Steelers quarterback Ben Roethlisberger recently expressed the challenges of learning a new offense in his 18th NFL season. First-year offensive coordinator Matt Canada intends to build off the strengths of the two-time Super Bowl winner, while also placing a renewed emphasis on a run game that is expected to feature rookie Najee Harris after finishing last in the NFL in 2020.

ESPN NFL analyst Adam Schefter, free-agent edge rusher Ryan Kerrigan is signing a contract with the Philadelphia Eagles. This is relevant to the Pittsburgh Steelers because according to Schefter, the Steelers were one of the teams in on trying to sign Kerrigan before he chose the Eagles. Kerrigan was one...

When I started college way back in the mid 90’s I had a real junker of a Volkswagen Rabbit. Poop brown, and barely able to accelerate on the highway, it was a nightmare in several ways. It was my first ever car, so there was some sentimental value, and I didn’t have much extra spending money, but I realized it was time to move on into something that wasn’t going to spontaneously fall apart. Why start my first player outlook of the 2021 season with this vehicular-based aside? I see a direct correlation between that car, Ben Roethlisberger, and the Steelers. Playing the role of the poop brown Rabbit is Big Ben, who despite finishing with the 4th 30+ touchdown season of his career, failed to be able to carry this offense down the stretch. Instead of cutting bait and trying to retool a deteriorating roster, the Steelers instead brought back Ben, drafted a running back in Round 1, and seemed determined to try and keep pace with the young guns in the division. Will the old vet find his mojo in likely his last season for the Steelers, or will the wheels truly and finally come off a few miles down the highway?

The Pittsburgh Steelers are at Heinz Field for their 2021 minicamp. It will be the first time the Steelers entire offseason roster will be together, as well as the last time until training camp begins at the end of July. When it comes to reports from mandatory minicamp, there may...

The Steelers lost Bud Dupree to the Titans this offseason, but here’s why T.J. Watt thinks that Alex Highsmith is going to ‘make teams pay’ this year. Losing Bud Dupree could prove to be a big loss for the Pittsburgh Steelers in 2021… or perhaps not. After looking like a potential bust to begin his NFL career, Dupree finally kicked things into gear in his fifth season in 2019. He followed up his most productive campaign with another solid showing in 2020 before an ACL tear cost him the last five games of the season.