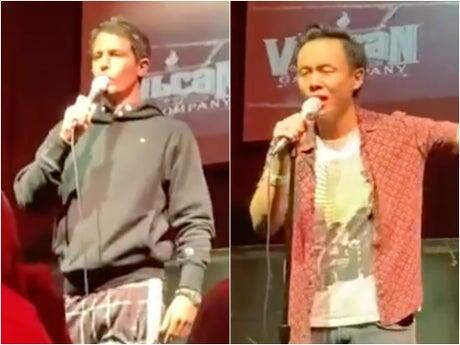 Comedian Tony Hinchcliffe has reportedly been dropped by his agents after footage of him using racist slurs on stage went viral.

US-based insult comic Hinchcliffe, who has previously opened for Joe Rogan, was performing at Big Laugh Comedy in Austin last week at a show compered by Chinese comedian Peng Dang.

Dang had ended his own set by talking about stopping hate against Asian people, introducing Hinchcliffe by telling the crowd to “give it up for the one and only Tony Hinchcliffe”.

However, Hinchcliffe began his set by calling Dang a racial slur, which prompted laughter from some members of the audience.

He then called the crowd “f***ing race traitors” for laughing at Dang’s jokes, before mocking Dang’s accent.

Dang shared the clip on Twitter on Tuesday (11 May), writing: “Last week in Austin, I got to bring up Tony Hinchcliffe. This is what he said. Happy Asian (AAPI) Heritage Month!” The tweet has been liked more than 10,000 times and retweeted by 3,600 accounts.

TMZ has now reported that Hinchcliffe has been dropped from talent agents WME.

Speaking to the publication, Dang said: “I’ve been in this country for almost 11 years, I’ve lived in Alabama, Georgia, Texas, and I had never heard anybody call me that C-word.”

Dang said that the laughter had come from a “small portion” of the audience and that many members – in particular the women – had been visibly uncomfortable at Hinchcliffe’s comments.

He also said that Hinchcliffe had made more “Chinese jokes” in his set, saying: “As a comedian myself I can respect his profession… what I have a problem with was when he used the C-word, the Asian racial slur.”

Hinchcliffe is yet to publicly comment on the clip. The Independent has contacted his legal representatives for comment.

Twitter praised the player for what he said.
5 HOURS AGO
Herbie J Pilato

He was a teen movie idol sensation, a major TV star for decades, and the son of legendary actress Helen Hayes. His name was James MacArthur, and he died too young. As documented by The Associated Press and FoxNews.com, MacArthur enjoyed a career that spanned over forty years. He was best known for his role as Detective Danny "Danno" Williams on the original version of the television crime drama, Hawaii Five-0, which aired on CBS from 1968 to 1980. Episodes often concluded with detective Steve McGarrett, the lead character (as played by Jack Lord), speaking what became the famed pop-culture catchphrase: "Book 'em, Danno."
1 DAY AGO
The Independent

Eva Green has told the High Court she has “nothing against peasants” after she was said to have described the potential crew of a failed sci-fi-film as “shitty peasants”.The Casino Royale star, 42, was due to play the lead role in A Patriot, but the production collapsed in October 2019.She is suing production company White Lantern Film, claiming she is entitled to her one-million-dollar (£810,000) fee for the abandoned project despite its cancellation.In turn, White Lantern is bringing a counterclaim against the French actress, alleging that she undermined the independent film’s production, made “excessive creative and financial demands” and had...
NEW MEXICO STATE・35 MINUTES AGO
The Independent

Rachael Bland’s widower Steve: There can be happiness after cancer

Nearly five years after his late wife Rachael Bland started the award-winning podcast You, Me and the Big C following her breast cancer diagnosis, Steve Bland has recorded one of its final episodes, saying it is possible to “be happy again and full of life again”.BBC presenter Rachael died from the disease in September 2018 at the age of 40, and her co-host Dame Deborah James – known by her social media handle Bowelbabe – died from bowel cancer in June last year, also aged 40.The show’s third presenter, Lauren Mahon, was recently given the five-year all-clear from breast cancer,...
1 HOUR AGO
The Independent

Rita Ora confirms she and Taika Waititi are married

Rita Ora has confirmed that she is married to Taika Waititi, seemingly after months of keeping their nuptials under wraps.The star, 32, revealed the news while promoting her new single “You Only Love Me” last Friday.“I am officially off the market, people. I chose to keep it more private and keep it to myself more but with my new video I am playing on what could have been,” Ora explained.While she did not share where or when the wedding took place, she did reveal that it “was perfect” and “exactly, exactly how I wanted”.Sign up for our newsletters. Read More Adam Scott says Boys Meet World co-star shunned his hug on setMoment coastguards recover huge whale carcass floating in seaBurglary suspect sits down to smoke cigarette before breaking into student halls
1 HOUR AGO
The Independent

Zach Braff opened up about going to therapy and revealed why it “changed” his life in a new interview.The actor explained how therapy has helped him through difficult times during an interview with Page Six while at a screening for the new Apple TV+ series, Shrinking. The program follows a therapist who is struggling with his own grief and breaks the rules of his job by telling his clients his honest thoughts.“I’ve been in therapy on and off my whole life,” he said. “It’s definitely changed my life and helped me through some really tough times when I’ve had...
1 HOUR AGO
The Independent

Voices: Yes, these police videos are awful to watch but we must not look away

The video showing George Floyd being choked to death by police in Minneapolis in 2020 lasts an excruciating nine-and-a-half minutes.The cell phone footage captured by a passer-by of Eric Garner being wrestled to the ground in Staten Island in 2014, placed in an illegal chokehold and heard to gasp  “I can’t breathe” eleven times before he loses consciousness, is of a similar length.Despite their different geographic location, and the angles at which the incidents were filmed, both pieces of footage revealed the same truth - that an unarmed Black man was being killed by the police, even as he...
2 DAYS AGO
The Independent

Kim Kardashian has hit back at paparazzi after she was asked about an alleged battery incident involving Kanye West in front of her children.On Friday (28 January), the 42-year-old reality star was seen leaving her daughter North West’s basketball game alongside the nine-year-old and her seven-year-old son, Saint West. As Kardashian was seen walking her children to their car, a paparazzo was heard asking the mother of four about an alleged incident in which Kanye West was accused of grabbing and throwing a woman’s phone.“Hey Kim, what do you think of Kanye hitting someone…. The paparazzi’s phone?” the cameraman...
2 HOURS AGO
The Independent

Britney Spears has opened up about why she recently deleted her Instagram account.On Thursday (26 January), the 41-year-old singer wrote on Twitter that some fans allegedly sent the police to her house to perform a wellness check on her after she deleted her Instagram account.“As everyone knows the police were called to my home based on some prank phone calls,” Spears wrote. “I love and adore my fans but this time things went a little too far and my privacy was invaded.“The police never entered my home and when they came to my gate they quickly realised there was...
1 DAY AGO
The Independent

Molly-Mae Hague has shared a post on Instagram amid rumours she has given birth to a baby girl.The former Love Island stars Tommy Fury and Molly-Mae, both 23, announced that they were expecting their first child together in September. The couple shared the news on Instagram with a black-and-white video, which Hague captioned: “I can’t wait for the adventures that we haven’t even dreamed of yet.”Earlier this month, Hague also shared a third-trimester pregnancy update with her fans and followers on YouTube, where she showed off her pregnant stomach and hinted that she was nearing her due date.After a...
1 DAY AGO
The Independent

Abigail Breslin officially tied the knot with longterm boyfriend Ira Kuyansky over the weekend.The actor took to Instagram on Monday to share a picture of her and Kuyansky at their wedding reception. In the caption, she wrote: “01.28.23…married my bestest friend.”For the occasion, Breslin wore a white, off-the-shoulder dress with long tulle sleeves and a veil. She had her hair down in loose curls, while the groom opted for a black tuxedo.The Little Miss Sunshine star also shared a photo of her engagement and wedding rings in an Instagram post, with a caption that read: “ya girl got married...
2 HOURS AGO
The Independent

Palace aides are reportedly in talks with the BBC about King Charles III giving a tell-all interview to the broadcaster.The news comes as other reports claim that King Charles might be willing to make concessions with the Duke of Sussex to convince him to attend the coronation. It’s being alleged that palace aides are discussing the possibility of the monarch using an interview to share his side of the story, following Prince Harry’s revealing Netflix documentary with his wife Meghan, his memoir Spare and his series of interviews given to different broadcasting outlets earlier this month.In a string of...
1 DAY AGO
The Independent

Amy Robach and TJ Holmes are leaving ABC amid reports they are involved in a romantic relationship.In a statement The Independent, an ABC News spokesperson revealed that Holmes and Robach are officially leaving GMA3: What You Need to Know. The departure comes after the Daily Mail first shared photos of the pair in November, sparking speculation about their alleged romance.“After several productive conversations with Amy Robach and TJ Holmes about different options, we all agreed it’s best for everyone that they move on from ABC News,” the spokesperson said. “We recognize their talent and commitment over the years and...
2 HOURS AGO
The Independent

In 67 minutes of video, brutality followed by nonchalance

If you stumbled on the scene too late, you might have missed him there, bloodied and beaten. The officers’ demeanors seem untroubled and their work nonurgent as they mill at this quiet corner trading battle tales, a fist bump and a back pat. The police ranks have ballooned, but everyone seems to agree there’s nothing to see here. They tie their boots and fret over their glasses and carp about knee pain, so you might have missed him there among the phalanx that towers above, the ones who wear a smile and spurt laughter and will go home safe.Look past...
MEMPHIS, TN・1 DAY AGO
The Independent

Taylor Swift cast transgender model Laith Ashley as her love interest in her newest music video and fans are loving it.The 33-year-old singer released the music video to her song, “Lavender Haze,” which is from her album Midnights, on Thursday night. Along with its purple-coloured pool, flowers, and clouds, the video also featured scenes of Swift with Ashley. The video features the pair cuddling alongside a group of friends and dancing at a house party, filled with lavender mist.Ashley took to Instagram on Friday to express his gratitude for the “Anti-Hero” singer featuring him in the music video.“Thank you...
2 DAYS AGO