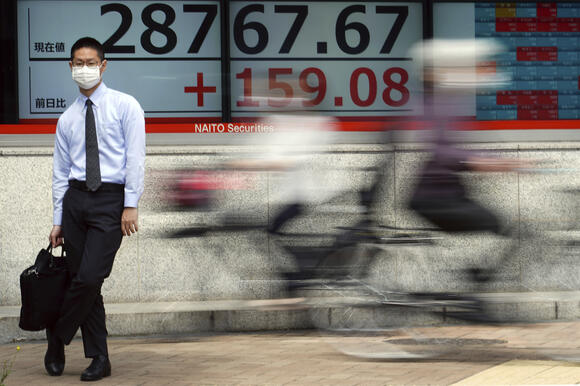 Stocks are opening lower on Wall Street and bond yields are rising as investors reacted to a bigger-than-expected increase in inflation last month. Tech giants like Apple and Microsoft were leading the way lower in the early going on Wednesday. The S&P 500 fell 0.5% and the tech-heavy Nasdaq lost 0.9%. That came after the government reported that consumer prices surged 0.8% last month, while the year-over-year rise was the fastest since 2008. Investors have been worrying that inflation could return after being absent for many years as the economy revs out of the recession brought on by the pandemic.

THIS IS A BREAKING NEWS UPDATE. AP’s earlier story follows below.

BEIJING (AP) — Global stock prices were mostly higher Wednesday as investors looked ahead to U.S. data they worry will show inflation is picking up.

Wall Street futures sank after the benchmark S&P 500 index on Tuesday lost 0.9% amid concern inflation might accelerate, hampering an economic recovery and dragging on share prices.

More U.S. inflation data were due out Wednesday. Investor concern is increasing after prices rose for industrial materials including copper and crude oil.

“The source of the market’s angst is inflation, and whether it is transitory or here to stay,” Jeffrey Halley of Oanda said in a report.

On Wall Street, futures for the S&P 500 and the Dow Jones Industrial Average were up 0.4%.

Big tech companies were among the biggest decliners Tuesday for a second day. Tech stocks get most of their valuation from future profits. Those might be less valuable if they are eroded by inflation.

Investors have worried about inflation since bond yields spiked earlier this year, though yields have mostly stabilized since then. The yield on the 10-year Treasury held edged up to 1.62% Wednesday from 1.61% on Tuesday.

The Federal Reserve has said the U.S. economy will be allowed to “run hot” to ensure a recovery is established. Despite that, investors worry central banks might feel pressure to pull back stimulus and raise near-zero interest rates.

In energy markets, benchmark U.S. crude gained 31 cents to $65.59 per barrel in electronic trading on the New York Mercantile Exchange. The contract rose 36 cents on Tuesday to $65.28. Brent crude, used to price international oils, added 30 cents to $68.85 per barrel in London. It rose 23 cents the previous session to $68.55.

Did markets overreact to the Fed, and how to trade the BOE meeting

Will stocks continue their decline and how to decide if the Fed is serious about rising inflation risks. Financial markets had an abrupt re-set last week after the US Federal Reserve dramatically recalibrated their interest rate expectations and pushed up both growth and inflation expectations. The result was a selloff in global stock markets, with US stocks experiencing their worst week for nearly four months, and the dollar having its best weekly performance since September. The bond market fallout was sharp and shocking, the steepening trade in Treasury yields, when long term yields are higher than short term yields, which has been a market favourite since news about the Covid vaccine in November last year, was dramatically unwound. Longer term yields fell sharply at the end of last week, with the 10-year yield dropping from 1.57% before the meeting to 1.45% at the end of last week. In contrast, shorter term yields surged as investors rushed to price in the prospect of interest rate hikes from the Fed sooner than had previously been expected. The fate of the US yield curve is on everyone’s mind as we start a new week: will the unwinding of the reflation trade continue, or is it a transient phenomenon? Also, will other central banks like the Bank of England who meets this week, follow in the Fed’s footsteps?

Oil prices moved higher on Friday, recouping some of the losses they had suffered in the prior session. The West Texas Intermediate (WTI) for July delivery added 60 cents, or 0.8 percent, to settle at 71.64 U.S. dollars a barrel on the New York Mercantile Exchange. Brent crude for August delivery increased 43 cents, or 0.6 percent, to close at 73.51 dollars a barrel on the London ICE Futures Exchange.

NEW YORK -- The S&P 500 ended Thursday barely changed after stocks sloshed around in mixed trading, as investors make preparations for a future where the Federal Reserve is no longer doing everything it can to keep interest rates super low. Markets around the world were mixed but mostly calm...

US stocks lower after Fed official sees rate hikes in 2022

Stocks were broadly lower Friday after a Federal Reserve official said that the nation’s central bank might need to raise interest rates as early as next year, sooner than the Fed’s latest estimate of possible rate increases in 2023. The S&P 500 index fell 0.9% as of 11:51 a.m. Eastern....

A week that centered on the Federal Reserve's direction and the future of interest rates finished in a fitting way, with stocks retreating Friday in response to hawkish commentary from one of the Fed's members. While the Fed's latest policy announcement signaled the likelihood of interest-rate hikes starting in 2023,...

(RTTNews) - The China stock market on Thursday ended the three-day losing streak in which it had given up more than 90 points or 2.4 percent. The Shanghai Composite Index now sits just above the 3,525-point plateau and it may tick higher again on Friday. The global forecast for the...

U.S. stocks opened lower Friday, set to end the week on a negative note as investors continue to digest a change in tone by the Federal Reserve. The Dow Jones Industrial Average was down 402 points, or 1.2%, at 33,420. The S&P 500 shed around 39 points, or 0.9%, to trade at 4,183. The Nasdaq Composite dropped around 78 points, or 0.6%, to trade at 14,083. A Fed meeting saw policy makers on Wednesday pencil in two rate hikes by the end of 2023, while raising their inflation forecast and discussing the eventual tapering of monthly asset purchases. Losses for stock-index futures deepened ahead of the opening bell Friday after St. Louis Fed President James Bullard, who isn't a voting member this year of the Fed's policy making Federal Open Market Committee, said it was “natural” for the Fed to tilt hawkish at the meeting given recent strong inflation readings.

(RTTNews) - The Japanese stock market is modestly higher in choppy trading on Friday, after the losses in the previous two sessions, with the benchmark Nikkei 225 just above the 29,100 level, following the mixed cues overnight from Wall Street. Traders are optimistic after the Japanese government decided to lift the COVID-19 state of emergency in most prefectures on Sunday after a steady decline in COVID-19 infections was seen. Traders also await the Bank of Japan's interest rate decision later in the day.

(RTTNews) - Asian stock markets are trading mixed on Friday, following the mixed cues overnight from Wall Street, with support from technology stocks which mirroring their peers on the tech-heavy Nasdaq. The markets were also dragged after crude oil and bullion prices tumbled on the US dollar's surge. The markets also remain tense amid the continuing high number of infections in most markets. Asian markets ended mostly lower on Thursday.

The Dow capped the worst week since October with more losses Friday as markets continued to digest the latest pivot in Federal Reserve messaging towards more restrictive monetary policy. After European bourses fell nearly two percent, the Dow dropped more than 500 points, or 1.6 percent on weakness in energy...

Stocks open lower, pushing the S&P 500 toward a weekly loss

Stocks are opening broadly lower on Wall Street, putting the S&P 500 index on track for its first losing week in the last four. The benchmark index gave up 0.8% in the early going Friday, with banks and technology companies leading the way lower. Investors are still trying to assess how soon the Federal Reserve will start to raise interest rates from their ultra-low levels and scale back its bond purchases. The head of the St. Louis branch of the Federal Reserve, James Bullard, told CNBC early Friday that the first interest rate increase could come as soon as next year.

US Equity Futures are looking for direction before the last trading day of the week. Get Granthshala Business on the go by clicking here. The S&P 500 slipped less than 0.1%, falling for a third straight losing session. Most stocks in the index and Wall Street were lower, but gains...

The US stock market showed multidirectional dynamics on Thursday. The Nasdaq technology index undoubtedly became the growth leader, jumping by 0.87% and making a new historic high. But the Dow Jones fell by 0.62%, setting a monthly low. Few people know that the US Federal Reserve raised the IOER (Interest Rate on Excess Reserves) on Wednesday to prevent negative yields in the debt market. The IOER rate hike causes a sharp rise in treasuries and the dollar index, but this effect, according to experts, will not last more than 1-2 weeks, after which everything will return to normal.

(Bloomberg) — Stocks fell for a fourth day, extending a bout of volatility ignited abruptly hawkishness on the Federal Reserve that could be exacerbated Friday by the mass expiration of inventory choices. Commodities such as copper slumped whereas the greenback touched a two-month excessive. The Dow Jones Industrial Average was...

European and US stock markets fell on Friday as investors dwelled on the prospect of rising US interest rates, while London was dented also by weak UK data. Europe’s main bourses were all down more than one per cent in afternoon trading as Wall Street opened. The Dow sank 1.2...