‘Like a contest entry from a toddler’: David Hockney design for London Underground savaged by public 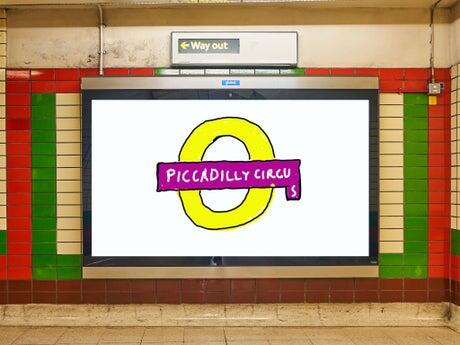 New artwork created by artist David Hockney for the London Underground has drawn the ire of the general public.

The design was unveiled by London Mayor Sadiq Khan , and features a modified version of the London Underground logo, designed to deliberately appear as if it were crudely drawn using Microsoft Paint.

Khan described the artwork as “brilliant” in a social media post, though many members of the public were quick to disagree.

The piece was commissioned as part of Let’s Do London, a series of major art projects taking place across the UK capital.

It has been confirmed that Hockney did the tube activity completely for free. The design was oriented around a similar theme to his recent Royal Academy exhibition, which the artist has claimed is about hope, Spring and renewal.

As seen in the pictures, the A Bigger Splash artist’s design comprises a digital recreation of the London Underground’s signage for Piccadilly Circus, with the letter “s” added at a tangent, as if the artist hadn’t accounted for how much room the word would take up.

People made their feelings known about the design in the replies underneath, with several sharing their own mock-ups of even cruder designs.

“It looks like the work of a six-year-old who ran out of space due to poor preparation,” wrote one Twitter user. “It looks very unprofessional.”

“That thing in the tube station is indisputably a terrible Microsoft Paint composition,” wrote another. “Even if we accept it’s meant to be ironic, it’s still awful to look at.”

One person described it as looking “like a contest entry from a toddler”, while yet another amusedly accused Hockney of “trolling the world”.

“Hideous, puerile work, awful colours in its setting of red and green tiles,” wrote someone else.

Others, however, thought the design was a successful piece of humorous art, with one person even describing it as “beautiful”.

How many times have you taken your walk home, looked up and noticed a rooftop bar, Georgian building or neon sign for the first time? Right under your nose, or rather, above it. Looking up is something of a conscious effort and Tracey Emin’s latest work ‘A Moment Without You’ gives you even more reason to tilt your head 30 degrees. The piece can be found on the public art walk The Line and depicts five bronze birds sitting atop metal plinths in CCTV-like fashion.

Sadiq Khan has today said that masks should be worn on the London Underground even after the rules change on Monday (July 19). Bucks has three stations on the Tube - in Amersham, Chesham and Chalfont St. Giles, meaning the rules will affect those travelling from and to Buckinghamshire. In...

With everyone stuck indoors and with many without gardens or outdoor space, parks were a vital part of staying sane and fit during the dark months of the pandemic. Sophia went around to the green spaces we've all grown to appreciate, including Hackney Marshes, Shoreditch Park, Hackney Downs, Hyde Park. She shot images of individuals, families, and or friends within the space. She captured "moments of serenity and community in London's green spaces during the chaos of a global pandemic".

Secrets of the London Underground: How US inventor created the Tube's first escalator as a SPIRAL in 1906 but passengers never got to use it - and the Elgin Marbles were protected from the Blitz in now-closed station

Today, as the bulk of coronavirus restrictions were lifted in England, thousands of Londoners used the Underground network to get to work. Holloway Road station, in North London, is one stop which will have been thronged with commuters using the escalators this morning. But their commutes could have been entirely...

David Ross, £642m man, on owning an ‘Ed Stone’ and why he bought that Hockney painting

Before I interview David Ross, I am asked by his publicist not to mention the door. It’s big and black and has the number 10 on it. The art collector, philanthropist and chair of the National Portrait Gallery, who is said to have donated more than £700,000 to the Conservative Party, clearly has a sense of humour but, judging by the anxiety regarding the entrance to his office in St James’s, is a little sensitive, too.

Since the turn of the century, public art projects have been all about scale, from Antony Gormley’s giant Angel of the North to Anish Kapoor’s vast, trumpet-like Dismemberment, which dominates rolling farm slopes in New Zealand. Scale in a different sense was important to Steve McQueen’s Year 3 Project, in which every pupil in that age group in London was invited to sit for a class photograph in 2018. And it is key to Oscar Murillo’s Frequencies, which opened this week at his old secondary school in Hackney, bringing together more than 40,000 canvases created by 100,000 children from 350 schools in 34 countries around the world. You won’t, it’s fair to say, have time to look at them all.

Pritzker Architecture Prize-winner Toyo Ito has created a public toilet within three mushroom-shaped blocks as his contribution to the Tokyo Toilet project. Ito's distinctive toilet was built to replace a previous toilet block at the bottom of a flight of steps leading up to the Yoyogi Hachimangu shrine in the Shibuya district of Tokyo.

We have all heard the phrase 'when in Rome.." but what if you could get a taste of Rome right here in the UK?. The good people of TikTok have been raving about a hidden underground paradise filled with Roman inspired baths - and lets just say we're already mentally planning our trip.

A large-scale public art commission in the central area of London’s West End has launched for the summer. Artists associated with the Royal Academy of Arts have designed flags, painted pedestrian crossings and filmed pieces for the giant screen at Piccadilly Circus. The takeover marks the beginning of a season of free, accessible public art in the area. Art of London, a new cultural initiative for the West End and the Royal Academy collaborated to create one of the biggest public art takeovers the capital has ever seen.

Art gallery attendants are usually occupied by ensuring that a respectful silence is maintained and that no one strays too close to priceless masterpieces. But from Saturday, staff at the Tate Modern’s new exhibition inviting visitors to sketch on the gallery’s floor will be tasked with monitoring the drawings in case some who take part are tempted to daub the kind of rude graffiti normally seen on the back of lavatory doors.

Sign up to myFT Daily Digest to be the first to know about Collecting news. Returning to the Hollywood Roosevelt hotel for its third consecutive year, LA’s quirky, convivial Felix Art Fair, which originated on the fringes of Frieze, is poised to be the Los Angeles art world’s largest public gathering since the pandemic shutdowns. The organisers say their aim is for the event to invigorate the social reawakening of the local art scene.

Born in Kent, Zandra Rhodes, 80, graduated from the Royal College of Art in 1964. In 1969, she produced her first solo fashion collection, and went on to dress Diana, Princess of Wales, Freddie Mercury and Marc Bolan. In 2003, she founded the Fashion and Textile Museum in London. She has designed a tote bag for the Recycle Your Electricals campaign, and lives in London.

The mayor of London, Sadiq Khan says face coverings must be worn by all commuters on London’s transport networks even as restrictions are eased on July 19. The mayor said the decision to maintain this measure was to protect tube, tram and other transport users from catching the COVID-19 virus which is still spreading fast.

An entire London Underground line has been suspended after staff were told to self-isolate by the NHS Covid-19 app leaving no-one to run the train service. The Metropolitan Line is down today (Saturday, 17th July) after control room staff were alerted by the app in this morning. The 'ping' to...

The spotlight will fall on the Northern Gallery for Contemporary Art, housed within National Glass Centre, as it plays host to Field for the British Isles by Sir Antony Gormley, who also created the world-famous Angel of the North. On show from July 24, the Turner Prize-winning artwork comprises of...

The future of art? World-famous artists delve into NFTs

With NFTs, the future of art is in the palm of your hand. Here is a look at the topmost famous artists getting into NFTs right now. For millennia, the world of art has remained unchanged for the most part. The tradition has always revolved around artists selling their work to museums, galleries, or individual collectors. In return, the artist would get a market value for their work which was often kept in private vaults and only displayed to the public ever so often.

'Lion With Leopard's Face' Photographed By Woman On Safari

The image was captured during a trip to South Africa.

They were built to lure in tourists from all corners of the globe - and these haunting, crumbling attractions do... albeit for the wrong reasons. This week, a luxurious Marbella hotel used by wealthy travellers and football stars was pictured abandoned and rotting due to a loss of business from Covid.