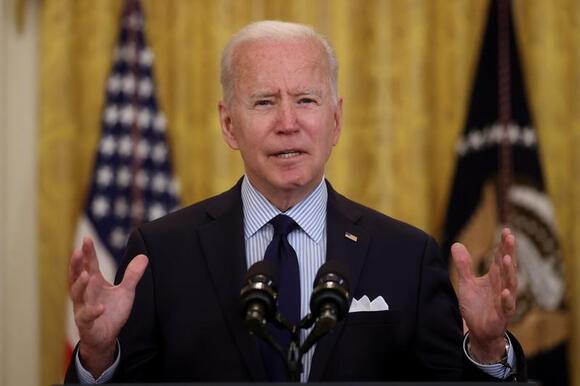 WASHINGTON (Reuters) - President Joe Biden will hold his first White House meeting with top Republican leaders from Congress on Wednesday in an effort to find common ground on his proposals to spend trillions of dollars on U.S. infrastructure, education and childcare.

Biden, a Democrat and former longtime U.S. senator from Delaware, has sought to reduce partisan tension in Washington and pledged to work with both parties to advance his policy goals, which face stiff opposition from Republicans.

Just before the White House meeting, McCarthy will preside over an effort to oust Representative Liz Cheney from the House Republican leadership team because of her refusal to back former President Donald Trump’s false claim that he won the 2020 election, not Biden.

McCarthy was among the 147 Republicans in Congress who voted in January to try to block the certification of Biden’s election win, hours after a deadly assault on the U.S. Capitol by Trump supporters.

Congressional Democrats are giving Biden plenty of room to try to broker a deal, but they are preparing for the possibility of moving a massive spending bill along strictly party lines toward the end of the summer if Republicans do not show signs of serious negotiations, according to multiple interviews with congressional and White House sources.

“We’re not going to wait a long time if we don’t see that agreement is possible, and I think the president will determine that, and we’ll determine it as well,” House Majority Leader Steny Hoyer told reporters on Tuesday.

Not a single Republican voted for Biden’s $1.9 trillion COVID-19 relief plan that passed in March.

Congressional Democrats may still struggle to retain the necessary support of enough of their own members to pass Biden’s spending proposals through both chambers, where they have slim majorities. They are betting the sheer volume of the spending measures will include enough attractive items to overcome any internal opposition, the sources told Reuters.

Biden’s $2.25 trillion infrastructure bill and a $1.8 trillion education and childcare plan have met with sharp resistance from Republicans in Congress, with disagreements over the price tag, scope and funding proposals. The ideas, and Biden’s intention to tax wealthy Americans and companies to cover the cost, are popular with voters from both parties.

‘HOW WE CAN WORK TOGETHER’

McConnell has vowed not to support Biden’s infrastructure and jobs plan.

“I’m going to fight them every step of the way, because I think this is the wrong prescription for America,” McConnell said in an event in his home state of Kentucky last month.

White House spokeswoman Jen Psaki said on Tuesday that Biden hoped to find common ground with Republicans on his legislative goals and would not try to solve the party’s identity battle.

“Here’s what I can assure you: The focus of this meeting is not on the future of the Republican Party,” she said.

Democratic House Speaker Nancy Pelosi and Senate Majority Leader Chuck Schumer will join their Republican counterparts in the meeting with the president.

The White House said Biden hoped to focus on areas where the two sides could work together rather than on areas of disagreement.

“He’s invited bipartisan leaders to come to the White House to have a discussion about where we can find common ground and how we can work together,” Psaki said.

It was bipartisan. It was aimed at racial healing and national unity. And it just might be a building block for bigger legislative items. Was President Joe Biden's signing of a law making Juneteenth, a day commemorating the end of slavery in America, the harbinger of things to come?. The...

Donald Trump has formally endorsed Lisa Murkowski's top primary challenger in the 2022 Alaska Senate race. In a statement released Friday, the former president said Kelly Tshibaka has his "Complete and Total Endorsement" and that he looked forward to campaigning on her behalf. "Lisa Murkowski is bad for Alaska," the...

Republicans Point to Inflation in Bid to Retake Congress

WASHINGTON (AP) — Gas prices have whizzed past $3 per gallon in much of the nation. The cost of used cars and new furniture, airline tickets, department store blouses, ground beef and a Chipotle burrito are on the rise, too. Many economists say the price increases are fueled by the...

Senate Republicans, led by Minority Leader Mitch McConnell vowed Thursday to shoot down an altered version of the massive For the People Act election reform measure that is set to hit the Senate floor next week. Democrats are attempting to cobble together a version of the bill, also known as...

(Reuters) - A divided conference of U.S. Roman Catholic bishops announced on Friday that they had voted to draft a statement on Holy Communion that may admonish Catholic politicians, including President Joe Biden, for supporting abortion rights. The 168-55 decision to draft a teaching document on the Eucharist, a holy sacrament in the Roman Catholic faith, came after two hours of debate at the virtual assembly of the United States Catholic Bishops' Conference on Thursday, in which the bishops weighed the merits of reaffirming church teachings against the possibility of sowing partisan division.

Senate Republicans made clear on Thursday they oppose all Democratic ideas aiming to overhaul the nation’s voting systems ― even those proposed by moderate Sen. Joe Manchin (D-W.Va.). Their hard-line stance against any federal voting legislation underscores that there is very little chance for a bipartisan outcome on the matter,...

The For the People Act, the Democrats' very popular voting rights bill, is dead in the water in the Senate. The Democratic caucus' most conservative member, Joe Manchin of West Virginia, has made it clear that he won't support any elections overhaul that isn't bipartisan. After weeks of silence, Manchin has begun circulating a compromise proposal to his fellow senators.

Walter Shaub, the director of the United States Office of Government Ethics under President Obama, said the Biden administration is sending a "f--- you" to ethics experts by hiring so many relatives of senior White House officials. Press secretary Jen Psaki, Secretary of State Antony Blinken, national security adviser Jake...

WASHINGTON — Progressives want to get to work on a massive $6 trillion economic package. Moderate Democrats say that's too pricey. From price tag to policy details, Democratic leaders are confronting early internal divisions over how to write a budget measure that can bypass a Republican filibuster in the Senate. They would need to unify their wafer-thin majorities in both the House and the Senate.

Analysis: Trump was wrong about the law, Obamacare politics and his judges

WASHINGTON — Former President Donald Trump promised to repeal Obamacare, the health insurance program that helped fuel the backlash tea party movement and ultimately his own candidacy. If Trump couldn't get Congress to do away with the law — and he couldn't, even with Republicans in control of both chambers...

WASHINGTON (Reuters) -U.S. Senate Democrats scrambled to unite around a sweeping election reform bill they hope to begin debating next week, in the face of Republican opposition and moves by several states to pass laws placing new restrictions on voting. Several Democrats expressed optimism over a compromise plan proposed by...

Bipartisanship is a two-way street.

Senate Majority Leader Chuck Schumer. D-N.Y., filed cloture on President Biden's nomination of Kiran Ahuja to be the director of the Office of Personnel Management, a procedural step that will likely set up a confirmation vote next week for the nominee Republicans accuse of espousing critical race theory. Sen. Josh...

In North Korea a packet of coffee costs $100, and that's a problem for Kim Jong Un

Hong Kong (CNN) — North Korean leader Kim Jong Un has bigger problems than the United States right now. He needs to feed his people, and his options are not good. The ruler of the secretive, hereditary communist dictatorship opened an important political meeting on Tuesday acknowledging the grim situation his country now faces. North Korea's food supply is strained and "getting tense," Kim said, according to the country's state-run newswire, KCNA.

Two dozen GOP lawmakers have written a letter to President Joe Biden urging him to replace Vice President Kamala Harris in her role of leading attempts to control illegal immigration at the southern border. The letter states that the Republicans members of the House of Representatives have "serious concerns" about...

The fact that Senate Minority Leader Mitch McConnell is more upset with whoever leaked tax information revealing that many billionaires don’t pay taxes, calling for “actual consequences” for the culprit, than he is with the fact that many billionaires don’t pay taxes tells us everything we need to know about his priorities. McConnell, who subverted the attempt to form a bipartisan commission to investigate the Jan. 6 Capitol insurrection, claims prosecuting the perpetrator is a “matter of justice and “a practical deterrent.”