France should suspend all immigration from outside EU for up to five years, Michel Barnier says 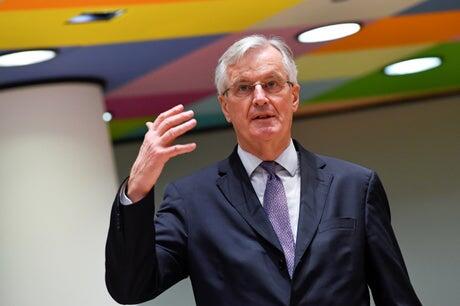 France should suspend all immigration from outside the EU for up to five years and push the bloc to toughen its external borders, Michel Barnier has said.

The EU’s former chief Brexit negotiator, who is thought to be considering a tilt at the French presidency, said the European Union’s external frontier had become a “sieve”.

“I think we have to take the time for three or five years to suspend immigration,” he told public broadcaster France 2.

Mr Barnier said any suspension should exclude students and refugees, “who we need to treat with humanity and care”.

He called for a discussion with other EU member states about making the bloc’s external border “more rigorous”.

And the French politician claimed there were “links” between immigration and “terrorist networks that infiltrate migrational flows”.

Asked whether his comments would call into question his reputation as a moderate Gaullist, Mr Barnier said: “The problems of immigration are not moderate. I know, as the politician that I am, to see the problems how they are and how French people experience them and to find solutions.”

Mr Barnier is understood to have his eye on becoming the candidate for centre-right party The Republicans.

However, most polls currently suggest that the 2022 contest will be a two-horse race between the incumbent, Emmanuel Macron, and the far-right Marine Le Pen.

Immigration from outside the EU is a national competence for member states, and a suspension would be within the gift of the French government, although toughening the EU’s external Schengen border would require the cooperation of other EU member states.

The proposals put forward by Mr Barnier would not affect free movement with other EU countries.

Immunized but banned: EU says not all COVID vaccines equal

LONDON — (AP) — After Dr. Ifeanyi Nsofor and his wife received two doses of AstraZeneca's coronavirus vaccine in Nigeria, they assumed they would be free to travel this summer to a European destination of their choice. They were wrong. The couple — and millions of other people vaccinated through...

PARIS – The European Union on Monday agreed to adopt a sanctions regime for Lebanese leaders by the end of July, France said, in an effort to force a stable government to emerge from nearly a year of political chaos following the Beirut blast. “There was a moment ago a...

BRUSSELS, July 12 (Reuters) - The European Union’s foreign policy chief Josep Borrell said on Monday that the bloc should be ready to use sanctions on Ethiopia as a way to push for peace and humanitarian access in the northern region of Tigray. “The option of restrictive measures must be...

The Court of Justice of the European Union upheld on Thursday a lower tribunal's ruling which had said that Russia's access to the OPAL gas pipeline should be limited. The court case is a win for Poland against an appeal of the lower court's ruling filed by Germany. The OPAL...

Italy reaches deal with EU for launch of Alitalia’s successor

ROME (Reuters) – Italy has reached a deal with the European Commission over the launch of carrier Italia Trasporto Aereo (ITA), which will replace the loss-making, state-owned Alitalia, the Treasury said in a statement. It said the new company would be fully operational from Oct. 15, adding that the “constructive...

A group of 160 French Olim (new immigrants) to Israel arrived at Ben Gurion Airport on Wednesday aboard a special Aliyah (immigration to Israel) flight from Paris organized by The Jewish Agency for Israel and the Ministry of Aliyah and Integration. The Olim were accompanied on the flight by Israeli...

France shouldn’t be on ‘amber plus’ list, says analyst

After a special quarantine category, “amber plus,” was created for France, a leading analyst has said the stated reasons are simply wrong.Late on Friday 16 July, the government said anyone returning from France must quarantine, even if they have been double-vaccinated by the NHS. It set France apart from all other “amber list” countries, from which returning travellers who have been vaccinated by the NHS need not quarantine. The reason given by the Department of Health and Social Care (DHSC) was the “persistent presence of cases in France of the Beta variant”. This was first identified in South...

If Britain wants to resolve the Northern Ireland protocol, this is not the way to do it | Anand Menon and Jill Rutter

Threatening to tear up the deal will destroy vital trust, say Anand Menon and Jill Rutter of UK in a Changing Europe

BRUSSELS (Reuters) – France, Spain, Italy and 20 other EU countries may be taken to court for their tardiness in enacting landmark EU copyright rules into national law, the European Commission said on Monday as it asked the group to explain the delays. The copyright rules, adopted two years ago,...

EU calls on all Tunisian actors to respect constitution, rule of law

BRUSSELS (Reuters) – The European Union urged all political actors in Tunisia on Monday to respect the country’s constitution and avoid violence after Tunisia’s president ousted the government and froze parliament with help from the army. “We are closely following the latest developments in Tunisia,” a spokeswoman for the European...

BRUSSELS (Reuters) – The European Commission on Monday approved Italy’s 800 million euro state aid scheme to compensate airports and ground-handling operators following the impact of the COVID-19 pandemic on travel. The compensation, in the form of direct grants, covers the period of March 1 to July 14, 2020. “Airports...

Could the European Union kick out Hungary?

Relations between Hungarian prime minister Viktor Orban and other European leaders seem to have reached a nadir. For years, Orban has pursued a right-wing agenda that has often contradicted the bloc’s core values. His latest move has been to introduce what he has framed a “child protection law”, which makes...

Boris Johnson has rejected Brussels’ latest attempt to iron out problems with the post-Brexit arrangements for Northern Ireland, insisting that the withdrawal agreement signed last year must be renegotiated. A series of proposals published by the European Commission on Monday with the aim of easing implementation of the Northern Ireland...

European Union chief Ursula von der Leyen said Tuesday that 70 percent of adults in the bloc have received at least one dose of a COVID-19 vaccine. Overall, 57 percent of over-18s are now fully vaccinated across the 27 nations, she said in a statement. The European Commission president has...

EU: 70% of Adults in Bloc Now Have at Least One COVID Vaccination

European Union leaders said Tuesday that 70% of adult residents have now received at least one dose of the COVID-19 vaccine, hitting the target they set for the end of July. Speaking to reporters in Brussels, European Commission President Ursula Von der Leyen said 57% of all adults in the EU are now fully vaccinated. She said these numbers put Europe among the world leaders.

France has endured three national lockdowns and its president wants to stave off a fourth. To this end, President Emmanuel Macron last week introduced a "health pass" system that will soon require citizens to be vaccinated against COVID-19 in order to frequent cafes, restaurants, shopping centers and more. The announcement...

All arrivals into the UK from France will have to continue to quarantine for 10 days even if they are double-jabbed, the government has announced. The UK ordered all travellers returning to the UK from the country to isolate at home in a sudden update to official travel rules, despite 'Freedom Day' changes kicking in on Monday.