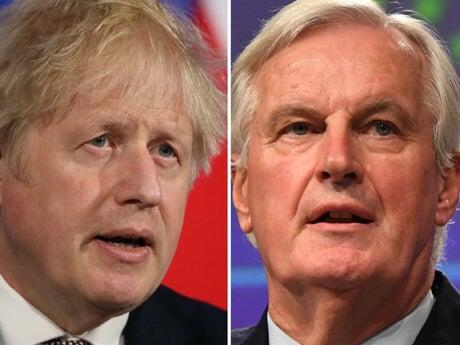 The prime minister ordered Royal Navy vessels to the British dependency last week after a fleet of 60 French vessels tried to blockade Jersey’s main port in protest over restricted licences.

Mr Barnier accused the UK government of failing to respect the Brexit agreement on fishing access – saying the French fisherman were “right” to feel aggrieved.

“I think that the British are behaving like buccaneers and it’s not the first time,” the Brexit trade deal negotiator told French TV.

“I think the French fishermen are right and they must be supported,” Mr Barnier said. “The French authorities, the government and the European Commission must support these fishermen.”

The French politician added: “They have the right to obtain the right to fish in these waters near Jersey and Guernsey.”

French seamen in Normandy have accused the Jersey authorities of failing to issue new, legal licences needed to fish in its waters.

The French government has backed its domestic industry in the dispute, with one of Emmanuel Macron’s ministers threatening to cut off Jersey’s electricity supply.

Maritime minister Annick Girdardin suggested the move during a speech in the French parliament, warning Paris was ready to use “retaliatory measures” outlined in the Brexit trade agreement.

Mr Barnier suggested the threats to the electricity were credible. “We must clearly tell the British it cannot work like this otherwise there will be serious consequences on the deal in general and reprisal measures that are included in the treaty,” he told the France 5 network.

“I think that the people of Jersey should be very careful as well because they depend on the [EU] not just for electricity but for business activity and VAT,” Mr Barnier added. “We have a global deal and they must be careful, that’s the message I want to pass on.”

With the issue unresolved, local fishing industry leaders in Normandy have said any boats from the Channel Islands would be blocked from entering their ports.

Cabinet Office minister Michael Gove said on Monday that UK officials – including the environment secretary and Brexit minister were currently trying to resolve the matter with their French counterparts.

“I know George Eustice and Lord Frost have been having conversations with French and EU counterparts to deescalate the situation,” he said.

Boris Johnson was ready to overhaul the Northern Ireland Protocol this week but was talked down by his Brexit minister Lord Frost, The Telegraph has learnt. With the UK now demanding a renegotiation of the post-Brexit arrangements for Northern Ireland, The Telegraph has been told Mr Johnson is now convinced of the need to use the so-called “nuclear option” if Brussels refuses.

Why would anyone trust Brexit Britain again?

London (CNN Business) — Just seven months after singing its praises, British Prime Minister Boris Johnson is attempting to rewrite the Brexit deal he signed with the European Union. It's a risky move that will undermine Britain's credibility as a trustworthy trading partner at the very moment that the UK...

DUP leader Jeffrey Donaldson today threatened to stop all goods checks in Northern Ireland if Boris Johnson does not hold firm in the protocol row with the EU. Sir Jeffrey warned that his party is 'not going to be in the business' of implementing the divorce terms unless it believes they are right for the province.

Mahatma Gandhi famously said that a society can be judged on how it treats its most vulnerable members, and so it should be for Britain’s post-Brexit settlement scheme for EU citizens who live and work here.Early on in the post-referendum Brexit negotiations, both sides were keen to stress they wanted to protect the rights of each other’s citizens already resident within their jurisdiction. During the referendum campaign itself, Boris Johnson, Michael Gove and Priti Patel issued a joint statement saying EU citizens would “automatically be granted indefinite leave to remain in the UK and will be treated no less favourably...

UK has no idea of EU fishing catch in its waters, says Labour

Labour has accused the government of having no idea how many fish are being caught in UK waters by EU boats. The party has accused ministers of losing control of UK waters and "letting down" fishing fleets. Data on certain species such as scallops and crab is not yet being...

UK ministers are preparing to sideline the SNP and unilaterally establish freeports in Scotland, in a move which will provoke a furious constitutional row between London and Edinburgh. Whitehall officials are drawing up plans to invite direct bids from Scottish port authorities to become freeports, which will receive significant tax...

Economists are warning that Boris Johnson’s much-heralded “levelling up” agenda must amount to more than quick-fix improvements to disadvantaged areas of the Midlands and north of England if it is to make an impression on the UK’s entrenched social inequalities.The prime minister will on Thursday attempt to put some flesh on the bones of his oft-repeated slogan, using a speech in the West Midlands to say that he aims to restore a sense of “pride in their community” among residents of areas that have felt left-behind for decades.But with MP Neil O’Brien appointed to advise Mr Johnson on the...

Covid vaccine passports could be made mandatory for large venues like nightclubs, Government papers say

Covid vaccine passports could be made mandatory in large venues that fail to introduce them on a voluntary basis, Government papers say. Despite ministers repeatedly stating domestic passports would not be used within the UK, Boris Johnson said yesterday businesses would be encouraged to use the NHS Covid app, which shows proof of coronavirus jabs and past infection.

Every adult in the UK has been offered a Covid vaccine ahead of restrictions easing in England on Monday, the government says. Around 88% of adults have had a first dose and around 68% have had both, according to the latest figures. Prime Minister Boris Johnson said the vaccination target...

Use of the pass at large and "higher-risk" events will not, however, be a legal requirement. With England's full reopening of clubs and festivals confirmed to go ahead on Monday (July 19), the UK government has encouraged those running events and venues to use the NHS COVID Pass on entry.

The government has a cynical tradition of saving up bad news and releasing it just as MPs head off for their summer break.

Dawn Butler: Why was Labour MP ordered to leave the Commons?

In highly charged scenes on Thursday, the Labour MP Dawn Butler was ejected from the House of Commons after repeatedly refusing to withdraw an accusation that Boris Johnson is a liar.“The prime minister has lied to this house time and time again,” she told the deputy speaker, Judith Cummins. When asked to “reflect on her words”, Ms Butler said: “It’s funny that we get in trouble in this place for calling out the lie, rather than the person lying.”Going on to cite a popular social media video – a collection of statements made by Mr Johnson deemed untrue, including...

Covid deaths likely to rise to 200 a day this summer, say government scientists

Covid deaths are likely to rise to 200 a day and hospitalisations will "reach at least 1,000 per day" following the easing of restrictions on July 19, the Government's scientific advisers have warned. At the peak of the winter wave, more than 4,200 people in the UK were admitted to...

Chinese President Xi Jinping, pressured to resign by Li Keqiang and other Politburo members, is escorted to a coastal luxury villa while Li, along with other top civilian and military officials, forms a new government in Beijing. The scene from a recently published book is imaginary, but its author, retired...

British Health Secretary Sajid Javid issued an apology on Sunday for saying people should no longer "cower" from the coronavirus. "I've deleted a tweet which used the word 'cower'. I was expressing gratitude that the vaccines help us fight back as a society, but it was a poor choice of word and I sincerely apologise," Javid said on Twitter. "Like many, I have lost loved ones to this awful virus and would never minimise its impact."

Falling case numbers may yet save the PM's bacon

Two years into his premiership, Boris Johnson finds himself - yet again - in a tight spot. The significant poll lead the Conservative Party has sustained over Labour ever since the vaccine rollout began in earnest at the start of the year is evaporating. YouGov and Survation both have the Tories dipping below the 40 per cent threshold, their lead down to four points in their latest surveys. Opinium has just recorded a ten-point drop in the Government’s net approval rating for its handling of the pandemic – a promise of trouble down the line.

Labour must say it out loud: Brexit needs to be reversed

In Northern Ireland, the Leavers’ folly is now manifest. How can the opposition stay silent about the root cause of the crisis?

Cryptocurrencies could lead to ‘limitless’ losses for UK government