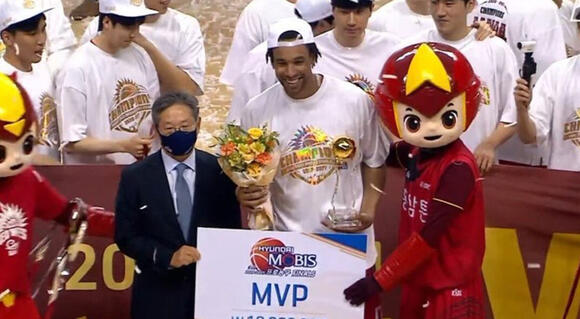 It didn’t take long for former Ohio State forward Jared Sullinger to leave his mark on the Korean Basketball League, as he led Anyang KGC to the league title with a four-game sweep of KCC Egis over the weekend.

Sullinger, who only joined the team in February after nearly three seasons away from professional basketball, was also named the MVP of the KBL Finals after he finished with 42 points, 15 rebounds, four assists and three steals in Game 4. He averaged a league-high 27.1 points and 12.3 rebounds in 20 games this season for Anyang KGC, which just captured its third championship in the last decade.

A former five-star prospect from Columbus Northland, Sullinger averaged 17.3 points and 9.7 rebounds in two seasons at Ohio State. He was a two-time All-American, two-time first-team All-Big Ten selection, national freshman of the year, Big Ten freshman of the year and MVP of the 2011 Big Ten Tournament and led the Buckeyes to an appearance in the 2012 Final Four.

Sullinger was a first-round pick of the Boston Celtics in the 2012 NBA Draft and spent four seasons with the Celtics before joining the Toronto Raptors on a one-year deal in 2016. After missing half the season due to a foot injury, he was traded to the Phoenix Suns, who waived him the following day.

Sullinger averaged 10.8 points and 7.5 rebounds in 269 career games in the NBA. He also played two seasons for the Shenzhen Aviators of the Chinese Basketball Association, where he was the league’s leading rebounder.

Sullinger has also been a part of the Ohio State alumni team in The Basketball Tournament, which was originally called Scarlet & Gray but is now known as Carmen’s Crew. He is now a coach for the team, which won the tournament title in 2019 and will look to avenge a shocking first-round upset in last year’s tournament when it resumes play this summer.

It can be argued that the off-court ventures of Los Angeles Lakers star LeBron James are just as successful if not more than what he has accomplished on the basketball court. And now he is teaming with a pair of NBA All-Stars for his latest. LRMR Ventures, the family office...
LOS ANGELES, CA・1 DAY AGO
BuckeyesNow

Lewis was the second USC transfer in as many years to have an eligibility issue upon his arrival.
COLUMBUS, OH・2 DAYS AGO
BuckeyesNow

Olave leads all rookies in receiving yards and is second among rookies in receptions, trailing only former teammate Garrett Wilson.
COLUMBUS, OH・19 HOURS AGO
BuckeyesNow

"I know he’s frustrated, but we’re not as far away as we think."
COLUMBUS, OH・2 DAYS AGO

Here's the latest from the Woody Hayes Athletic Center in Columbus.
COLUMBUS, OH・2 DAYS AGO
BuckeyesNow

"If you have questions about the defense – what we’re doing, how we’re doing it, why we’re doing it – he has all the answers for you."
COLUMBUS, OH・8 HOURS AGO
BuckeyesNow

"I didn’t really have any expectations but to just fly around and do my job."
COLUMBUS, OH・1 DAY AGO
BuckeyesNow

"We just try to help each other the best we can and help the team win."
COLUMBUS, OH・1 DAY AGO