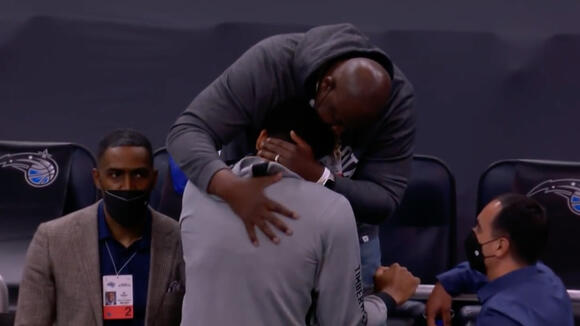 “I just have so much to thank my mom for”

Karl-Anthony Towns has experienced immeasurable heartbreak in the past 14 months. His mother, Jacqueline Cruz-Towns, was diagnosed with COVID-19 in March 2020 and placed in a medically induced coma. She died 19 days later, on April 13, at age 58. Towns lost six more family members, including his grandmother, to COVID-19 and then endured his own “scary” experience with the disease that caused him to miss 13 games early in the season. He was also hit by a car during the offseason.

Through it all, Town’s father has been a source of strength for him. Karl-Anthony Towns Sr. also tested positive for COVID-19 last year, but recovered. In March, he was able to attend his first Timberwolves game since Cruz-Towns’s death. And on Sunday, Mother’s Day, the father and son shared a tearful embrace before the Timberwolves’ game against the Magic.

Reflecting on his personal hardships and the difficulties of the pandemic season after the game, Towns said he thought at times this year, “Do I even want to do this anymore? Do I want to play ball anymore?” Ultimately, he credits his mom for helping prepare him to deal with anything life throws at him.

“There’s just a strength that’s been instilled in me since I was young,” Towns said. “My mom has, in weird ways, I feel, prepared me for this moment to handle more than I ever thought I possibly could. I’m just taking that strength in everything I’ve been through in my life. … It’s just something that, through life, I’ve garnered a lot of strength through a lot of trials and tribulations and it’s made me the man I am today. I wouldn’t change it for anything.

“I’ve been through so much bull---- in recent years and had my name thrown in so many things, and it’s because of my mother and the morals and values she’s taught me, and especially my father, I’ve been professional every step of the way, even when it was really hard.

With four games left in the season, Towns said he is going to give it his all during the final week but he’s still looking forward to the end of the season so he can take some time for himself.

“For me, personally, I’m just excited to, in a selfish way, just hear the last horn go off and finally take time to really try to heal the right way,” Towns said. “I’ve put basketball front and center in my life so I wouldn’t have to deal with the demons on the back end, but it’s going to be good to really get some help. I’m excited for that, personally, and also when that last horn goes off to truly take a step back and be proud of where I’m at. I’ve come a long way this year. So I’m just going to be taking a step back and truly take a moment to give myself a pat on the back and be happy of how far I’ve come.”

The best of SI

The positive drug tests for top trainer Bob Baffert’s horses just keep piling up, as do the excuses. ... Burgeoning Marlins star Jazz Chisholm owes his success to his grandmother, herself a former star infielder. ... Which NFL divisions are the strongest? ... Former NFL player A.J. Francis is trying to make it as a WWE star.

Around the sports world

The NFL had been touting “Rodgers vs. Mahomes” in a commercial for the upcoming season but it’s been removed. ... Former NFL player Brandon Bair saved a man from a fiery train crash. ... The Canadiens called up Alex Belzile for the final few games of the season, keeping their 104-year streak of employing at least one Quebecois player alive. ... Connor McDavid only needed 53 games to notch 100 points. ... 73,000 people attended the Canelo Álvarez–Billy Joe Saunders fight indoors at AT&T Stadium, the largest crowd in the U.S. since the start of the pandemic.

He just towers over the rest of the field

Boban with the clutch three!

This was a weird one

Steph never takes his foot off the gas

What a good son

A four-year-old Brooklyn boy used his mom’s credit card to buy 1,000 Spongebob popsicles. ... Mare of Easttown star Kate Winslet had high praise for Wawa after finally seeing one in the flesh.

(I heard the organist in Atlanta play this during a Rhys Hoskins at-bat on Sunday Night Baseball. Great pull.)

Email dan.gartland@si.com with any feedback or follow me on Twitter for approximately one half-decent baseball joke per week. Bookmark this page to see previous editions of Hot Clicks and find the newest edition every day. By popular request I’ve made a Spotify playlist of the music featured here. Visit our Extra Mustard page throughout each day for more offbeat sports stories.

Former NBA player Shannon Brown was trending on social media on Friday night after a recent picture of him went viral. Brown has been out of the league for several years now and currently plays for Ice Cube’s Big 3 league. Shannon hasn’t surfaced on the scene in a while until now. His fans came to his defense when some online users began to criticize his new appearance.

Lakers Makes Their First Move Of The Offseason

This past season was an extremely difficult one for the Los Angeles Lakers. While the team had a tremendous start to the season, things quickly went downhill as both Anthony Davis and LeBron James faced injuries near the playoffs. While the team eventually made it to the playoffs, the Lakers were still forced into the seventh seed in the Western Conference, and the Phoenix Suns proved to be too strong of a first-round matchup.

It’s the proverbial calm before the storm for the Phoenix Suns and the Milwaukee Bucks. Giannis Antetokounmpo and company are just a win away from capturing the NBA title for the first time in 50 years. To put it simply, the Suns are in trouble. They’re in a do-or-die situation...

Aside from the backcourt, the Los Angeles Lakers need added shooting to help back LeBron James and Anthony Davis next NBA season. They could snap up one of the several credible shooters who are expected to become available, but taking in someone familiar with the Lakers’ system may be a better move.

Kevin Durant Roasts Zach LaVine On Instagram Live: "How You Come Overseas And You A Max Player And You Don't Have Service On Your Phone..."

Just as Team USA begins to hit a groove on the basketball court, it seems many of the players are getting into some shenanigans off the court as well. This past week, the story has been between Kevin Durant and Bam Adebayo, who seemingly have some sort of "beef" that has the entire internet laughing.

Boston Celtics legend and Basketball Hall of Famer Bill Russell announced Thursday that he is auctioning off many of his most prized personal possessions, including two of his 11 NBA championship rings. According to Kyle Hightower of the Associated Press, Russell is selling his 1957 and 1969 rings, which were...

Lakers Have Offered Kyle Kuzma And Kentavious Caldwell-Pope To "Almost Every Team" In The League, Per Adrian Wojnarowski

The Los Angeles Lakers are making the headlines in recent hours after reports saw the light suggesting they're ready to make a splash this offseason. The team's front office is prepared to bring the right pieces to compete for the title next season, regardless of who can leave the organization.

Giannis Antetokounmpo was not going to let Chris Paul and the Phoenix Suns extend the 2021 NBA Finals to a Game 7, and he made sure of that by dropping one of the best performances in NBA Playoffs history. Unfortunately for Boston Celtics legend Bill Russell, he was not at Fiserv Forum to witness Giannis tow the Milwaukee Bucks to a 105-98 win Tuesday night.

The Atlanta Hawks were arguably the surprise the NBA season. They were able to make a run to the Eastern Conference Finals but were eliminated by the Milwaukee Bucks. After a taste of success, the Hawks to be looking to improve further taking the next step with a blockbuster trade.

After a tumultuous weekend, Damian Lillard is involved in any kind of rumor around the association. The Portland Trail Blazers point guard seems to be on his way out of the Moda Center after several seasons trying to win without success. Following another early playoffs exit, the All-Star is rumored...

It’s been a pretty rough go so far for Gregg Popovich as the United States men’s basketball head coach for the Summer Olympics. Team USA suffered multiple losses in the exhibition schedule and followed that up with an opening game loss in the Summer Olympics on Sunday. France upset Team...

Los Angeles Lakers star LeBron James didn’t have to wait for long to get an invite to a ProAm game. In fact, two of his peers from the NBA in Isaiah Thomas and Jamal Crawford quickly made their pitch to the champion forward. On Friday, LeBron sent out a tweet...

Stephen A. Smith Has Blunt Message For U.S. Basketball Team

Stephen A. Smith is among those who have taken to social media to react to the United States men’s basketball team’s shocking loss on Sunday. Team USA, led by Spurs head coach Gregg Popovich, suffered a loss in its opening game of the Summer Olympics on Sunday morning. The Americans were upset by France, 83-76, in the opening contest of the group stage.

Making the Cut's Winnie Harlow on Getting Serious with NBA Star Kyle Kuzma: 'Hang Up My Jersey'

Quarantine was a challenging time for people around the world for countless reasons. But one great thing came out of it for supermodel Winnie Harlow — her relationship with NBA star Kyle Kuzma. The young couple started dating in May 2020 after Kuzma, 25, sent Harlow, 25, a message on...

Miami Heat assistant coach Caron Butler took to Twitter recently to call out a police officer who was accused by social media users of planting evidence in a car in a viral video. In the alarming video, the officer is seen tossing something into the back seat of a citizen’s...

2021 NBA Playoff Awards: Is Giannis Antetokounmpo the MVP of the Postseason?

The NBA only hands out one individual postseason award every year and that’s the vaunted Finals MVP. So why not hand out a few more? Here is some hardware for the 2021 NBA playoffs. MVP: Giannis Antetokounmpo, Bucks. Two weeks ago, Antetokounmpo’s knee bent inward in what looked like a...

It looks like Minnesota Timberwolves star Karl-Anthony Towns still can’t get over the shocking result of UFC 264 on Saturday–one which saw Conor McGregor lose due to a scary injury. For those unaware, McGregor broke his leg in the first round of his bout with Dustin Poirier, causing a doctor’s...