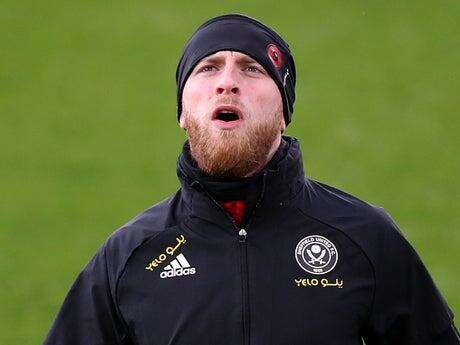 Sheffield United have confirmed they have initiated an investigation surrounding striker Oli McBurnie , after a video claimed to show him in an altercation.

Circulating on social media, the video post - blurry at the start - appears to show a male confronting a group of individuals, with the one holding the phone which was recording the incident the initial target.

The phone is dropped, before the man stamps on it and then turns his attention to an unknown person, seemingly pushing and possibly kicking them.

A short statement from the Blades read: “Officials at Sheffield United are aware of the video circulating on social media and are currently investigating.”

The caption alongside the video posted on Twitter reads simply “Ohhh Oli McBurnie”, while the recording does not capture what may have happened before the altercation on the street.

Sheffield United are already relegated from the Premier League after a dismal season, with just five wins and 18 goals scored from their 35 games.

They will finish bottom of the league unless they win all their remaining matches and West Brom fail to take another point.

McBurnie himself has scored once only in 25 appearances in all competitions, against Leicester in December.

The 24-year-old has been a regular in the Scotland international squad over the past couple of years, appearing as a sub in both the recent World Cup qualifiers against Israel and the Faroe Islands, though he has yet to score at senior level in 16 caps.

And while Sunderland remain among the favourites to lift the title come May, Lee Johnson and the club’s recruitment team remain on the lookout for new additions. The Black Cats clinched a deal for Alex Pritchard last week but remain active in the transfer market ahead of the big kick-off on August 7.

The Black Cats will travel to Tranmere Rovers for their penultimate pre-season friendly before the League One campaign begins. Head coach Lee Johnson is expected to priortise giving minutes to those who have featured less prominently in the pre-season programme so far, whether due to injury or selection. That means...

SHEFFIELD UNITED’s plans for the new season are in chaos after the first-team squad was forced to self-isolate. A forward and reserve keeper tested positive for Covid-19 on a pre-season camp in Spain. The duo were left behind while the rest of the squad was cleared to return to the...

After seeing nine players depart the club this summer, the Black Cats are understandably keen to see new faces arrive at the Stadium of Light. Luke O’Nien and Aiden McGeady have already signed new contracts with the club, with Alex Pritchard the only new signing through the door thus far.

Sky Sports has confirmed the addition of 12 live EFL fixtures to its September schedule, which kicks off with Derby County travelling to Birmingham after the first international break of the season. Wayne Rooney's Derby make the trip to St. Andrew's in front of the Sky Sports cameras on Friday,...

ARSENAL are preparing a £30million bid for Sheffield United goalkeeper Aaron Ramsdale, according to reports. The Blades have reportedly rejected two previous offers from the Premier League club for the England Euro 2020 squad member. According to talkSPORT, Arsenal a lining up a third bid and the fee could be...

Sheffield United have told Arsenal they will need to offer in excess of £32m to convince them to sell goalkeeper Aaron Ramsdale this summer. The Gunners are keen to rejig their goalkeeping department, with both first-choice Bernd Leno and backup Alex Runarsson available for transfer, and Ramsdale quickly emerged as a top target.

Arsenal will have to part with £30million if they wish to sign highly-rated Sheffield United 'keeper Aaron Ramsdale. Ramsdale is set to play Championship football next season after being relegated with Sheffield United following a disappointing 2020/21 campaign - having been demoted with Bournemouth the previous year. However, the 23-year-old's...

Leeds United have made an offer to Chelsea to sign Conor Gallagher on loan without a permanent option. Crystal Palace are also in the running. The Athletic revealed that The Whites have already made their pitch to Gallagher as they look to fulfil their primary target of a central midfielder this summer.

A couple of decades after Tony Soprano bemoaned the demise of the Gary Cooper type came the rise of the Steve Cooper type. Or, indeed, the rise of Steve Cooper himself; having never played in the Football League, he coached England’s Under-17s to World Cup glory and then led Swansea to the play-offs in successive seasons.

Leeds 'approach to sign Chelsea midfielder Conor Gallagher on loan, and are vying with Crystal Palace for the 21-year-old's signature after his impressive loan at West Brom'

Leeds have reportedly approached to sign Chelsea midfielder Conor Gallagher on loan for the upcoming Premier League season. The 21-year-old impressed on loan at relegated West Bromwich Albion in the top-flight last year after successful spells at Charlton and Swansea in the Championship. And according to the Athletic, Marcelo Bielsa's...

Burnley FC continued their Premier League preparations with a 0-2 win at Oldham Athletic. The Clarets, who played two almost-completely different sides at Boundary Park, took the lead in the second half through Jay Rodriguez and teenager Lewis Richardson’s first goal for the club. More than 900 Burnley fans were...

A goal in each half was enough for Stoke City to claim their third victory from three games in pre-season so far. The Potters made a dream start as Steven Fletcher dispatched a header past Jed Steer to open the scoring on three minutes. City 'keeper Joe Bursik made numerous...

Premier League Manchester United were beaten 4-2 by Championship side QPR in a pre-season friendly at the Kiyan Prince Foundation Stadium. The visitors went into the break level after Jesse Lingard's opener was cancelled out by Charlie Austin. A Lyndon Dykes double and a long-range stunner from Moses Odubajo saw...

ARSENAL are reportedly considering a third bid for Sheffield United goalkeeper Aaron Ramsdale. Sky Sports claim the Gunners are set to table an £18million deal that would include add-ons to take the offer up to £25m. Arsenal were previously linked with West Brom goalkeeper Sam Johnstone but are now believed...

Chelsea are looking to extend Conor Gallagher's contract, and are reluctant to sanction a permanent transfer for the midfielder this summer, according to reports. The 21-year-old has been included in the Blues' travelling squad for their pre-season trip to Ireland, after impressing during a loan spell at West Brom last term, amassing 32 outings across all competitions for the Baggies.

The Super Eagles midfielder played his first game for the Hornets as the Premier League side squared up against the English second-tier outfit. Oghenekaro Etebo made his Watford bow as the Hornets played to a 0-0 draw with West Bromwich Albion in Saturday’s pre-season friendly. The midfielder increased the number...

Chelsea’s loan army has gotten a lot of stick recently for its failures. There are destined to be many given the sheer magnitude of the group, but there have also been a plethora of success stories. One of the major benefits the Blues have discovered from years of loaning prospects out is how to identify a successful loan destination from the get-go. There are bound to be some round pegs in square holes given all of the moving parts involved in everyday operations at a football club. Regardless, for the most part, Chelsea has gotten quite good at finding positive environments for its players to grow.