Person
Bach
Person
Yo Yo Ma 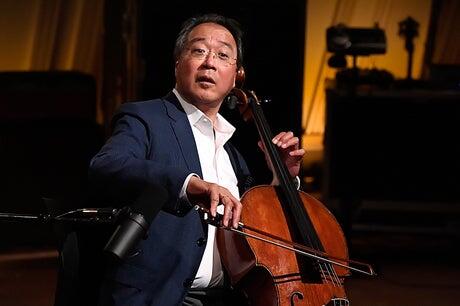 Cellist Yo-Yo Ma played a “Sarabande” from Bach ’s suite as part of his Songs Of Comfort initiative for India while the country confronts a dreadful second wave of the Covid-19 pandemic.

The mini-concert was the American-Chinese cellist’s way of comforting everyone during times of distress.

He wrote on Twitter: “For India. Sarabande from Bach’s Suite for Solo Cello No. 4. #songsofcomfort”

Ma chose to play Bach’s Suite for Solo Cello No 4 , which gave some comfort to individuals from their agony and sufferings, with many expressing gratitude toward him for his deeply moving rendition.

One fan wrote: “Needed this after trying to explain the situation in India to non-Indian relations who actually tried to say it is pretty bad here too. No, it is not.

“What is going on in India with people dying in hospital parking lots begging for beds and oxygen - it is absolute hell.”

“Thank you. Your rendition is so comforting!” wrote another fan.

“What a lovely gesture! Quite interestingly “Bach” literally means “survive” in bengali.” wrote another user.

Earlier this year in March, the Grammy-winning artist surprised onlookers at a vaccine site in Berkshire Community College, Massachusetts by delivering an impromptu performance.

He was at the location to get his second shot of the Covid-19 vaccine. After getting the jab, Ma performed for 15 minutes to those waiting in line after him.

Richard Hall, a member of the Berkshire Covid-19 Vaccine Collaborative, told The Berkshire Eagle he “wanted to give something back” to the community.

In September, he and pianist Emmanuel Ax performed at pop-up concerts around Berkshire for the frontline workers.

Person
Bach
Person
Yo Yo Ma

Srinivas S. lies on a gurney in an operating theater in St John's Hospital in Bengaluru as surgeons carefully remove bits of blackened tissue and rotten bone from his face.

Entering India During COVID: A Guide

Flying internationally is a complicated process during COVID-19, even if you are returning to your country of residence. On a recent trip home, Simple Flying had the chance to experience India’s new requirements for arrivals. Here’s an in-depth guide for your next trip!. Stamp. The arrival process begins as soon...

The pandemic has cast a huge shadow on India's flourishing movie business with shutdowns impacting box office revenues and the outlook looking grim for the industry. India's film industry, which is the world's largest in terms of the number of films produced and second largest after Hollywood in terms of its global reach is increasingly on edge since the first Covid-19 lockdown in March last year.

The cellist has asked organisers of the Prague leg of his Bach Suites world tour to move his recital next month from the Rudolfinum concert hall to the banks of the Vlatava River. Covid is not mentioned in his request but appears to be implicit. Yo-Yo Ma says: This concert...

Mask-free Sweden is approaching zero Covid deaths per day while the country's chief epidemiologist has swatted away fears over the Delta variant's infectiousness. In the last two weeks, Sweden has recorded an average of 0.6 Covid deaths per day, this compares with 74 fatalities in the UK and 329 deaths in US per day over the same period.

This phenomenon rippled through the interconnected economies of the world, including those in Africa. Indeed, India has risen over the past decade to become Africa’s thirdmost-important trading partner, after the European Union and China. In fact, the African market is precariously dependent on Indian suppliers for certain products, notably pharmaceuticals and rice. This is especially the case of East Africa, in which 35 percent of pharmaceutical imports come from India, and 20 percent of rice.

Savannah Guthrie had an incredible time in Tokyo where she reported on the 2020 Olympics for Today. But now she is back home in New York, the mother-of-two is struggling to get to sleep as a result of jetlag. The TV star shared photos of New York at sunrise on...

A woman who died from COVID-19 was the first recorded case of contracting 2 variants of coronavirus at the same time, researchers say

The co-infection case is the first of its kind and shows it is possible to catch two coronavirus variants simultaneously, researchers said on Sunday.

1,000 people are infected with Covid-19 after attending 'coronavirus-free' festival in Holland

At least 1,000 people have been infected with Covid-19 after attending a 'coronavirus-free' festival in Holland. The Verknipt Outdoor Festival in Utrecht was attended by over 20,000 people over two days earlier this month. It was a 'test for entry' event which required all festivalgoers to present a QR code...

What Are the Symptoms of Delta Variant COVID, and How Do They Vary From Traditional COVID?

After months of progress and “good news” on the COVID front, things are beginning to change. The infection rate is increasing, and in many locations, the number of hospitalizations is beginning to climb. Of course, the reason for this shift could be contingent on a variety of factors. The vaccination...

The IOC is investigating a situation in which two Chinese gold medalists had images of Communist China's founding leader Mao Zedong on their pins.

Dr. Fauci says US is on a DELTA covid 'trajectory that looks strikingly similar' to the UK and predicts America will record up to 200K cases per day before seeing a sharp decline

The nation's top infectious disease expert says the U.S. is currently on a trajectory in its Indian 'Delta' Covid outbreak that is similar to the one seen in the UK earlier this year. In a conversation with the Center for Strategic and International Studies on Tuesday, Dr Anthony Fauci discussed...

Americans have accused Australia of cheating after they won gold in the women's 4x100 medley relay race. The Aussie swimmers clinched gold in the epic race on the weekend and Kaylee McKeown (backstroke), Chelsea Hodges (breaststroke), Emma McKeon (butterfly) and Cate Campbell (freestyle) stood proud on the podium. However, they...

The first transgender couple to have become parents in the UK said a nurse did not let them see their newborn daughter because they were “not the legal parents”. Jake and Hannah Graf, from south London, said that they were both “nearly in tears” in the hospital car park after the nurse said that they would not be allowed to meet the baby girl.

When it comes to streaming services, it's not uncommon for various platforms to make changes to their offerings by adding and removing content not only to keep things fresh but also for contractual reasons. Now, Disney+ has removed a fan-favorite Jack Black film from the platform, 2010's Gulliver's Travels. As of August 1st, the film is no longer available to stream on Disney+ in the United States.

The news followed a turbulent week at the Olympics for Biles. She stepped away from several events due to mental health concerns. Biles was also dealing with what’s known as “the twisties,” which make it difficult for gymnasts to pinpoint themselves in the air. U.S. gymnast Simone Biles revealed that...

AN ANTIQUES Roadshow couple were left gutted when an expert revealed the disappointing truth behind an brooch passed down from their grandmother. The pair were on the BBC programme with a mixed haul of jewellery - with some varying degrees of preciousness. They were joined by jewellery historian John Benjamin...

MEGHAN Markle's 40th birthday cake has been ordered by Prince Harry from a bespoke bakery that charges more than £160, it's been claimed. The Duchess of Sussex reportedly wants an intimate celebration at her and Prince Harry’s £11million mansion in Santa Barbara, California. With Meghan turning 40 on Wednesday, Harry...