Tallulah Willis shared photos of her giant engagement ring, and an expert says it could be worth up to $200,000 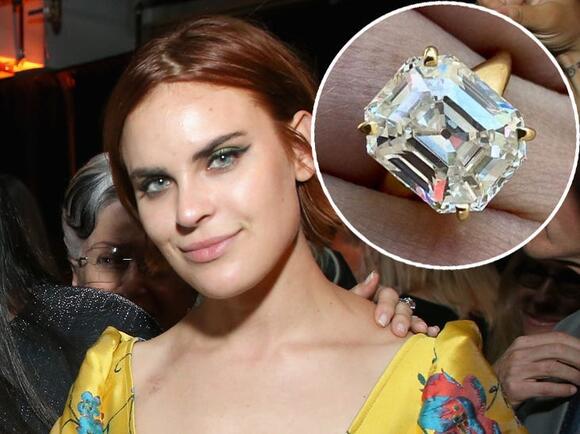 The couple announced the news via Instagram on Tuesday, and shared numerous photos from their proposal - including the first shots of the 27-year-old's giant engagement ring.

According to Ajay Anand, the founder and CEO of diamond search engine Rare Carat , Willis' ring could have cost around $200,000.

In an Instagram post , Willis said she "had to be in the drivers seat" when it came to choosing her ring due to her "lowkey (highkey lol) obsessive, perfectionist, micro-lens way of viewing special things" in her life.

She also described her fiancé as "the most understanding precious human noodle," and said that he understood why she wanted to take the lead once they began "seriously" discussing an engagement.

From there, according to Willis, she and a friend "scoured the world" and left "no stone unexamined."

"After much deliberation we decided on this 1910s elongated asscher cut forged in a riverbed," she wrote.

Speaking with Insider over email, Anand said Willis' step-cut jewel - which is a rectangle shape - looks like it is between a 5- or 6-carat diamond.

"Step-cut diamonds like this one require high clarity, so you can be assured this is a very clean stone," he said. "Paris Hilton and Bethenny Frankel also picked step cuts for their recent engagements. The cut is classic and on-trend."

Her band, according to Anand, appears to be "sleek" and "tapered." He believes it's made from 18-karat gold, as 14-karat gold would look "less bright-yellow in tone."

"Yellow hues are complemented by yellow gold, making it likely that the designer went down to a lower color to compensate for the cost of a high clarity diamond," he continued. "It's a smart way to save cash if your heart's not set on platinum."

Anand added: "All told, It is a very unique cut. This one would cost a ton more if it was set in platinum, requiring a D, E, or F colorless diamond."

Before talking about her engagement ring online, Willis first shared pictures of Buss proposing to her in what appears to be a backyard. For the post's caption, she wrote: "with absolute most certainty."

Buss, on the other hand, shared his own series of pictures and wrote: "I can finally call you my fiancée. Love you forever Buuski Lu, you are my best friend ❤️ #maythefourthbewithus."

Wow, gorgeous ring! I would be nervous wearing a ring that size but what an awesome stone and setting.

Paris Hilton and Carter Reum are parents to a son — but her husband, whose estimated worth is $40 million, also has a 10-year-old daughter he allegedly "abandoned" right after her birth who has never met her stepmom and reportedly has no relationship with her father, RadarOnline.com has learned. A source revealed the last time Carter, 41, allegedly saw his daughter. He was there when his ex-girlfriend, Laura Bellizzi, gave birth to their daughter, Evie, but "within minutes of her arrival, he held her, kissed her on the forehead, handed her back to her mother, and left."The insider claimed that "Evie has...
5 HOURS AGO
Distractify

“King of Pop” Michael Jackson’s family has been all over the news lately. The late pop star’s ex-wife Lisa Marie Presley passed away on Jan. 12. His daughter, Paris Jackson, attended the Los Angeles premiere of the documentary Pamela, a love story on Monday, Jan. 30. And that same day, Michael’s son Prince Jackson congratulated cousin Jaafar Jackson on his role as the “Thriller” singer in the upcoming biopic Michael. But what about Michael’s other son? Where is Blanket Jackson now?
LOS ANGELES, CA・2 DAYS AGO
INSIDE News

While Marc Anthony and Nidia Ferreira's wedding was taking place, Jennifer Lopez and Ben Affleck could be seen having a heated argument while wearing ball gowns at the premiere of the new JLO movie.
21 HOURS AGO
Insider

Finn Wolfhard says that he and his 'Stranger Things' castmates don't talk all the time: 'Do you text your cousins every day?'

Finn Wolfhard said that his "Stranger Things" castmates are like family, and he knows that he can ask them for help if he needs it.
22 HOURS AGO
Insider

David Harbour's "Hellboy" was a box-office flop that wasn't well-received by fans of the original movies, and Harbour has been candid about the film.
1 DAY AGO
Insider

"Everything blurred, like it was happening in slow motion," Anderson wrote, adding, "I felt like I died that night, too."
1 DAY AGO
Abby Joseph

When Jordan was only 13 years old, his mom passed away. Several years later, his dad remarried, but Jordan never got close to his new stepmom and even moved in with his aunt. Jordan is now 27 and has recently gotten married. And at his wedding, he refused to have the traditional mother-son dance with his stepmom. His dad reached out to the public via Reddit to explain what happened.
2 DAYS AGO
Insider

The daughter of "Westworld" star Thandiwe Newton and notable movie director Ol Parker weighed in on the "nepo baby" debate.
3 HOURS AGO
Insider

Kanye West's former security guard Steve Stanulis 'cannot escape' the tabloid drama, even 7 years later. So he made a tell-all documentary about it.

Steve Stanulis worked briefly as a bodyguard for Kanye West in early 2016 but became a tabloid figure whose association with West has persisted.
5 HOURS AGO
Insider

In "Anne Rice's Mayfair Witches," the actor plays a neurosurgeon who learns she's a descendant of witches and wields a secret, lethal power.
1 DAY AGO
Insider

A couple whose public engagement was mocked as 'cringe' in a viral TikTok pushed back, and were overwhelmed by support

Linn Ekebom loved it when Shannon McGee proposed with a flash mob in Central Park, and was shocked to find the moment a source of mass mockery.
NEW YORK CITY, NY・2 DAYS AGO
Insider

'The Last of Us' star Nick Offerman says he almost passed on his role until his wife Megan Mullally read the script: 'You have to do this'

Nick Offerman said that he originally didn't have time in his schedule to take his much-praised role in "The Last of Us" episode three.
5 HOURS AGO
Insider

The "Twilight" actor named the moment with his ex-girlfriend as the one moment in his life he would choose to go back to and change if he could.
12 HOURS AGO
Insider

Ashton Kutcher recalled Danny Masterson as their leader on "That 70s Show," and said Masterson "kept the cast in line."
1 DAY AGO
Insider

'The Last of Us' creator says he used Linda Ronstadt's 'Long, Long Time' because it's an ode to 'middle-age love'

Episode three of "The Last of Us" detailed the unexpected romance between two survivors, Bill and Frank.
MASSACHUSETTS STATE・1 DAY AGO
Insider

The 10 best movies coming to Netflix in February

Check out all "The Lord of the Rings" movies, "Call Me By Your Name," and the Netflix rom-com "Your Place or Mine."
1 DAY AGO
Insider

Ashton Kutcher once told Harry Styles he was 'really good' at karaoke because he didn't know who he was or that he sings professionally: 'Now I feel like a jerk'

The star told Esquire that he felt "so dumb" when he realized who Styles was after he complimented the musician on his performance at a karaoke party.
2 DAYS AGO
Insider

Bautista said on "The Late Late Show with James Corden" that he wants to star in every genre but has yet to get roles in the "rom-com space."
10 HOURS AGO