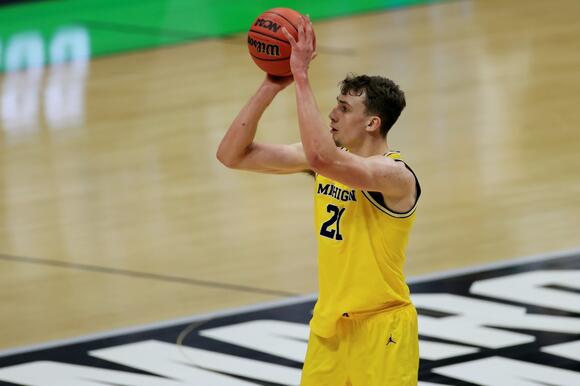 WEST LAFAYETTE, Ind. — Michigan star forward announced Tuesday he would enter the NBA Draft. He is projected as one of the top players in the draft this year.

During his sophomore season, he was one of the top players in the Big Ten. He averaged 12.5 points, 6.5 rebounds, 3.0 assists, 1.3 steals and 1.0 blocks while starting in 28 games. He was named second team All-Big Ten by coaches and the media following the 2020-21 season.

"Sadly, now it’s that time. It’s time for me to say goodbye to Ann Arbor, and to take on this whole new challenge in the NBA," Wagner wrote in a letter to Michigan fans. "I don’t know what the future will hold for me there ... but I’m excited to find out."

The 6-foot-9, 220-pound forward is a versatile prospect and a coveted defender. Wagner forced 2.3 turnovers per game last season. he also shot 34.3% from the 3-point line.

"I’ll be honest ... I’m definitely feeling a lot of emotions about it," Wagner wrote. "I’m hopeful, more than anything — as playing in the NBA has been a big dream of mine. It’s something I’ve been working extremely hard for. And after talking with my coaches and my family, I know it’s something I’m ready for."

He will be the second coach to leave the Fighting Illini for the Wildcats, joining Orlando Antigua.

Coleman has been with Underwood throughout all of his four seasons as an assistant coach after joining the Illini staff in April 2017.

After an impressive weekend against Iowa, Indiana baseball's Cole Barr earned Big Ten Player of the Week Honors on Tuesday. He batted .600 in three games and hit home runs in both of the Hoosiers' victories. He also recorded five RBI and six runs scored.

Barr was the first Indiana player to win Big Ten Player of the Week since Elijah Dunham during opening week a year ago, on Feb. 24, 2020. Barr leads the Hoosiers with six home runs this season, and he now has 25 for his career.

This was his first Player of the Week award.

Stories Related to the Big Ten

Become Part of the BoilermakersCountry Community!

Lakers Makes Their First Move Of The Offseason

This past season was an extremely difficult one for the Los Angeles Lakers. While the team had a tremendous start to the season, things quickly went downhill as both Anthony Davis and LeBron James faced injuries near the playoffs. While the team eventually made it to the playoffs, the Lakers were still forced into the seventh seed in the Western Conference, and the Phoenix Suns proved to be too strong of a first-round matchup.

The Milwaukee Bucks beat the odds and are now your reigning NBA Champions. They swept the same team that beat them last year in the Miami Heat, got past the clear-cut favorite Brooklyn Nets, held off an inspired Atlanta Hawks team, and came back from a 0-2 hole to beat the Phoenix Suns in the NBA Finals.

“Eight and a half years ago, when I came into the league, I didn’t know where my next meal would come from. My mother used to sell things on the street. Now here I am, sitting at the top. In the post-game interview that made his team NBA champions on...

In the aftermath of the Bucks’ NBA Finals win, Giannis Antetokounmpo’s girlfriend Mariah Riddlesprigger had a message for ESPN’s Kendrick Perkins. Perkins made headlines earlier in the playoffs when he declared that Khris Middleton, not Giannis, was the “Batman” for the Bucks. The former NBA champion center called Giannis the team’s “Robin.”

The Phoenix Suns and their dream ride through to the NBA Finals stalled just before reaching its glorious destination, with the team unable to carry on and win their first ever championship, losing to the Milwaukee Bucks after six games. Even for a season that extended deep into July—something unseen...

INDIANAPOLIS, Ind. — While Michigan football is finally giving Ohio State a little more credence than ‘it’s another championship-type game, like any game on our schedule,’ the Buckeyes have long treated the rivalry with the Wolverines like it actually is the championship game — regardless of whether OSU was a College Football Playoff-caliber team.

NBA superstars often involve themselves in their organization's offseason dealings, and the Golden State Warriors are no exception. Their star players famously recruited Kevin Durant to join the team in 2016, but that move was relatively easy for the Warriors to make. They only needed to clear the cap space to sign him, and the 2016 cap spike made that substantially easier. Five years later, the circumstances are substantially different.

Kevin Durant Roasts Zach LaVine On Instagram Live: "How You Come Overseas And You A Max Player And You Don't Have Service On Your Phone..."

Just as Team USA begins to hit a groove on the basketball court, it seems many of the players are getting into some shenanigans off the court as well. This past week, the story has been between Kevin Durant and Bam Adebayo, who seemingly have some sort of "beef" that has the entire internet laughing.

Phoenix Suns coach Monty Williams took the unprecedented step of speaking to the Milwaukee Bucks after they defeated him in the NBA Finals. That came at the invitation of Giannis Antetokounmpo, who explained his reasoning in an interview. Giannis told ESPN’s Malika Andrews that Williams wanted to talk to the...

Wayzata’s former state Class AA tennis singles champion Nick Beaty has won a Big Ten Conference Sportsmanship Award as captain at the University of Michigan. Each of the teams in the Big Ten has a Sportsmanship Award winner, selected by coaches, site managers and umpires. “It’s a nice award to...

The Big Ten's top 10 returning RBs by production from 2020

For decades, the Big Ten Conference has been synonymous with running the football. Some of the best running backs in college football history once called the conference home. Times have changed, of course, with spread offenses placing more of an importance on passing. But strong running attacks continue to be a staple of any good Big Ten offense.

Moses Moody, Arkansas (Photo by Justin Casterline/Getty Images) With the NBA Draft less than a month away and the Charlotte Hornets being cemented into the 11th overall pick barring a trade, Charlotte can start to key in on draft prospects who make the most sense for the Hornets at 11.

Happy Monday Pacers fans! I hope your day is starting well and you’re still revelling in a great weekend. On today’s episode of the Indy Cornrows pod, I brought on a good friend, great basketball mind, and fantastic prospect scout, Ben Pfeifer. Much of the fan base seems to be conflicted on University of Michigan forward, Franz Wagner, who is often mocked to the Pacers at 13.

After winning a championship with the Toronto Raptors in 2019, Kawhi Leonard quickly became the hottest commodity in the entire NBA. He was pursued by numerous teams in free agency and in the end, he had his choice between the Los Angeles Lakers, Los Angeles Clippers, and Raptors. Eventually, Kawhi decided to go home to Los Angeles and play for the Clippers, who went out and got Paul George to complement Kawhi's skill set.

First-team All-ASUN relief pitcher Fraser Ellard was the first Liberty baseball player selected of the 2021 Major League Draft on Monday, and his teammate, second baseman Will Wagner, was also selected before the draft concluded. Ellard was selected by the Chicago White Sox in the eighth round with the No....

Former Michigan forward Franz Wagner continues to impress NBA scouts as he prepares for the 2021 NBA Draft. Wagner is likely to hear his name called during the first half of the first round, and could end up being a top-10 selection. He recently sat down with ESPN draft expert Mike Schmitz to go over his game in detail.

As everyone who follows the Big Ten Conference is used to by now, the conference runs through the Ohio State Buckeyes. Until someone takes them off of their throne, the Big Ten continues to belong to them. And while there are a variety of reasons as to why that is the case, there is one major factor that leads to this dominance of one league. Recruiting.

There are vast differences between how Mel Tucker runs Michigan State’s program and the way Mark Dantonio did things for 13 seasons. Perhaps Tucker will be taking a well-worn classic from Dantonio’s playbook this summer. See, Dantonio was a master at taking the smallest of slights — real or perceived...

WEST LAFAYETTE, Ind. — Former Purdue soccer player Ena Sabanagic signed a professional contract with HK in Kópavogur, Iceland, the university announced Wednesday afternoon. The club is a part of the Women's Champions League in Iceland. Sabanagic, a midfielder from Hanover Park, Illinois, graduated from Purdue in May 2020, with...