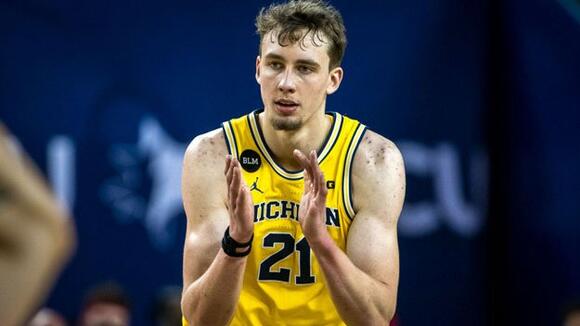 The Michigan sophomore made the announcement Tuesday. 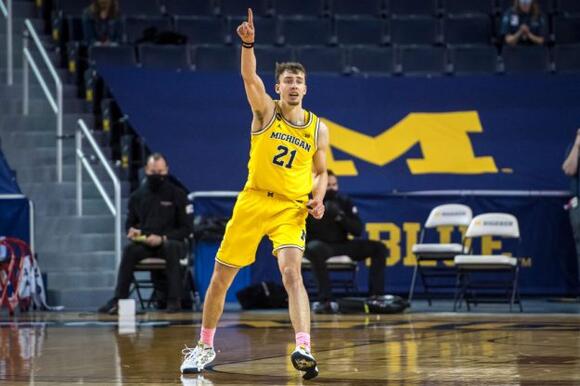 ANN ARBOR, MICHIGAN – FEBRUARY 18: Franz Wagner #21 of the Michigan Wolverines points during the second half against the Rutgers Scarlet Knights at Crisler Arena on February 18, 2021 in Ann Arbor, Michigan. (Photo by Nic Antaya/Getty Images)

His brother, Moritz, plays for the Orlando Magic and is also a former Wolverine. 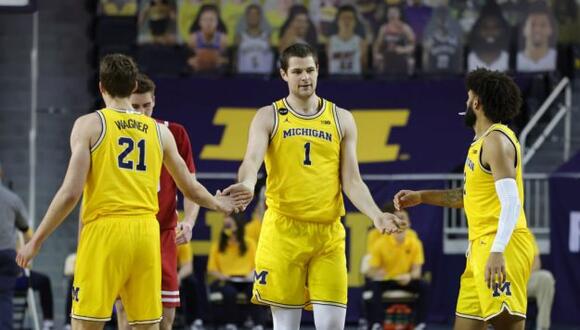 ANN ARBOR, MICHIGAN – JANUARY 12: Hunter Dickinson #1 of the Michigan Wolverines celebrates with teammates Franz Wagner #21 and Isaiah Livers #2 after a three pint shot during the second half of the game against the Wisconsin Badgers at Crisler Arena on January 12, 2021 in Ann Arbor, Michigan. Michigan defeated Wisconsin 77-54. (Photo by Leon Halip/Getty Images)

Michigan awaits freshman center Hunter Dickinson’s decision to stay for his sophomore season or go into the NBA draft, which is July 29.

The Wolverines are losing Isaiah Livers, Mike Smith, Chaundee Brown and Austin Davis from this year’s team. Eli Brooks is returning, taking advantage of an extra year of eligibility the NCAA is allowing due to the pandemic.

© 2021 Associated Press. All Rights Reserved. This material may not be published, broadcast, rewritten, or redistributed.

It appears that Los Angeles Lakers assistant coach Lionel Hollins is no longer with the franchise. Hollins, 67, has been an assistant under head coach Frank Vogel’s leadership for the Lakers for two years. While the Lakers won a title in Hollins’ first year on the bench, they were eliminated...

The best trades should be win-win for both sides. It rarely works out that way, which is why we break down the winners and losers from trades. However, the first big pre-Draft trade came down Monday between the Grizzlies and the Pelicans, and there are a lot of winners and not really many losers. You could try to argue Eric Bledsoe is a loser, but he didn’t fit well in New Orleans and we don’t know where he’s ultimately going to end up — it’s not Memphis — so it’s too early to make that call. Plus, he’s still going to get paid a lot of money to play NBA basketball next season. That’s not losing in my book.

The Phoenix Suns made a miraculous run to the NBA Finals this past season in their first trip to the playoffs in over a decade. Praise has rightfully been given to head coach Monty Williams and rising young talents Devin Booker and Deandre Ayton, but a lot of the credit for the remarkable year goes to just one man: Chris Paul.

Bronny James, the son of Los Angeles Lakers star LeBron James, is one of the top recruits in his high school class. The 2023 recruit is the No. 6 combo guard and No. 30 overall recruit in the class, per 247Sports’ Composite Rankings. Given his name, it’s fair for fans...

Robert Parish Says Michael Jordan Is Not The GOAT Because He Didn't Defeat Great Teams: 'He Couldn't Beat Celtics, Pistons Got Old, He Couldn't Beat Lakers In Their Prime.'

Michael Jordan hasn't played basketball for almost 18 years. But still to this day, he is considered one the greatest player of all time. Jordan took some time to get to the championship level. But after eight years of missing out on the NBA Finals, Jordan ascended to the league and became the most dominant superstar in the NBA.

When we talk about the all-time greats in NBA history, chances are that PJ Tucker's name won't come up. But when it comes to the GOAT of sneakers, no one can sit at his table. Tucker has become famous around the league for his insane shoe collection. He never wears the same sneaker twice and travels around with dozens of pairs everywhere he goes.

The NBA offseason rumor mill is already churning, with several contenders angling for moves that might help them knock the Milwaukee Bucks off their perch. One insider told Bleacher Report's Jake Fischer he believes draft night could be full of trades. Teams could be hoping to move up or down the board, and it's also possible some organizations hope to leverage draft capital as a means of acquiring impact talent.

Minnesota Twins select UConn sophomore Kyler Fedko in 12th round of the MLB draft, teammate Caleb Wurster goes to Miami in the 15th round

UConn sophomore outfielder Kyler Fedko was selected in the 12th round of the MLB draft (369th overall) by the Minnesota Twins on Tuesday. Fedko, the reigning Big East Player of the Year, hit .396 for the Huskies this season with 12 home runs and 14 doubles. The Gibsonia, Pennsylvania native hit .412 in a COVID-19 shortened 2020 campaign. “I’m having so much fun,” Fedko said during the spring ...

Former Michigan forward Franz Wagner continues to impress NBA scouts as he prepares for the 2021 NBA Draft. Wagner is likely to hear his name called during the first half of the first round, and could end up being a top-10 selection. He recently sat down with ESPN draft expert Mike Schmitz to go over his game in detail.

The 2020-21 regular season is in the books for the Trail Blazers and the 2021 NBA Draft is quickly approaching. For the first time since 2016, the Blazers are set to enter draft night without a selection. However, that doesn’t mean that President of Basketball Operations Neil Olshey will sit on the sidelines during the process.

Considering he’s one of the greatest Phoenix Suns players of all time, it came as a bit of a surprise for some that Charles Barkley decided to pick Giannis Antetokounmpo and his Milwaukee Bucks to win the title in the NBA Finals. Barkley himself opened up about this bit of irony in a recent interview, and he also had a strong message to any Giannis naysayer left out there.

Hunter Dickinson Returns to Michigan Basketball for a Sophomore Year

When Jason Kidd was the head coach of the Milwaukee Bucks, he once made the entire team run sprints because Thon Maker didn't have an iPhone.

The 2021 NBA Draft is only 2 weeks away, and the Lakers have the 22nd overall pick. I wrote about who the Lakers should target if they do not trade their pick. Below is an outline of the players that would make sense for the Lakers for the 22nd pick.

Mitchell opts to pursue his dream, will enter the NBA Draft

Steffon Mitchell is taking the next step in his basketball career. The 2016 Shakopee High School graduate is forgoing his final year of college eligibility and will enter the NBA Draft, which will be held July 29 at the Barclays Center in Detroit, Michigan. Under NCAA COVID-19 eligibility rules, Mitchell...

2021 NBA Draft: What is Josh Giddey's ceiling in the NBA?