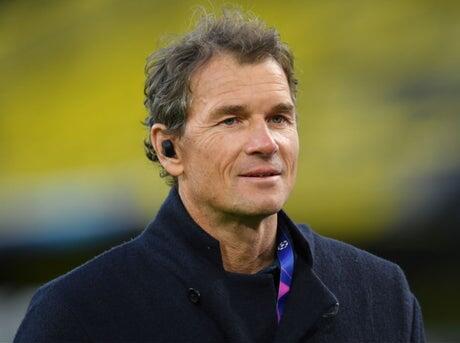 Former Arsenal goalkeeper Jens Lehmann has been sacked from Hertha Berlin ’s supervisory board after asking whether a television pundit was being used as a “token black guy”.

Aogo posted a screenshot of the message on Instagram with the caption: “Wow, are you serious? This message was probably not meant for me.”

Lehmann was sacked by Hertha Berlin on Wednesday in a statement released by the club’s president, Werner Gegenbauer, which read: “Such statements are in no way representative of the values that Hertha BSC stands for. We distance ourselves from all forms of racism and welcome the action taken by TENNOR Holding.”

Lehmann has since posted an apology on Twitter. “In a private message from my mobile phone to Dennis Aogo, an impression was created for which I apologised in conversation with Dennis,” he wrote. “As a former national player he is very knowledgeable and has a great presence and drives ratings to Sky.”

Lehman replaced Jurgen Klinsmann on Hertha’s supervisory board in May last year after taking up various coaching roles and working as a media pundit himself.

The 51-year-old retired as a player in 2011, having spent five full seasons at Arsenal between 2003-2008. He arrived ahead of the historic Invincibles season, won an FA Cup in 2005, and was sent off as Arsenal were defeated in the Champions League final in 2006.

He returned to north London as an emergency backup goalkeeper in the last months of his playing career and spent a year under Arsene Wenger as an assistant coach during the Frenchman’s final season in 2017/18.

Nathan Jones is confident Southampton can go toe to toe with Newcastle in Tuesday’s Carabao Cup semi-final second leg despite the sides being worlds apart in the Premier League table.Basement dwellers Saints lost the opening leg 1-0 and were reduced to 10 men when Duje Caleta-Car was sent off in the 86th minute at St Mary’s last week.Jones knows Southampton face a formidable task in trying to score against Eddie Howe’s third-placed Magpies – who have conceded only 11 goals in 20 top-flight matches – but wondered if the south-coast club’s underdog status in the cup contest could work in...
6 HOURS AGO
The Independent

Wrexham manager Phil Parkinson was “choked” they had not been able to hold off Championship high-fliers Sheffield United after his side were denied a famous victory by an added-time equaliser.Paul Mullin’s 27th goal of the season four minutes from time had put the National League leaders within sight of the FA Cup fifth round only for John Egan to make it 3-3 deep into seven minutes of additional time.Blades striker Oli McBurnie scored after just 64 seconds but goals from James Jones and Tom O’Connor early in the second half put the Welsh club on course for a second successive...
8 HOURS AGO
The Independent

Brighton boss Roberto De Zerbi insists the club must keep wantaway midfielder Moises Caicedo if they are to maintain their bid for a place in Europe.The sixth-placed Seagulls have two possible routes to the continent after they knocked out holders Liverpool to reach the fifth round of the FA Cup.De Zerbi has already seen attacker Leandro Trossard leave for Arsenal and Brighton have blocked the Gunners’ attempt to prise Caicedo away.The Ecuador midfielder missed the 2-1 win over Liverpool after publicly stating his desire to leave, but De Zerbi and Brighton are digging their heels in.“It’s already difficult for me...
11 HOURS AGO
The Independent

National League leaders Wrexham were denied another FA Cup giant-killing as 10-man Championship high-flyers Sheffield United snatched a stoppage-time equaliser in an absorbing 3-3 draw.The famous old Racecourse ground has witnessed its fair share of shocks – with a picture of Mickey Thomas’ famous free-kick goal against Arsenal in the FA Cup in 1992 hanging on the wall of the Turf Hotel adjoining the stadium – and this was almost one for a new era at the club.Watched by one half of their Hollywood ownership duo in Ryan Reynolds, Paul Mullin’s 27th goal of the season four minutes from time...
9 HOURS AGO