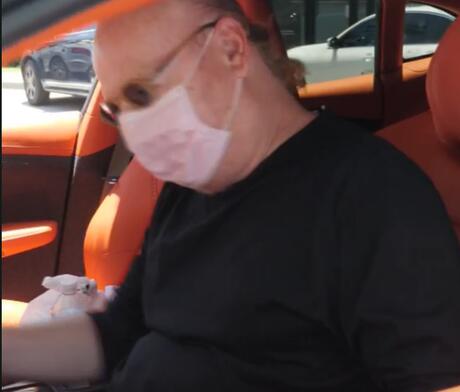 Manchester United co-owner Avram Glazer did not apologise to the club’s supporters for his role in the plans to form a European Super League when given the opportunity to do so by a TV reporter.

United fans protested against the Glazer family outside Old Trafford on Sunday, leading to the postponement of the club’s match against Liverpool, and have demanded for the club to be sold.

The protests came just weeks after the failed plot to launch a breakaway European Super League. Avram Glazer’s brother, Joel Glazer, was named co-chairman of the competition before it collapsed two days later due to fan backlash .

Glazer was confronted by a Sky News reporter in Florida, but refused to answer questions regarding the Super League, or the unrest amongst the fans.

The reporter, Sally Lockwood, approached Glazer, saying: “This an opportunity for you – an apology, perhaps?”

She also asked if the Glazers would be selling the club, and whether he had anything to say to the fans, but he continued to remain silent.

The 60-year-old drove away without engaging with the reporter.

Following the collapse of the Super League, Joel Glazer wrote a letter to Manchester United fans apologising for the Super League scandal and promising to “rebuild trust” with the club’s fanbase.

The family have remained silent following Sunday’s unrest, however.

Manchester United will allow Cristiano Ronaldo to leave after the World Cup, according to a report.
PREMIER LEAGUE・17 MINUTES AGO
The Independent

When is the England World Cup squad announcement?

Gareth Southgate is preparing to manage England at a third major tournament as he begins to narrow down his squad for the 2022 Fifa World Cup in Qatar.Fifa have permitted an expanded squad size for the tournament, with countries now permitted to include up to 26 players in their selection, with a minimum of 23.Each nation’s final squad must be submitted by 13 November 2022, one week before the World Cup begins on 20 November.The replacement of injured or Covid-19 positive players will be permitted until 24 hours before the start of a team’s first match in Qatar.England are expected...
FIFA・33 MINUTES AGO
The Independent

Brutally unfair as it would be, Steve Cooper looks set for Nottingham Forest sack

It transpired that Steve Cooper could not even win the sack race in the Midlands. Leicester City against Nottingham Forest had the air of El Sackico, the shootout to avoid the firing squad, but, with the stealth of a man who often went unnoticed, Bruno Lage contrived to collect his P45 before either Brendan Rodgers or Cooper could.A reprieve for Rodgers, courtesy of a 4-0 rout, may assume terminal proportions for Cooper, more because of the climate around Forest than the crime of propping up the top flight. Cooper’s downcast reaction gave the impression he fears the worst. Taking...
PREMIER LEAGUE・34 MINUTES AGO
The Independent

Liverpool vs Rangers live stream: How to watch Champions League fixture online and on TV tonight

Ryan Kent and Ben Davies could return to Anfield to face their former club on Tuesday night, as Rangers take on Liverpool in the Champions League.It has been a tough campaign for the Scottish side so far in Europe, receiving heavy beatings at the hands of Ajax and Napoli so far, by four and three goals respectively - though in truth it could have been more in both games.The Reds, meanwhile, suffered a 4-1 thrashing of their own in Italy, before bouncing back to see off the Dutch side last time out in Europe and give themselves a platform to...
PREMIER LEAGUE・1 HOUR AGO

Officials in Paris have announced that there will be no big screens in the city showing action from the upcoming 2022 Fifa World Cup in Qatar.The capital has followed several other French cities in boycotting the tournament, with Pierre Rabadan, the deputy mayor, confirming to AFP that this was for both “environment and social” reasons.Lille’s city council voted unanimously in favour of a ban on fanpark-style events last week, with Bordeaux, Marseille, Strasbourg and Reims among the cities since following suit.The timing of the tournament (20 November 20 - 18 December) in the Northern Hemisphere winter has also been cited...
SOCCER・1 HOUR AGO