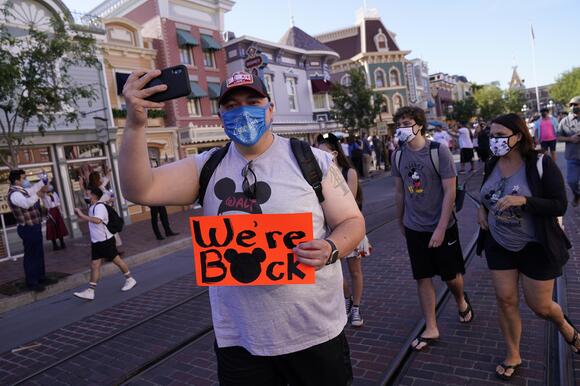 The state of nearly 40 million people has been among the most conservative in the U.S. with tight restrictions in place to curb the pandemic. Now, California has the lowest infection rate in the country and on Tuesday, Los Angeles and San Francisco received permission from the state to reopen bars, restaurants, museums and businesses more broadly.

Gov. Gavin Newsom, a Democrat who faces a recall election this year due in part to his handling of the pandemic, announced that the state is on track to fully reopen its economy in mid-June.

As vaccination numbers rise, more people are booking trips to favorite sites such as Northern California wine country, the Santa Barbara coast, and Disneyland, which reopened last week after an unprecedented 13-month closure.

Tourism revenue in the state plummeted from $145 billion in 2019 to $65 billion last year. The figure is not expected to top pre-pandemic levels until 2024 as international travelers stay away for now, said Caroline Beteta, president and CEO of Visit California, the nonprofit that markets the state.

“It’s a call to all Californians to not only help support this industry, which supports so many jobs in so many small businesses, but also the fact that it’s time you can safely get out in public, again, and I think we all need a little weekend getaway,” said Lt. Gov. Eleni Kounalakis.

During the pandemic, the Moscone Convention Center served as shelter for homeless residents, the city’s emergency operations hub, and a mass vaccination site.

“Now it’s time to get this building open for its core function of hosting meetings and large scale events to really support the heart of this city, and you’ll see this happening this fall,” D’Alessandro said.

Beteta said the state lost $12 billion from June 2020 through February as residents left to vacation out of state, including $1 billion that went to Mexico.

“This is about choosing California and choosing your fellow Californians first as a modern day act of patriotism, and helping get the state back on track,” she said.

LOS ANGELES (AP) — The California attorney general launched new anti-human trafficking teams to apprehend perpetrators and support survivors on Friday amid an alarming increase in labor and sexual exploitation statewide during the coronavirus pandemic. The state’s lockdown exacerbated problems with human trafficking, officials said Friday, and made it much...

PHOENIX (AP) — Extreme temperatures like the ones blistering the American West this week aren’t just annoying, they’re deadly. The record-breaking temperatures this week are a weather emergency, scientists and health care experts say, with heat responsible for more deaths in the U.S. than all other natural disasters combined. With more frequent and intense heat waves likely because of climate change and the worst drought in modern history, they say communities must better protect the vulnerable, like homeless people and those who live in ethnically and racially diverse low-income neighborhoods.

Federal holiday pressures companies to give Juneteenth off

NEW YORK (AP) — The declaration of Juneteenth as a federal holiday is putting the pressure on more U.S. companies to give their employees the day off, accelerating a movement that took off last year in response to the racial justice protests that swept the country. Hundreds of top companies...

ST. PETERSBURG, Fla. (AP) — A federal judge on Friday ruled for Florida in a lawsuit challenging a U.S. Centers for Disease Control and Prevention order making it difficult for cruise ships to resume sailing due to the coronavirus pandemic. U.S. District Judge Steven Merryday wrote in a 124-page decision...

Republicans point to inflation in bid to retake Congress. WASHINGTON (AP) — Gas prices have soared passed $3 per gallon. The costs of used cars and new furniture, airline tickets, department store blouses, beef and a burrito at Chipotle are all on the rise, too. Economists say the price increases are fueled by the aftereffects of a global pandemic and probably won’t last. But Republicans are hoping to storm into next year’s midterm elections arguing that key parts of the economy have deteriorated under President Joe Biden and a Democratic-controlled Congress. They say steep government spending has triggered inflation and that’s hurt the purchasing power of everyday Americans rather than triggering a promised boom.

Land from former slave market donated to US park service

NATCHEZ, Miss. (AP) — The National Park Service on Friday accepted a Mississippi city’s donation of land at a site that was once one of the largest slave markets in the United States. The federal agency eventually will develop exhibits that tell the history of Forks of the Road, where...

HANA, Hawaii (AP) — Some people who live in east Maui say the famed Road to Hana is becoming a gridlocked maze of illegally parked cars driven by tourists. Residents are asking for state and county help to address the traffic and parking problem, Hawaii News Now reported Thursday. Maui...

COLUMBUS, Ohio (AP) — Congress and President Joe Biden acted with unusual swiftness this week in approving Juneteenth as a national holiday. That shifted the battle to the states, where the holiday faces a far less enthusiastic response. Nearly all states recognize Juneteenth in some fashion, at least on paper....

ALBUQUERQUE, N.M. (AP) — One of New Mexico’s largest drinking water providers has stopped pulling from the Rio Grande to help prevent the stretch of the river that runs through Albuquerque from going dry this summer. The curtailment that went into effect Friday came about two weeks earlier than last...

TRAVERSE CITY, Mich. (AP) — Organizers of a popular festival in northern Michigan that was shut down last year due to the coronavirus pandemic are encouraging people attending this summer to receive free COVID-19 vaccinations on-site. Masks will not be required at the 95th National Cherry Festival scheduled July 3-10...

Increase in the number of homes for sale in San Francisco

It is a truth universally acknowledged that housing prices in San Francisco are staggeringly high, add to that, a high cost of living and buying a house is pretty much out-of-reach for many residents.