InsideTheRangers is a FanNation channel dedicated to covering the Texas Rangers

By Matthew Postins
Posted by
InsideTheRangers
2021-05-03 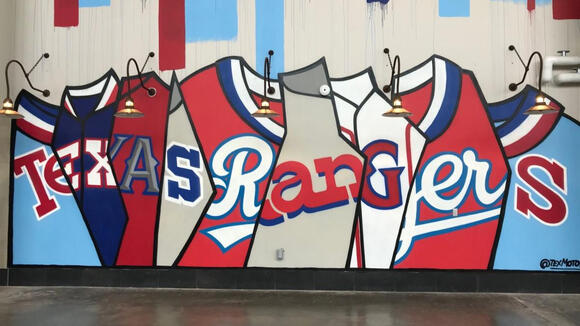 On this date in Texas Rangers history, Pat Putnam hit a walk-off home run to lead the Rangers to a 9-8, 10-inning win over the Kansas City Royals at Arlington Stadium.

The game, played on May 3, 1981, saw just 12,974 fans go through the turnstiles. But they got to see an exciting game, punctuated by Putnam’s heroics.

Putnam hit seventh in that game, going 2-for-4 with two runs scored and 2 RBI. Putnam drove in a run on a double off Royals reliever Dan Quisenberry. His game-winning home run, which was his second home run of the season, came off Royals reliever Juan Berenguer as he led off the bottom of the 10th inning. Putnam deposited the homer over the right field fence.

Putnam, a native of Bethel, Vermont, spent most of his career with the Rangers. He was fourth in American League Rookie of the Year voting in 1979, when he hit a career-high .277 in his first full season in the Majors. He also hit 18 home runs and drove in 64 runs.

Putnam made his MLB debut in 1977 and played with the Rangers through the 1982 season. In 1983, Putnam moved on to the Seattle Mariners, and spent 64 games in 1984 with the Mariners before playing his final 14 games with the Minnesota Twins.

Are we missing a moment from this day in Texas Rangers history? We’re happy to add it. Hit us up on Twitter @PostinsPostcard and let us know what to add.

InsideTheRangers is a FanNation channel dedicated to covering the Texas Rangers

The Texas Rangers snapped their 16-game road losing streak on Saturday, giving the Los Angeles Dodgers a receipt for their butt-kicking on Friday. The Rangers emphatically avoided a 17th straight road loss, blowing out the Dodgers by a score of 12-1, just one night after getting blown out by the same score. In a reversal of the previous night, Kolby Allard turned in a spectacular start, holding the potent Dodgers lineup off the board for five innings.

ARLINGTON, Texas — Texas Rangers starting pitcher Kohei Arihara will need shoulder surgery due to repair an aneurysm that was found this week by the club's medical staff. The procedure, which is a repair of the posterior circumflex humeral artery aneurysm, is scheduled to be performed on May 27 by vascular surgeon Dr. Gregory Pearl in Dallas.

ARLINGTON, Texas — For the first time since 2016, the Texas Rangers have swept the Houston Astros in a three-game series in Arlington. And if you had to guess who the hero was, yes, it was Adolis García yet again. It was only fitting that the guy who's walk-up song is "Blinding Lights" by The Weeknd would cap off an already impressive weekend with another big hit.

Much of the anticipation around the Texas Rangers picking second overall in this summer's First-Year Player Draft has involved the same three names:. Vanderbilt ace Kumar Rocker, his rotation accomplice Jack Leiter, or Dallas Jesuit's Jordan Lawlar, who may be the premiere position player in this year's class. However, in...

After sweeping the Houston Astros, Hyeon-jong Yang and the Texas Rangers were hit hard in Anaheim. The Los Angeles Angels drubbed the Rangers by a score of 11-5, killing nearly all the momentum the Rangers carried with them after such a great weekend. Yang gave up seven earned runs in...

Rangers History Today: Another Look Back at 'Sele and Helling Take the Shelling'

On this date in Texas Rangers history, Aaron Sele won his eighth game of the 1998 season, as he put together one of the best seasons of any Rangers pitcher in team history. On May 23, 1998, Sele threw a complete game victory over the Kansas City Royals, 7-3. Sele gave up eight hits and three runs (two earned), while striking out nine and walking none. The Rangers gave him more than enough run support, as Bill Haselman drove in two runs in a 2-for-3 game.

The Texas Rangers refuse to give up. With 13 comeback victories on the season, they've proven that time and time again. But they can't come back all the time. The Rangers fought hard to climb out of a 9-1 hole, but fell short in a 9-8 defeat at the hands of the Los Angeles Angels.

ARLINGTON, Texas — Texas Rangers shortstop prospect Chris Seise has suffered yet another major injury. Seise sustained a torn ACL in his right knee during a defensive play in the 10th inning of High-A Hickory's game against Greensboro on Wednesday. An MRI revealed the extent of the damage. Once the...

We've beaten the dead horse in our coverage of the Texas Rangers this year: 2021 is all about growth and development. It's paramount, not only for future seasons, but even getting through this one. One key aspect of the "growth and development" is keeping players healthy, specifically the pitching staff....

Despite an increased effort on Friday night, the Texas Rangers failed to get back into the win column on the road, losing to the Seattle Mariners by a score of 3-2. It was theRangers' 10th straight loss on the road. You have to go back to May 6 to find their last win away from Arlington, which is enough time to get both doses of the Pfizer or Moderna COVID-19 vaccine.

On this date in Texas Rangers history, Toby Harrah completed a team-record 41 straight games reaching base as the Rangers defeated the Boston Red Sox at Fenway Park. On May 31, 1985, Harrah hit leadoff for the Rangers and went 3-for-5 while driving in a run. Harrah’s streak started on...

The Texas Rangers are reeling right now. They have an off day on Monday, and it couldn't come at a better time. "I've talked about it before, where I don't love off days," said Rangers manager Chris Woodward. "This is clearly one where we need it. We need to kind of reset and head into Colorado with a little bit more positivity as far as the outcomes."

With another loss to the Seattle Mariners, the Texas Rangers are on the verge of tying a franchise record they'd rather keep in the past. Saturday's 3-2 defeat not only extended the Rangers' current losing streak to five games, but it was also the 11th straight loss on the road, which is just one game shy of the franchise record set in 2003.

The Texas Rangers begin a three-game series in Colorado, hoping to snap a 12-game losing streak on the road.

By this point, Joey Gallo is more than used to trade rumors. And as the Texas Rangers continue to fall further and further back in the standings, those rumors will likely heat up once again. Regardless of where the Rangers are in the standings, Gallo is sure to be a...

Rangers' García Earns Multiple Awards For Huge Performance in May

Texas Rangers rookie sensation Adolis García has been named the American League Rookie of the Month for May, the first Texas player to win the league’s monthly rookie honors since Nomar Mazara in May 2016. This is just the ninth time a Texas player won the award since it was...

As the Texas Rangers fall further in the standings, and as the baseball season inches closer to the trade deadline, trade rumors will continue to intensify. In all likelihood, the most sought-after name on the Rangers will be Joey Gallo. His power, plate patience, and elite defense in right field make him a hot commodity for contending teams who are looking to lengthen their lineup.

With Eyes On Future, Rangers Designate Khris Davis For Assignment

ARLINGTON, Texas — The Texas Rangers have cut ties with veteran slugger Khris Davis, designating him for assignment. Taking his place on the active roster is Eli White, who was recalled from Triple-A Round Rock on Tuesday. The move leaves a vacancy on the club's 40-man roster. Rangers general manager...