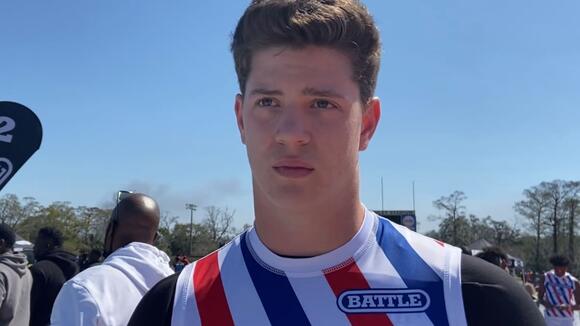 Brownsburg (Ind.) --Elite 11 provided Louisiana native Eli Holstein an opportunity to make a national name for himself, and he provided plenty of reason for people to now know why he’s one of the best 2023 quarterbacks in the country.

Elite 11 confirmed Holstein’s 38-inch vertical leap and 4.69 40-yard dash as he measured in at 6-foot-3, 212-pounds. Most importantly, his physical gifts go well beyond throwing the football. This is a young man that certainly shined when throwing from the pocketbut his testing results helped to affirm Holstein’s ability to throw money passes while throwing against his body.

Even more impressive, Holstein was able to drive the football through a gusty wind that was present all day long. His legs were the key regardless of the situation.

Not every player possesses the natural arm strength of Holstein. His arm strength matches his size very well. Whether throwing with or without the wind, Holstein’s arm allows him to throw into smaller windows than other quarterbacks. It’s not just upper-body strength either.

Holstein powers the football through his lower body, especially his hips, a key component of a quality signal caller. Holstein “catapults” the football forward, if one will, in terms of over-the-top throwing motion and the velocity that follows. Think of Holstein as possessing a fastball that keeps batters on guard. That’s also why his lower body allows him to possess balanced mechanics that allow him to make other types of throws.

Holstein showed the ability to throw a “level two” ball, i.e. a pass with some loft to get over the linebacker or cornerback, but touch down in the wide receiver’s hands before the safety would be able to reach the wide receiver.

When combined with Holstein’s arm strength, this is an impressive dual combination. Most power throwers, high school signal callers in particular, struggle with touch. After watching Holstein throw during the Indianapolis Elite 11, there’s no question he’s been coached quite well to this point about how and when to utilize a touch pass. One final area catches one’s attention, and that’s movement skills.

Holstein On The Run

There are different types of mobile quarterbacks. Some of them simply run because they are not that accurate, while others create wide-open wide receivers with the use of their legs. Holstein would be the latter. He’s certainly a quality pocket quarterback, and his pocket passes are already being complemented with roll-out and sprint-out passes. There is a major difference with Holstein on the move as compared to most signal callers, however.

From everyone at the Elite 11, he was probably the best at keeping his on-the-move mechanics as close to the same as his pocket-mechanics. That’s a big-time accomplishment, especially for a young man that did not yet take a snap during his junior season.

Also of note, Holstein’s arm strength still stood out while moving right or left. That just needed to be stated for the record, as he continually powered through the football with a tight spiral even when outside the pocket. His ability to continue to learn the position is his final stepping stone.

Holstein is a big-armed passer with raw athleticism to make plays outside the pocket as well. He’s a national recruit for a reason and Elite 11 helped to ensure he’s one of the top rated players in the class of 2023 regardless of position.

LSU is one of several programs giving chase to Holstein, and he could be a central cog in LSU’s 2023 recruiting class. It will be interesting to see which quarterback(s) LSU really goes after with so many in-state possibilities available.

Saints crushed for not naming Jameis Winston as their starting quarterback

The biggest storyline with the New Orleans Saints this offseason is their quarterback situation, which isn’t something they’ve been able to say for quite some time. The job is between former No. 1 overall pick Jameis Winston and offensive weapon Taysom Hill with Winston being the favorite to land the job.

LSU continues to add experience to its coaching staff as the Tigers have reportedly hired long time NFL coach Kyle Caskey as an offensive analyst. The news, reported by The Athletic's Brody Miller, comes as the purple and gold set their sights on welcoming the team to campus on May 24.

As the NFL season approaches, LSU continues their dominance of Tigers succeeding at the next level. With an array of talent in the NFL already, there are many under the radar Tigers due for a breakout season. With highly touted players such as Joe Burrow, Tyrann Mathieu and Odell Beckham...

Alabama football has landed another top running back in the class of 2022 — this time from a rival's backyard. Le'Veon Moss, a 6-foot, 190-pound prospect from Istrouma High in Baton Rouge, La., announced he has committed to the Crimson Tide on Sunday evening. Moss, the No. 6 running back in the nation by the 247Sports Composite, is Alabama's seventh commitment and first since defensive lineman Jaheim Oatis committed in April.

Since being drafted in 2019 and 2020 respectively, LSU linebacker Devin White and receiver Justin Jefferson have come in to the NFL as borderline stars and only proved it time and time again in their first few seasons in the league. In two seasons with the Buccaneers, White has proven...

TJ Finley didnt want to take too long to make his college decision and on Monday the former Tigers' quarterback announced he'd be transferring to Auburn. In order to give himself time this summer to adjust to his new school and also get to work with some of his teammates, Finley wanted to make an informed but quick decision. Heading into the highly anticipated decision, Finley was reportedly considering four schools: Alabama, Auburn, Penn State and Houston.

LSU Football Newcomers Who Could Potentially Start Week One for Tigers

It was move in week for a number of prominent freshmen and transfer players who hope to help contribute to the 2021 LSU roster. Over the next several days the players will truly be introduced to the program via workouts and position group meetings to start learning the schemes. With...

Missed opportunites has been a constant theme for this LSU team all season and it popped up in a big way against Gerogia. The Tigers left eight batters on base and struck out 11 times in a 4-1 loss to the Bulldogs in a single elimination matchup. It's the first...

Ma'Khail Hilliard knew that final game in Alex Box Stadium would mean a great deal to him. The senior has been through the ultimate highs and lows throughout his career at LSU. He started as a freshman, becoming one of the more exciting young pitchers in the SEC with one...

As players start reporting to campus for summer workouts and classes, it's really the final period for those in the transfer portal to start winding down their recruitment decisions. LSU and Aubrun fans saw it last week when quarterback TJ Finley announced his commitment to Auburn after taking less than a month to weigh his transfer options.

The month of June is expected to be an absolute rush of commitments, visits and overall chaos in the recruiting world. For the first time in over a year, recruiting restrictions will be lifted by the NCAA, allowing high school athletes to visit college campuses and participate in camps. While...

LSU has positioned itself with one of the best offensive skill position classes in the country. Heading into the month of June with all the official visits that will happen, it’s important to remember the recruits already on the LSU commitment list. LSU’s 2022 recruiting class is truly loaded. The...

As one of the leaders of the Cincinnati Bengals, Joe Burrow wanted to be at OTA's to interact with his new and old teammates. Burrow knows better than most the importance of building that chemistry with the offense as soon as possible. With the second year NFL quarterback still rehabbing...

LSU is expecting great improvement from its .500 season in 2020 and the odds are in favor of a Tigers rebound season as well. According to the latest projections out of BetOnline, the purple and gold wins are set at 8.5 entering the 2021 offseason. With a traditional 12-game schedule...

Why June Will Be One of Craziest Recruiting Months for LSU, College Football in Recent Memory

It will be a wild month of June for LSU fans and SEC fans in general. After a long hiatus, official visits will be in full swing and be a major factor in deciding the SEC recruiting leaders. Welcome to the unknown. Recruits that have been waiting and waiting to...

Joe Burrow is bad at being patient. As an ultra competitive individual, the former LSU quarterback always wants to push himself in everything he does, which is why he's had moments of impatience throughout his recovery from a torn ACL during his rookie season. But now that he's reached the...

Gavin Dugas looked like he could barely breathe when Drew Bianco's knee connected with his ribs on Friday evening. He had to leave the game and head for the emergency room with his parents to get x-rays, which would eventually come back negative. Bruised ribs and all, Dugas was able...

LSU Coach Ed Orgeron has been on a recruiting tear over the last few months with numerous transfers taking their talents to Death Valley along with a strong recruiting class coming in. Orgeron joined 104.5 ESPN Baton Rouge for his weekly appearance on Off The Bench where he discussed the impressions of these new faces finally getting to campus.

Arlington (TX) Seguin High School 2022 wide receiver/defensive back and Kansas commit Xavion Brice‍ will be visiting Baylor on Saturday after he finishes camping at Texas. The Baylor staff has just started to build a relationship with him over this past week after he measured in at 6-foot-1, 175 pounds and ran a laser-timed 4.47 40 at the SMU camp over the weekend. The goal was to get him on campus as quickly as possible which is what they are going to be able to do this weekend.