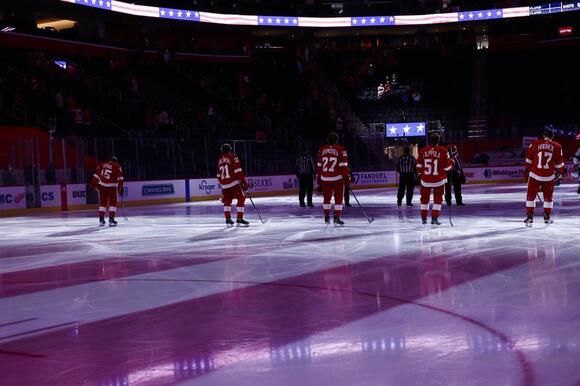 EditorsNote: 7th graf, add ‘for’ before ‘his sixth goal’

Blake Coleman tallied a goal and an assist and goaltender Christopher Gibson won for the first time in more than three years as the Tampa Bay Lightning claimed a 2-1 road win over the Detroit Red Wings on Sunday afternoon.

Mikhail Sergachev also scored for the Lightning (35-14-3, 73 points), who moved up to second place in the top-heavy Central Division. The Lightning are tied with the Florida Panthers but have played one fewer game. Both teams are two points back of the first-place Carolina Hurricanes.

Gibson, Tampa Bay’s third-string goalie, made 22 saves to earn his first NHL victory since March 20, 2018, while a member of the New York Islanders.

Filip Zadina scored the lone goal for the Red Wings (18-27-9, 45 points), who received an outstanding 40-save performance from goaltender Jonathan Bernier to give them a chance for consecutive wins over the defending Stanley Cup champions.

After being blanked by the Red Wings in a 1-0 shootout the day before, the Lightning were looking for a quick strike and received it when Coleman opened the scoring 16 seconds into the affair. Barclay Goodrow intercepted Filip Hronek’s pass attempt at the end boards and sent the puck to the slot for Coleman to convert with a quick one-timer for his 13th goal of the season.

Despite dominating play in the opening frame to the tune of a 19-6 shot margin, the Lightning didn’t double the lead until Sergachev collected his third goal of the season 69 seconds into the second period. With a screen in front, his long wrister from the point found the mark.

The Red Wings, long eliminated from playoff contention, hung tough and were rewarded when Zadina put them on the board. Seconds after Bernier made an excellent save, Zadina joined a four-on-two rush and completed a give-and-go with Vladislav Namestnikov before burying the shot in the net for his sixth goal of the campaign.

Detroit had a golden chance to draw even when the Lightning found themselves in penalty trouble in the third period, with three successive infractions that gave the Red Wings more than two minutes of a five-on-three advantage. However, the hosts couldn’t convert during the series of power plays.

The Buffalo Sabres have lowered the asking price on Jack Eichel. I gathered back in late June that GM Kevyn Adams was trying to generate more interest in his injured and disgruntled star, and now Elliotte Friedman is confirming that in his latest podcast. It’s the first real sign that...

2:55 p.m. - The Bruins are reportedly signing a pair of bottom-six forwards in Erik Haula and Tomas Nosek. Read more about them and the signings here:. 2:05 p.m. - The Canadiens, as expected, have lost their No. 2 center, with Phillip Danault heading to the Kings on a six-year deal.

The Tampa Bay Lightning have signed free agent forward Pierre-Edouard Bellemare to a two-year contract. The contract will carry a $1 million cap hit. The Lightning have already made a number of moves today, including bringing back defenseman Zach Bogosian who is expected to be on the NHL roster, and a bunch of depth players for the Syracuse Crunch. In signing Bellemare, the Lightning are adding a very solid piece to their bottom six.

We told you the next week leading up to the 2021 NHL Draft was going to be a busy one and the fun has started. According the Detroit Red Wings, they have made a trade with the New York Islanders. The Red Wings have acquired D Nick Leddy from the...

The Detroit Red Wings have brought a former prospect back into the organization. They announced the signing of defenseman Dan Renouf today to a one-year contract. PuckPedia reports it’s a two-way deal, carrying an $850,000 cap hit with a $325,000 salary at the minor level and $375,000 guaranteed. Renouf re-joins...

The Detroit Red Wings are working through the final touches of their roster as free agency unfolds. One of the bigger names to keep an eye on in free agency is defenseman Dougie Hamilton, an unrestricted free agent. Hamilton is arguably the best defenseman on the free-agent market this offseason....

What do the 2021-22 Tampa Bay Lightning look like without Gourde and Johnson?

Yanni Gourde is off to the Seattle Kraken and Tyler Johnson was just traded to Chicago, meaning the Tampa Bay Lightning are capable of icing a cap-legal team for next year. And just for the record, they were able to last year, Panthers/Canes/Islanders/Canadiens fans. Surprisingly, the top six, top four,...

Blake Coleman #20, Tampa Bay Lightning Mandatory Credit: Sam Navarro-USA TODAY Sports. With free agency set to begin this Wednesday, it is becoming clearer and clearer that pending unrestricted free agents are unlikely to sign with their former teams and will instead test the market. There is the odd exception to that of course, as a player like Gabriel Landeskog is still in heavy talks with the Colorado Avalanche and may very well re-sign there, but for the most part, these pending unrestricted free agents will dawn different jerseys for the 2021-22 season.

(Photo by Christian Petersen/Getty Images) The New Jersey Devils might make some more moves over the next week. Dougie Hamilton is the big free agent that fans want to see them land but there are some other transactions to be made as well. One of them could be the signing of Blake Coleman. Of course, the man known as “pickles” around these parts used to play for the New Jersey Devils before being traded to the Tampa Bay Lightning. Since that move, Coleman and the Lightning have won back-to-back Stanley Cups.

The Calgary Flames have reportedly made their big signing of free agency, adding forward Blake Coleman on a 6 year $4.9M AAV contract. There is no word yet on any NMC or NTC clauses. Coleman was most recently a member of the Tampa Bay Lightning, winning the Stanley Cup in each of the last two seasons.

On the Rangers and Casey Cizikas, Blake Coleman – it doesn’t make sense

While there is nothing concrete or even rumored connecting the Rangers to Casey Cizikas, Blake Coleman, or other big name depth signings, there is always that fear that the Rangers will do something stupid. With the move toward grit and defined roles, that fear is compounded. Barclay Goodrow was overpaid, even if extremely useful, the draft was a minor shift in philosophy, and there is still no transparent plan that we can identify. It doesn’t mean there isn’t a plan, it just means we don’t know it yet, or it might be a bad plan.

A lot of the Blake Coleman-Bruins rumors started heating up in the last 24 hours or so, but it appears the veteran winger will not be heading to Boston. Coleman, one of the top free agents on the market, is heading to the Calgary Flames, according to former Bruin Jimmy Hayes. Per Hayes, the deal is for six years and carries a $4.9 million annual cap hit. The Athletic’s Pierre LeBrun also confirmed the news.

The Carolina Hurricanes don’t have a goalie. With the team’s trade of Alex Nedeljkovic to the Detroit Red Wings last week, it looks like the Canes will enter the beginning of free agency Wednesday morning without a reliable starter or a backup for the NHL roster. While the Canes did...

Acquired from the New Jersey Devils shortly before the COVID-19 pandemic put the entire world on pause, winger Blake Coleman is entering the free agent market after back-to-back Stanley Cup wins with the Tampa Bay Lightning. And if Sportsnet’s Elliotte Friedman is on the right path here, Coleman is about...

After the surprise of not being extended a qualifying offer from the Chicago Blackhawks, Pius Suter has found a home with their historical arch-rivals. The Detroit Red Wings have announced a two-year contract for Suter, who recorded 27 points in 55 games as a rookie this season. Suter will earn $6.5MM total over the two years, his agent reveals on Twitter.

Zadorov traded to Flames by Blackhawks

The start of NHL Free Agency begins on Wednesday, July 28th (an hour away as I type this), and the Buffalo Sabres should stay busy over the next 24-48 hours and beyond; especially considering they still are exploring trade offers for captain Jack Eichel. It may have been a surprise...

The Buffalo Sabres continue to try to move disgruntled forward Jack Eichel. They're not letting him go for free though obviously and are standing firm of their price of 4 1st round picks or a mix of players, picks and prospects that would be the equivalent. Two teams seem to...

There will be plenty of goalie movement with the opening the NHL free agent market. The Maple Leafs and Hurricanes got the ball rolling by swapping netminders, while the Canucks signed a veteran backup for Thatcher Demko. The Maple Leafs will pair Petr Mrazek with Jack Campbell in their net...