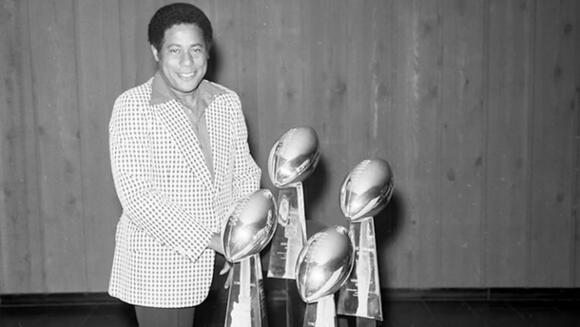 PITTSBURGH, PA — The Pro Football Hall of Fame inducted several members posthumously on April 28, in a ceremony that aired on NFL Network on May 1 after the 2021 NFL Draft was completed.

Among those enshrined was a contributor and super scout, Bill Nunn. Nunn is the first black contributor to be inducted into the Pro Football Hall of Fame.

As part of the ceremony and the show, the family of Bill Nunn not only unveiled his bronze bust, they also were placed the bust on the display in the Hall of Fame Gallery inside of the museum.

Nunn was a legendary figure who opened the door for players from historically black colleges and universities who previously hadn’t received attention in the draft.

Nunn was a trailblazer, and his impact forever changed the NFL. Nunn’s path to the Steelers included a very successful career in the newspaper business. He was a sportswriter, then sports editor, and eventually the managing editor of the Pittsburgh Courier.

Nearly 20 years before joining the Steelers, he was responsible for selecting the Courier’s annual Black College All-American team.

He joined the Steelers on a part-time basis in 1967 and took a full-time position two years later when Chuck Noll was hired as head coach. The draft picks and player signings of the Nunn era were legendary, including the likes of Joe Greene, LC Greenwood, Mel Blount, John Stallworth and Donnie Shell.

Nunn’s vision changed the scouting game, impacting the Steelers and the entire NFL in a profound way.

Unbeaten Dolphins kick off Week 4 as underdogs vs Bengals

Tua Tagovailoa and the unbeaten Miami Dolphins are underdogs in Week 4. The Dolphins (3-0) kick off this week’s schedule against Joe Burrow and the Cincinnati Bengals (1-2) on "Thursday Night Football." The Bengals are 3 1/2-point favorites, according to FanDuel Sportsbook. If a victory over the Buffalo Bills...
CINCINNATI, OH・4 HOURS AGO
WPXI Pittsburgh

BEREA, Ohio — (AP) — For the first time, the Cleveland Browns didn't mind that Myles Garrett wasn't with them on the field. The All-Pro defensive end stayed home to rest and recover Wednesday from injuries suffered in a single-car crash as his status for the Browns' game on Sunday at Atlanta remains in doubt.
CLEVELAND, OH・1 HOUR AGO
WPXI Pittsburgh

Belichick: Hoyer will start if Jones can't play vs. Packers

FOXBOROUGH, Mass. — (AP) — If Mac Jones can't play Sunday for the Patriots visit to Green Bay, veteran backup quarterback Brian Hoyer will start in his place. But Bill Belichick is still leaving open the possibility that his second-year quarterback will be ready to go. That's about...
GREEN BAY, WI・3 HOURS AGO
WPXI Pittsburgh

Fantasy Football Six-Pack: One number explains how Lamar Jackson is breaking the game

Let's take another shot at deciphering a few things about a generally indecipherable league. Here are six fantasy football relevant stats to help you better understand the NFL as we head into Week 4 ... 85.4 - With three games in the books, Lamar Jackson has accounted for an astonishing...
BALTIMORE, MD・5 HOURS AGO

The AFC West is not what we thought it was. Here's how things have gone wrong for the hyped division

There are no guarantees in the NFL. Prime example: The AFC West. Pegged almost universally as the best division in the NFL, the AFC West is failing to live up to the preseason hype while posting a collective 5-7 record through the season's first three weeks. By contrast, the NFC East (8-4) is off to a markedly better start.
NFL・3 HOURS AGO
WPXI Pittsburgh

Zach Wilson cleared from injury, set to return for Jets vs. Steelers this week

We can finally start to get a look at the strides Zach Wilson has made in his second season. The New York Jets quarterback, who injured his knee in the preseason, has been cleared and assuming no setbacks, he'll start Sunday against the Pittsburgh Steelers. Jets coach Robert Saleh announced that news Wednesday.
PITTSBURGH, PA・5 HOURS AGO
WPXI Pittsburgh

Wilson cleared by doctors, will start for Jets at Pittsburgh

FLORHAM PARK, N.J. — (AP) — Zach Wilson is back under center for the New York Jets. Coach Robert Saleh announced Wednesday the second-year quarterback will make his season debut at Pittsburgh on Sunday “if all goes well this week” at practice, six weeks after having knee surgery.
NFL・5 HOURS AGO
WPXI Pittsburgh

Most of my fantasy football seasons have the same shape, and it looks like 2022 is going to follow the same path, hopefully:. I have a bunch of teams in the middle of the standings right now. I’ve been right on some things, but I try not to be a Victory Lap guy. Today’s article is going to focus on things I got wrong and opportunities I missed, and see if there’s a learning point to it all.
NFL・3 HOURS AGO

The Tampa Bay Buccaneers, who moved their football operations to South Florida to avoid Hurricane Ian, remain hopeful of being able to return home to play the Kansas City Chiefs on Sunday night. The team practiced at the Miami Dolphins' training facility on Wednesday, describing the experience as different, but...
TAMPA, FL・1 HOUR AGO
WPXI Pittsburgh

Bill Belichick isn't discussing Mac Jones' injury: 'What do I look like, a doctor?'

On good days, Bill Belichick doesn't like discussing injuries. These are not the best of days for the New England Patriots. They're 1-2. Their offense has been a struggle. And they'll presumably be without quarterback Mac Jones this week. We need to add "presumably" because Belichick isn't saying. He won't...
NFL・3 HOURS AGO
WPXI Pittsburgh

Chargers place pass rusher Joey Bosa on injured reserve, but he could return this season