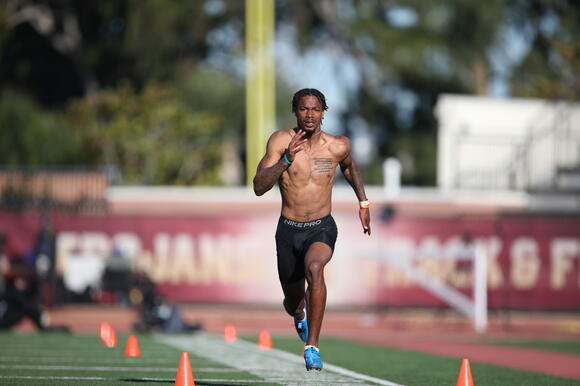 The California native confirmed the news himself on twitter, writing, "on a mission, Let’s go!!!"

Vaughns did not get drafted in Rounds 1 - 7 of the 2021 NFL Draft, the Colts signed him as an undrafted free agent.

According to Joel A. Erickson, IndyStar reporter, the team gave Vaughns a $22,000 signing bonus.

Vaughns spent five seasons with the USC Trojans after redshirting back in 2016. He was highly productive for USC, totaling 222 passes for 2,801 yards and 20 touchdowns in his career.

The 6-2, 190-pound wideout started at wide receiver for the Trojans in 2020. He also contributed significantly on special teams with punt returns. Last season he returned 3 punts for 13 yards.

Teams often clamor for traits and upside early on in the NFL Draft, ignoring the floor/baseline for prospects. Other times, you have the opportunity to select players like Vaughns, who defines the saying “jack of all trades, master of none”. The former 5-star recruit and California native has been the model of consistency throughout his time at USC.

His freshman campaign he was very productive with a 57-809-5 receiving line, followed that up with a 58-674-6 line as a sophomore, then last season caught 74 passes for 912 yards and six scores as USC’s third receiver behind Michael Pittman Jr. and Amon-St. Brown. Primarily a Z, Vaughns plays the sideline very well and displays crisp route-running and fluid movement skills.

When running vertical routes his separation skills are extremely solid as well, and he has excellent awareness as well. Despite being over six feet tall, Vaughns isn’t quite the contested-catch weapon that could be used as a red zone threat. His hands have also been a smidge inconsistent, primarily during 2019.

Regardless, even in a loaded 2021 wide receiver class, Vaughns has all of the makings of a mid-round, possibly Day Two pick, with his game-to-game consistency and translatable traits. He could easily have a decade-long career as an NFL team’s WR3.

The 24-year-old quarterback is still being evaluated for head and neck injuries he sustained against the Bengals Thursday night.
NFL・20 MINUTES AGO
AllTrojans

Caleb Williams will have an embarrassment of riches next season. Led by the nation's No. 1 wide receiver, Zachariah Branch, the USC Trojans football program has already secured commitments from three of the top Class of 2023 wide receivers in the country.  SBLive Sports Director of Recruiting ...
LOS ANGELES, CA・1 DAY AGO
AllTrojans

USC freshman basketball player Vince Iwuchukwu has been sidelined indefinitely after suffering cardiac arrest during a workout in July, according to CBS Sports' Matt Norlander. In a statement Iwuchukwu wrote to CBS Sports, he said he has been receiving "optimal care" since the incident ...
LOS ANGELES, CA・20 HOURS AGO
Wildcats Today

Here's what we expect when the Buckeyes and Scarlet Knights meet on Saturday afternoon in Columbus.
COLUMBUS, OH・24 MINUTES AGO
AllTrojans

Defense and the running game. Those aren't exactly the two things Lincoln Riley's teams have been known for over the years, but that has been the winning formula for the 2022 USC Trojans (4-0, 2-0). Look no further than last week against Oregon State when the Trojans picked off four passes and ran ...
LOS ANGELES, CA・18 HOURS AGO