Indiana Baseball: Hoosiers Bounce Back, Rout Iowa 12-6 to Even Series 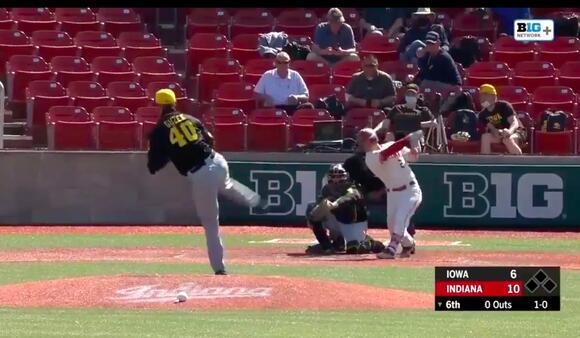 BLOOMINGTON, Ind. – It's regular season baseball, so saying that Indiana's game with Iowa on Saturday landed in that ''must win'' category would be overstating it a bit. But it sure helped that the Hoosiers came away with a 12-6 victory over the Hawkeyes to even the series.

Indiana (19-9) scored five runs in the first inning, and all nine starters had at least one hit. They also played an error-free game, which was nice after three miscues Friday night cost them in one-run loss.

It was just their second win all year against a team with a winning record in the Big Ten, and their first since the opening weekend. Indiana is 2-6 against teams over .500 and 17-3 against the bottom of the league.

The five runs right off the bat was huge.

"I think that gave us a lot of confidence, and we were ready to go from there,'' Indiana third baseman Cole Barr said. "We scored several runs in several innings. We just had to play some better baseball today. We kept leaning on them and we broke out.''

Second baseman Paul Toetz had three hits for the Hoosiers, and four others – center fielder Grant Richardson, third baseman Cole Barr, designated hitter Tyler Van Pelt and first baseman Kip Fougerousse – all had two hits each. The Hoosiers had 14 hits, including five doubles and a solo home run by Barr.

"I think momentum can definitely be a factor because it compounds the pressure on the pitcher,'' Van Pelt said. "It helps when everybody's hitting. A lot of guys were hitting balls hard and we're a good base-running team.''

Mercer has stayed with this same lineup for two weeks now, and he's getting production from top to bottom. That's a nice thing to see on the first day of May

"This is usually about the time you settle in with a lineup, but you don't know what you don't know in real time,'' Mercer said. "To be honest with you, me missing time (with COVID-19) stunted the growth of those guys, and I take full responsibility for that. "We are getting a lot better offensively, and it's starting to show, ever since the Illinois series (four weeks ago).

"All the things that aren't sexy, aren't fun, aren't Twitter highlights, those things are part of the offense too. So for those guys to see what wins games with a productive overall offense, you see it. One guy has to trust the guy behind to drive in a run if you move a guy over to third with a groundout to the right side with two strikes. That's a good at-bat, and we're doing more of that.''

Despite the early five-spot and a dozen runs, this still wasn't the easiest of wins. Starter McCade Brown struggled with his control, and the Hawkeyes were back in the game quickly. He walked four batters in the second inning alone, where the Hawkeyes scored three runs.

Indiana answered with three run of its own in the bottom of the second, and when Brown struggled again in the third, he got the quick hook, lasting a season-low 2 2/3 innings, and allowing five runs on six hits and five walks.

"We have great confidence in those guys. During the course of the season, you're going to have good days and bad days. Just because one or two days doesn't make a season with the offense, it's the same with the pitchers. They're going to be better and I have 100 percent confidence in that.''

Indiana's bullpen, which has been great all year, picked him up. John Modugno (2-1) pitched 2 1/3 innings, allowing just one run to pick up the win, and lefty Ty Bothwell got the save, throwing four innings of shutout ball, striking out five and allowing just two hits. It was the first save of his career.

"Those (bullpen) guys are outstanding. You have to coach every player. A couple of years ago, Ty Bothwell was nothing of the player he is now, but you keep coaching him hard and someday he's going to help us. Today was that day. He's an important pitcher for us, and he gives us the depth to need, and you can trust that.

"It was huge to (end the game with just Modugno and Bothwell) so now tomorrow we've got guys who haven't thrown yet and the guys from Friday can come back, too.''

The two teams are back at it on Sunday at Bart Kaufman Field, with the game starting at Noon ET. It's the best pitching matchup of the weekend, with Indiana's Gabe Bierman taking on Iowa left Cam Baumann. Due to COVID protocols, no fans are allowed outside of family.

Way-Too-Early Joe Lunardi ESPN Bracket Has Indiana as No. 9 Seed in 2022 Tourney

There's still five months to go before the college basketball season even starts, and March Madness is a long nine months away. But that hasn't stopped ESPN bracketologist Joe Lunardi from putting together his field of 68 on Wednesday. Indiana is in his field, which is probably a compliment considering...

The Illinois football program announced the kickoff time for the first Big Ten matchup of the season against Nebraska. The two Big Ten West programs will face off on Aug. 28 at 12 p.m. CT at Memorial Stadium in Champaign, Illinois, to mark the beginning of the college football season.

OMAHA, Neb. – The NCAA baseball tournament started with 64 teams, and now we're down to eight as the college baseball world returns to Omaha for the first time in two very long years. Vanderbilt is back to defend its 2019 title in Omaha; there was no tournament a year...

INDIANAPOLIS, Ind. – The Marion County Prosecutor's Office announced on Thursday that two more people have been charged with the murder of popular former Indiana football player Chris Beaty. Beaty, an Indianapolis native who went to Cathedral High School and played football at Indiana from 2000 to 2003, was killed...

Former five-star defensive back Tyreke Johnson transfers from Ohio State to Nebraska, Luka Garza is in "the best shape of his life" ahead of the NBA Draft and former Buckeye linebacker Jerome Baker signs a contract extension in Miami. Here's the latest from around the Big Ten Conference.

OWENSBORO, Ky. – There's a lot that comes with being Indiana's Mr. Basketball, and Caleb Furst knows that all too well. It's an award that lives in infamy, along with wearing that No. 1 jersey in the All-Star games against Kentucky. But for the Purdue signee from Blackhawk Christian, being...

Former Ohio State quarterbacks Braxton Miller and Troy Smith lead a group that is attempting to bid a purchase to the campus of Urbana University in Urbana, Ohio. They plan to turn it into a prep school similar to IMG Academy in Bradenton, Florida. “My uncle, Paul, reached out to...

BROWNSBURG, Ind. – C.J. Gunn, a junior at Lawrence North who is the lone commitment thus far to Indiana's 2022 recruiting class, struggled during Wednesday night's Junior-Senior Indiana All-Star game at Brownsburg High School. Gunn, who led Lawrence North to the Class 4A title game this March, was just 2-for-13...

BLOOMINGTON, Ind. – When you're a five-star running back in high school, all the major football programs come calling. But for Stephen Carr, a California kid, none of that mattered. As soon as USC offered, his recruiting was over, just like that. A recruiting one-and-done, so to speak. "USC had...

DETROIT — Former Michigan State basketball player Keith Appling was charged with murder on Monday. With the help of his girlfriend, Appling, 29, is accused of killing Clyde Edmonds, 66, on May 22. He has been in custody since May 24. “It is alleged that Appling had an argument with...

EAST LANSING, Mich. — Michigan State basketball coach Tom Izzo announced several changes to his staff on Monday, which includes the addition of two former players. Doug Wojcik became the program's assistant coach and replaced Dane Fife, who left for an assistant coaching position at Indiana. Wojcik was an assistant coach under Izzo from 2003-05 before returning to East Lansing in 2018 and spending the last three years as the team's recruiting coordinator.

Nebraska and Arkansas are slated to face off for the third time this postseason on Monday, with the Fayetteville Regional championship on the line. The Cornhuskers earned a 5-3 comeback victory over the Razorbacks on Sunday while facing elimination. Now, both teams are pitted against each other with the loser being eliminated from the NCAA Tournament.

Facing elimination on Saturday against Norfolk State, Maryland could not be stopped when stepping up to the plate. The Terrapins recorded a school NCAA Tournament record seven home runs in a 16-0 victory. The Big Ten team scored in six different frames while recording 12 hits, including five runs in...

BLOOMINGTON, Ind. – Indiana gets the luxury of starting its first basketball season under Mike Woodson three months early, with a trip to the Bahamas that will include two games against Serbian club team BC Mega. The club, one of the strongest in Europe, has had 12 players drafted in...

BLOOMINGTON, Ind. — Indiana cornerback Tiawan Mullen burst onto the college football scene as a freshman in 2019. He was an All-Big Ten honorable mention and was named a first-team Freshman All-American by The Athletic. As a sophomore last season, he followed up by posting 38 tackles, 3.5 sacks, three...

BLOOMINGTON, Ind. — Indiana incoming freshman defensive back Maurice Freeman has arrived on campus. He posted a video to his Twitter account early Wednesday afternoon inside the Hoosiers' locker room. By the looks of his video, Freeman will wear No. 22 during his first season. Former Indiana safety Jamar Johnson...

After declaring for the 2021 NBA Draft and entering his name in the transfer portal on March 26, former Rutgers guard Jacob Young announced Wednesday he is heading to the Pac-12. Young spent two seasons at Rutgers after transferring from Texas, but he'll put on a jersey for Oregon in...

Report: Indiana Basketball Program Will Travel to Bahamas in August

Bloomington, Ind. — In the team's first season under new head coach Mike Woodson, the Indiana basketball program is taking an international trip to the Bahamas, according to Zach Osterman of the Indianapolis Star. The trip is scheduled for this August and will be the team's first venture outside the...