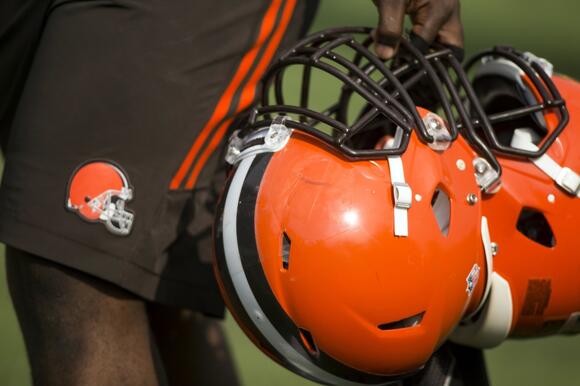 The Cleveland Browns have completed their 2021 NFL Draft, picking eight players and now turn their attention to the undrafted free agent market. Players that did not get drafted will have an opportunity to prove themselves and see if they can earn a roster spot.

This is a running list of the undrafted free agents that have reportedly agreed to sign deals with the Browns or at least a tryout to see if they can earn a contract to go to training camp with the team this summer.

Wilson has flashed dominance at times and has some impressive tape. The issue is he has never finished a season in his collegiate career, which always left his production falling short.. Some rave about his traits. He has pretty decent speed, but everything else was pretty mediocre in terms of athletic testing. Wilson is 22 years old.

This big move to sign him is almost identical to what the Browns did in signing corner A.J. Green last year after the draft had ended. He was effectively paid like a sixth round pick in order to get him to sign in Cleveland. Similar situation with Wilson.

Pretty decent agility if they want him to play in the slot. His explosion is pretty underwhelming and he is listed as having run a 4.74 40.

He tested slow in terms of his speed, but both his explosion and agility are promising. McKnight spent time at Iowa as well as Illinois State and Charlotte.

Nothing about his athletic profile stands out as a major strength, but nothing screams that it's a problem either. It's just a pretty average, but well rounded prospect.

A transfer from the University of Minnesota, Thomas has a really nice athletic profile. Size, speed, explosion, agility, he's strong across the board.

Love was an undrafted free agent after the 2020 season. He spent some time with the Los Angeles Rams before being released August 25th.

The Cleveland Browns are hoping to compete for a Super Bowl in the 2021 NFL season but also are planning to be competitive for years to come. While the 2021 offseason was full of additions to the team and very few subtractions, the upcoming seasons could see that flip. The Browns are at a place in their development where they will need to focus on keeping their own players and may not be able to do so with all of them.

What Is Nick Chubb Worth to the Cleveland Browns?

The Cleveland Browns spent the better part of a decade rebuilding in an extreme and thorough fashion. Now they're contenders, but they've also reached the point at which they're having to pay up to keep the band together. Star edge defender Myles Garrett has already been paid, and they'll almost...

According to Tom Pelissero of NFL Network, the NFL and NFLPA have come to an agreement on the ceiling for the salary cap in 2022 of $208.2 million, which is only around $10 million higher than the projected salary cap was to be for 2021. It's still a sizable gain,...

With the amount of hype around Jeremiah Owusu-Koramoah, a player that would've been hailed a success had the Cleveland Browns taken him in the first round, there's plenty of reason to be excited about how he can make an impact on the Browns defense while having reasonable expectations for his rookie year.

The Cleveland Browns had the first rookie minicamp under head coach Kevin Stefanski and had an episode of the team's broadcast Breaking the Browns this week, the subject of the conversation between Nicole (@Browns_Babe) and I. Both of us were excited at how organized and deliberate the pacing was from...

The Cleveland Browns left tackle Jedrick Wills has an opportunity to make a significant step forward in 2021 after playing his rookie season under difficult circumstances. Switching to left tackle in a pandemic shortened offseason where he didn't receive in person coaching until July, Wills was still able to have a relatively successful season.

As first reported by Lindsay Jones of The Athletic, on the day of Cleveland Browns offseason training activities, the team had to send multiple players home due to a positive COVID-19 test. One unidentified player tested positive and several others were labeled as close contacts. The major concern is that...

Cleveland Browns wide receiver KhaDarel Hodge has signed his restricted tender, which is worth $2.133 million as first reported by Brad Stainbrook of the Orange and Brown Report. Hodge was the last of the restricted free agents the Browns had tendered to sign his deal over a month after defensive end Porter Gustin and tight end Stephen Carlson.

Austin Hooper is joining teammate David Njoku and many others in a group called Tight End University. TEU is made up by Travis Kelce, George Kittle and Greg Olsen. The group will get together in Nashville, though there are not many details yet. It can be expected that the players will get plenty of field work and workouts in, then possibly some community stuff. To this point it is all unknown.

Ravens Offseason Primes Them for 2022

Given just how much the Baltimore Ravens invested in the 2020 season, pressing the limits of the salary cap, it wasn't a surprise they would lose players in free agency, but they did a remarkable job adding talent in the 2021 NFL Draft. They may take a step back in 2021, but they could end up being a better team for in 2022 and 2023 than they have been the previous two seasons.

What Could The Cleveland Browns Running Back Depth Chart Look Like?

Last season the Cleveland Browns went as the running backs ran often. Nick Chubb missed some time, still was a thousand-yard back though. Kareem Hunt had over a thousand total yards himself. The two will be back for Cleveland, leading the Browns backfield. Cleveland has some depth options and it...

The rehab for Cleveland Browns wide receiver Odell Beckham's recovery from the ACL injury has been called ahead of schedule for months, but met with an understandable amount of caution. Beckham released videos of jogging, then another where he's sprinting on a treadmill, but he wasn't doing things like cutting or any other unexpected movements, so it was premature to call him healthy.

Las Vegas Raiders defensive end Carl Nassib on Monday became the first active NFL player to come out as gay. Nassib, who is entering his sixth NFL season and second with the Raiders, announced the news on Instagram, saying he wasn’t doing it for the attention but because he felt representation and visibility were important.

The Cleveland Browns have added a significant amount of talent to the defensive side of the ball this offseason, but they are going to need more from Myles Garrett than they've gotten in any season thus far in his career. It's not about his production or getting more out of his talent coming off of an All-Pro season, but Garrett will need to do more when it comes to leadership and finding ways to elevate his teammates.

Kevin Johnson, who played for the Cleveland Browns in the 2020 season, is announcing his retirement after six seasons in the NFL. Johnson has signed with the Tennessee Titans in free agency ahead of the 2021 season. For the Browns, Johnson played primarily in the slot, but he had a challenging season with the Browns in 2020.

The Cleveland Browns announced Friday that Jeremiah Owusu-Koramoah, the team's second round pick in the 2021 NFL Draft, has signed his rookie deal. Owusu-Koramoah was selected 52nd overall after the Browns made a trade with the Carolina Panthers, moving up seven spots in exchange for a pick swap, giving up the 89th pick in the third round for the 113th pick in the fourth round.

The Cleveland Browns announced a number of hires and promotions within their scouting department on Friday, including Anthony Fabiano, a former reserve offensive lineman who was a backup center when the Browns were in the playoffs last year. Promotions. Nick Byford - Video Assistant. Kory Gillissie - Assistant Equipment Manager.

If Greedy Williams and Grant Delpit have an extra hop in their step at Cleveland Browns offseason training activities, it's difficult to blame them after what they have endured the past year. Each missed the 2020 season with significant injuries with uncertainty for both of their futures, so the joy they've shown early in OTA's has provided additional enthusiasm for a team that has plenty of reason to be excited for the 2021 season.