Pivoting In The Pandemic: Return Of Miami Rum Renaissance Festival, A Good Sign Of Recovery For Events In South Florida 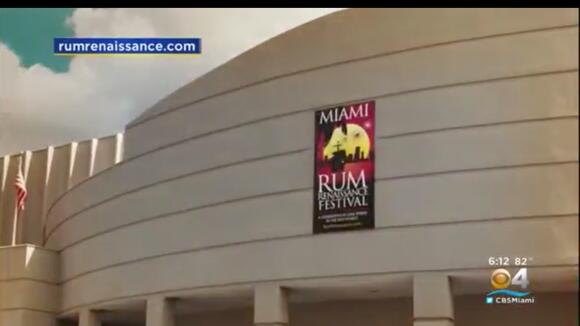 MIAMI (CBSMiami) – The Miami Rum Renaissance Festival, which has attracted thousands through the years, is set for a comeback.

Pre pandemic South Florida hosted major events and plenty of smaller conventions and now there is a sign of recovery with more events being held, but with restrictions.

“It has been in the past an international event three days. Everybody from around the world and in the business coming together,” said Burr.

Over its 12-year run, the festival has attracted those who take their rum seriously, including rum experts, producers, exporters, and importers.

Then came the pandemic, which put the hurt on conventions big and small.

The Rum Renaissance Festival is no exception. One of the many events that individually attract thousands to South Florida and impact the tourism economy.

It had to be postponed twice due to the pandemic.

“I think it is better to lay low, put it off. I am looking forward to November,” added Burr.

So, what was the pivot during the pandemic for the Burr family and the rum festival? Scale back, push back to late fall.

“Things should be back to normal and we will scale it back, so we are not trying to do something too big,” added Burr.

But it is a comeback, scaled back to a one-day event on November 14 in Coral Gables, and an example of the trail back to normalcy in South Florida’s events economy.

“Already rum companies are signing up, people buying tickets. We are kind of optimistic about it. You know cautious,” Burr says.

Smaller to medium size conventions are on the horizon for South Florida. Some will be hybrid, making use of Zoom, but tourism promoters say it is a start and the convention business is slowly ramping up.

Out Of Work? These Places Are Hiring

The coronavirus pandemic forced many businesses to close their doors and turn away customers and employees, but as many of those businesses and restaurants reopen, they are looking for employees to fill available positions as they keep up with increased demand for their goods and services.

A man swimming near a fishing line off Santa Rosa Beach was bitten by a shark on Thursday.

Miami Weather: Mostly Cloudy, Another Round Of Afternoon Storms

A Flood Watch remains in effect through Wednesday evening for parts of South Florida, including Broward and Miami-Dade counties.

Thursday is the transition day from a stormy and wet pattern to a drier and less stormy pattern.

Summer Solstice And Longest Day Of The Year Is This Weekend

The dog days of summer are upon us as the Summer Solstice happens this Sunday the same day as Father's Day. The summer solstice marks the official start of the summer season.

It's finally Friday and finally a drier day for South Florida.

Mackenzie Scott, the ex-wife of Amazon founder Jeff Bezos,  donated $40 million each to two state universities in Florida that have a history of promoting social mobility and educating students from communities traditionally underserved by higher education.

Miami-Dade County has long been known as Wade County and now the retired Heat superstar Dwyane Wade officially has a street named after him.

Surfing Is A Gray Reef Shark’s Version Of A Power Nap, According To FIU Marine Scientist

What does a Gray reef shark do when it’s tired of swimming? It goes surfing.

Over in Doral Tuesday, the Global Empowerment Mission and the BStrong organization announced new partnerships to support hurricane relief throughout the U.S. and the Caribbean.

While questioning the future of the project, Gov. Ron DeSantis and a divided state Cabinet on Tuesday backed Miami-Dade County as it seeks to extend a highway across wetlands tied to the Everglades.

SEE IT: Puppy Back With Owner After Dognapping At West Miami-Dade Animal Clinic Caught On Cam

A dognapping at a west Miami-Dade veterinary office was caught on camera, but fortunately the Pomeranian puppy is back with its owner.

Miami Beach has many new surveillance cameras to help in the effort to prevent the kind of chaos on South Beach seen during spring break.