Coral Springs, officially the City of Coral Springs, is a city in Broward County, Florida, United States, approximately 20 miles (32 km) northwest of Fort Lauderdale. As of the 2010 United States Census, the city had a population of 121,096. It is a principal city of the Miami metropolitan area, which was home to an estimated 6,012,331 people at the 2015 census. 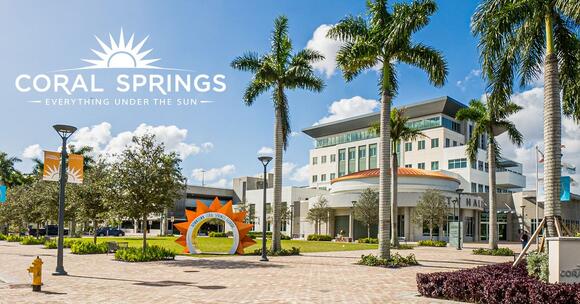 Of Krisman’s retirement, City Manager Frank Babinec said, “The success of Coral Springs land development plan and its aesthetics are a direct reflection of Susie’s commitment to our community. She is a true public servant, whose influence resulted in the formation of the Coral Springs Community Redevelopment Agency, as well as the development of our architectural guidelines, code ordinances and public art program. She has left an indelible mark on this community and deserves to enjoy what retirement has to offer. On behalf of the residents, businesses, and visitors, we thank Susie for her service.”

Krisman led the Bloomberg Philanthropies $1 million Public Art grant program and the city’s public art program. During her tenure, Krisman oversaw Code Compliance/Business Tax and various Federal, State and County Grants which the city is eligible for as an Entitlement City. Additionally, she was responsible for Neighborhood Partnerships, Slice of the Springs meetings, and reviewing of all development and redevelopment plans. Krisman was a part of teams over the years which earned a multitude of awards for their work, including two Florida Sterling Awards and the 2007 Malcolm Baldridge National Quality Award.

Coral Springs, officially the City of Coral Springs, is a city in Broward County, Florida, United States, approximately 20 miles (32 km) northwest of Fort Lauderdale. As of the 2010 United States Census, the city had a population of 121,096. It is a principal city of the Miami metropolitan area, which was home to an estimated 6,012,331 people at the 2015 census.

Biden is stepping up efforts to get shots in arms, including calling on governments to do more to incentivize vaccination by offering $100 to those who get vaccinated.

PERRYVILLE, Alaska (AP) — A powerful earthquake which struck just off Alaska’s southern coast caused prolonged shaking and prompted tsunami warnings that sent people scrambling for shelters. Residents reported only minor damage, but officials said that could change after sunrise and people get a better look. The National Tsunami Warning...

Bob Odenkirk in stable condition after experiencing a "heart-related incident"

Airlift begins for Afghans who worked for U.S. during long military campaign

WASHINGTON, July 30 (Reuters) - Some 200 Afghans were set to begin new lives in the United States on Friday as an airlift got under way for translators and others who risk Taliban retaliation because they worked for the U.S. government during its 20-year war in Afghanistan, U.S. officials said.

(CNN) — Texas Gov. Greg Abbott signed a bizarre, vaguely worded executive order on Wednesday that he says is aimed at lowering Covid-19 infections. In a statement about the order, he said: "The dramatic rise in unlawful border crossings has also led to a dramatic rise in COVID-19 cases among unlawful migrants who have made their way into our state, and we must do more to protect Texans from this virus and reduce the burden on our communities."

85% of flight attendants have dealt with an unruly passenger in 2021: Survey

A new survey found that 85% of flight attendants have dealt with an unruly passenger in 2021.

Scarlett Johansson sued the Walt Disney Co. on Thursday, claiming the entertainment giant deprived her of untold "Black Widow" box office profits by offering the Marvel blockbuster on its streaming service. Johansson said a significant part of her compensation is based on box office receipts, and she claimed that Disney...