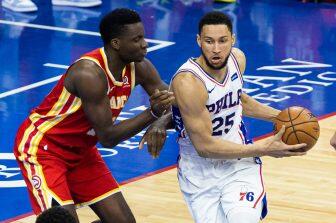 Joel Embiid and Tobias Harris added 17 points and seven rebounds each as the Sixers (41-21) clinched a playoff spot.

Shake Milton and Furkan Korkmaz contributed 12 apiece and Tyrese Maxey had 11 for the Sixers. All 15 Philadelphia players scored in the 44-point win.

The short-handed Hawks played without a number of key players such as Trae Young (left ankle), Cam Reddish (right Achilles) and De’Andre Hunter (right knee). Despite the injuries, the Hawks (34-29) are still 20-9 since Lloyd Pierce was fired and Nate McMillan was named interim head coach.

Clint Capela finished with eight rebounds, snapping his double-figure rebounding streak at 14 straight games. It had been the longest active mark in the league.

Simmons scored eight points and handed out six assists as the Sixers set the early tempo and cruised to a 67-39 lead at halftime. Embiid and Curry led the way offensively with 15 points each.

The depleted Hawks struggled to find their offensive rhythm throughout the first half and also missed 8 of 9 shots from beyond the arc.

When Curry drove to the basket and scored with 7:56 remaining in the third, the Sixers extended their commanding advantage to 78-48.

Philadelphia’s reserves continued to be aggressive as Matisse Thybulle scored on spectacular a one-handed tip with 8:15 left for a 100-70 advantage. Thybulle was fouled by Kris Dunn on the play and Dunn was also given a technical foul for unsportsmanlike conduct.

The Hawks became more frustrated and Young was also assessed a technical foul for arguing from the bench.

The Sixers’ lead reached 40 when Anthony Tolliver dropped in 2 of 3 free throws after being fouled on a trey with 3:16 to go.

Tom Vecchio joins Ariel and Ben to discuss his best bets for the Hawks vs. 76ers game slated for tonight.

Who are the Playoff X-Factors for the Hawks and 76ers?

Nick Kayal breaks down who the X-Factors for the 76ers & Hawks’ second round matchup are with Philadelphia Inquirer beat writer, Keith Pompey

The Atlanta Hawks will visit the Philadelphia 76ers on Sunday afternoon in Pennsylvania for Game 1 of their second-round series. For the game, the Hawks have announced their starting lineup, and the full lineup for the Hawks can be seen in a post below from FantasyLabs NBA. The Philadelphia 76ers...

Atlanta Hawks battle back to level series against Philadelphia 76ers

The Philadelphia 76ers let an 18-point lead slip as the Atlanta Hawks levelled their Eastern Conference semi-final series 2-2 with a 103-100 win. The Sixers started strong and held a 60-42 lead with 1:43 left in the first half, but Bogdan Bogdanovic and Trae Young kept chipping away at the State Farm Arena.

The 76ers tied up their series with a 118-102 win over the Atlanta Hawks on Tuesday evening. After the game, head coach Doc Rivers spoke to reporters. "You don't ever want to go down 2-0 in a series," Rivers said post-game. "And now we're not; it's 1-1, we have to go to Atlanta and get home-court back. We have a lot of big games ahead of us."

After dropping Game 1 in Philadelphia on Sunday, the 76ers will look to even the series against the Hawks in Game 2 of the Eastern Conference Semifinals at 7:30 PM ET on TNT on Tuesday, June 8th. Most books have the Sixers as 5 or 5.5 point favorites, but the series odds have begun to shift. Atlanta opened as underdogs at +165 to win this series, while Philly was the favorite at -215. Now, after falling to the Trae Young-led Hawks 128-124 on Sunday, the 76ers are only -118 favorites according to FanDuel and -132 according to Betonline.

A rhetorical question for casual bettors: Why does Vegas set lines in the first place? The answer is that they want to equalize action on both sides of a game. Books never want to be exposed. They want to collect their vig and move on. In a perfect world, favorites and underdogs would always be exactly .500 against the spread. But we don’t live in a perfect world for sportsbooks. Right now, we live in a perfect world for the common bettor. Through 57 NBA playoff games, favorites are 36-21 against the spread, according to NBA Bet.

The App is Back! Don’t forget to download the NBC Sports EDGE app to receive real-time player news, mobile alerts and track your favorite players. Plus, now you can check out articles and player cards. Get it here!. Bogdan Bogdanovic O/U 17.5 Points vs. 76ers. The 76ers found a way...

De'Andre Hunter will miss Game 2 for the Atlanta Hawks against the Philadelphia 76ers on Tuesday evening. The status of Hunter for Game 2 can be seen in a post below from FantasyLabs NBA. The Hawks won the first game of the series 128-124 and own a 1-0 series lead...

Liberty’s Noah Scribner goes up for a shot during Tuesday’s playoff loss to Washington Union. Coming into this weird and unpredictable season, the Liberty Hawks boys basketball team and head coach Johnny Gonzales had one goal in mind — to get back to the championship game. It wasn’t that long ago that Gonzalez and his men found themselves at the mountaintop.

2021 NBA playoffs: Joel Embiid and Philadelphia 76ers Reveal how far they Have come in Triumph over Atlanta Hawks

Regardless of the diet, Embiid claimed his dominance and efficacy in the Sixers' 127-111 triumph . Embiid's creation was critical to Philadelphia's assault on Friday night, but his flexibility as an offensive player paced the Sixers to their most remarkable performance this postseason. A main reason Embiid did not equal his output attempts at Game 3? He had been discovering teammates from the Hawks' double-teams. On three occasions, he struck on the Sixers' perimeter players to get blank 3-pointers.

The Atlanta Hawks capitalised on an incredible collapse from the Philadelphia 76ers to pull out a 109-106 victory and move to within one win of the Eastern Conference finals. Philadelphia were dominant in the first half, rallying behind Joel Embiid to race out to a 26-point early lead. The Sixers...

The Location Of The Atlanta Hawks Vs. Philadelphia 76ers Among The Greatest Comebacks In NBA Playoffs History | NBA.com Argentina | The Official Site Of The NBA

Atlanta Hawks lost 70-44 in the stadium of Philadelphia 76ers with just over nine minutes to play in the third quarter. The 76ers’ Wells Fargo Center, one of the league’s best-atmospheric stadiums, had previously been a boiler as a fifth game in the Playoffs in a series that is tied 2-2 and Joel Embiid, the star of the locals, warranted it. , enjoyed scoring a 24-point double-double in the first half.

The Atlanta Hawks were aggressive last offseason and it currently has them one win away from the Eastern Conference Finals. They put some pieces around Trae Young and John Collins that seem to be working out. Once this whole NBA season is complete, we could see Atlanta continue to be aggressive and pursuit of star players.

The Atlanta Hawks have been the right NBA pick for their second-round series with the Philadelphia 76ers. Friday’s Game 6 is no exception. Friday, June 18, 2021 – 07:30 PM EDT at State Farm Arena. I love it when a plan comes together. We’ve been pounding the Atlanta Hawks here...

Atlanta Hawks: Bogdanovic and Huerter should bounce back in Game 6

Atlanta Hawks fans were flying high following their surprising come-from-behind victory in which they overcame a 26-point deficit. The win gave them a 3-2 lead in the Eastern Conference Semifinals. It also puts them just one win away from their first Eastern Conference Finals berth since 2015. It’s a surprising turn of events in the 1-5 matchup.

Top-seeded Philadelphia 76ers on brink after stunning collapse against Hawks

Trae Young and the Atlanta Hawks pulled off a playoff comeback for the ages against the Philadelphia 76ers to move within a victory of the Eastern Conference finals. Young was fouled on a three-pointer and hit all three free throws with 1:26 left to cap a 26-point comeback and send Atlanta on its way to a 109-106 victory over the 76ers on Wednesday night in Game 5.

It’s a winner take all contest in the Eastern Conference semifinals in the City of Brotherly Love on the hardwood. The fifth-seeded Atlanta Hawks are on the road to face the top-seeded Philadelphia 76ers in Game 7 Sunday afternoon: the winner moves on to the Eastern Conference Finals while the loser goes home. Atlanta took Game 1 on the road, 128-124, back on June 6 before Philadelphia took Game 2 118-102 at home June 8 and followed that with a 127-111 road win in Game 3 June 11 to take a 2-1 series lead. The Hawks regrouped with a 103-100 home win in Game 4 Monday night and a 109-106 road win in Game 5 Wednesday to go up 3-2 in the series. With their backs to the wall, Philadelphia rallied to earn a 104-99 win on the road in Game 6 to force this contest. Which team comes up with the pivotal victory with the season hanging in the balance?