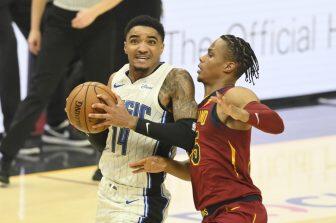 Cole Anthony’s driving layup and two free throws in the last minute Wednesday night allowed the Orlando Magic to survive a huge rally by the Cleveland Cavaliers and take a 109-104 win in Cleveland.

Anthony finished with 18 points as Orlando (19-43) snapped a six-game losing streak and won for just the second time in 14 games. Gary Harris paced the Magic with 19, while Chuma Okeke scored 18 before leaving the game in the fourth quarter with an ankle injury.

Reserves Dwayne Bacon and Chasson Randle added 16 and 10 points, respectively, for Orlando, which hit 50.6 percent of its field goal attempts.

Cleveland (21-41) erased a 21-point deficit at the fourth quarter’s beginning, tying the score at 104 when Kevin Love drained a 3-pointer with 1:03 left. But Anthony gave the Magic the lead for good with 45.1 seconds remaining, then made his foul shots with 21 seconds on the clock after a Cavaliers turnover.

Darius Garland pumped in a game-high 25 points and dished out 10 assists to pace Cleveland, while Cedi Osman scored 19 points. Jarrett Allen chipped in 17 points and a game-high 13 rebounds, and Isaac Okoro added 15 points.

Orlando took command about halfway through the first quarter with a 10-3 run that Okeke capped with a 16-footer from the right baseline that made it 17-10 at the 4:58 mark. James Ennis’ two foul shots with 23.2 seconds remaining gave the Magic a 26-16 lead going to the second.

Cleveland erased that deficit in the first 8 1/2 minutes of the second period, tying the game at 38 on Osman’s driving layup. But Orlando ripped off 10 of the next 12 points and settled for a 50-44 halftime advantage.

The Magic blew it open in the third period with two key runs. A 13-5 spurt opened the quarter and gave them a 63-49 cushion after Harris’ transition layup, and Randle canned a 3-pointer with 2.7 seconds left to make it 82-61 heading into the fourth.

Taurean Prince had some ups and downs last season after having been acquired via trade by the Cleveland Cavaliers from the Brooklyn Nets, but I thought he was solid for the most part. The issues for Prince were more so involving injuries though, objectively. Prince missed some games with an...

Cleveland Cavaliers: Five Key Questions ahead of the 2021 NBA Draft

The NBA offseason is here and with the draft approaching, FortyEightMinutes is examining the key questions for each team heading into the big night. Today,... The post Cleveland Cavaliers: Five Key Questions ahead of the 2021 NBA Draft appeared first on FortyEightMinutes.

Cleveland Cavaliers: Doug McDermott would be a logical FA target

The Cleveland Cavaliers need to be attempting more three-point shots next season, as fans know. They made the second-least triples per game, were 28th in three-point attempts per game and were last in three-point shooting percentage last season. It is a plus that Cleveland is stressing for Darius Garland and...

The Cleveland Cavaliers has tapped Esports Entertainment Group, Inc., as the team’s official esports tournament platform provider. The group will run three co-branded esports tournaments for the Cavs annually. “We are delighted to announce the Cavs as our first NBA team partnership. Our platform will help the Cavs strengthen connections...

Cleveland Cavaliers: Dylan Windler must prove himself in 2021-22

To this point, we have not seen much of Dylan Windler in action through his first two seasons with the Cleveland Cavaliers. Windler missed all of what was formally his first year because of complicaations involved with a stress reaction in his lower left leg, for one. Then in his...

CLEVELAND, Ohio — The Cleveland Cavaliers are starting the fourth year of a rebuild since LeBron James left a second time. The first time, the only thing that got the Cavs back on track was the return of The King after four years where 33 games was the most they won in a season.

It’s safe to say that last season had to have been disappointing for Cleveland Cavaliers big Larry Nance Jr. Nance was limited to a career-low 35 games active, and injuries in a number of occasions had to have been so frustrating for him. Most notably, Nance missed from February into...

2016 NBA Champion Cleveland Cavaliers: Where are they now

June 19, 2016 will be a day the people of Cleveland will never forget. That was the day the Cavaliers beat the Golden State Warriors 93-89 in Game 7 of the NBA Finals to bring a title to Cleveland. LeBron James, Kyrie Irving, Kevin Love and crew came back from...

Hello. Welcome to Chosen, a feature-length edition of Secret Base’s series Rewinder, in which we pick an iconic moment in sports history, then go back in time to explain all the preceding narrative and context that will help you appreciate the magic of witnessing that moment. In this case, we’re...

Cleveland Cavaliers: Isaiah Hartenstein wanting to re-sign is a relief

Earlier this week, it was reported that Spanish club Barcelona was set to be targeting current Cleveland Cavaliers big Isaiah Hartenstein as a potential free agency target. Hartenstein did not show interest in having intent himself of pursuing that possibility, but in the event he would end up declining his $1.8 million player option and could reportedly an “NBA out,” it was understandable that he could maybe entertain playing overseas.

Teams at the bottom of the standings are not always putting their best players on the floor. Minor injuries quickly become season ending as the year comes to an end. And the team has to fill out a roster somehow. The players on the fringes of the NBA are hunting...

Cavs fans should never forget that Koby Altman passed on Luka Doncic. Kent Bazemore. If the Cavs had just taken on Bazemore’s contract, the Cavs would’ve been able to draft Luka Doncic or Trae Young. This will forever be Koby Altman’s legacy. With Young leading the Hawks against the 76ers and wrecking their star perimeter player Ben Simmons, and Doncic going toe to toe with the LA Clippers in a series the Mavericks probably could’ve won had Doncic had any help whatsoever; it’s become a painful reminder of what the Cavs passed on for Collin Sexton.

When my daughter played collegiate basketball back a few years ago she had four fellow teammates from Australia that played on her team up at the University at Buffalo. That team and my daughter made an amazing run to the Sweet 16 of the 2018 Women’s NCAA tournament that year.

After finishing at 22-50, the Cleveland Cavaliers finished among the worst teams in the NBA. The Cavs finished with the fourth-worst record along with the Oklahoma City Thunder. In the past, the lottery treated Cleveland fairly well. However, over the past couple of lottery drafts, the Cavaliers have not been so lucky. No matter where they fall, there should be a player available that will fit Cleveland’s roster well. Of course, the Cavaliers hope to land the top pick or a top three pick, but will their odds allow it?

NBA legend Magic Johnson gave the basketball world another one of his famous “obvious” tweets on Friday afternoon. Almost a full day after the Milwaukee Bucks defeated the Brooklyn Nets 86-83 in Game 3, the former Lakers superstar/president revealed his not-so-scathing take on the matchup. “The Milwaukee Bucks were led...

Bookmark. Save. Do your thing. We will be providing constant updates on this page as it relates to the biggest

CHICAGO (AP) — Candace Parker made her hometown debut for Chicago and Courtney Vandersloot led the way offensively with 17 points and nine assists as the Sky beat the Indiana Fever 92-76 on Wednesday night to snap a seven-game losing streak. Parker returned home to Chicago in the offseason after...

On Wednesday afternoon, the Cavaliers’ G-League team, the Canton Charge, announced that they would be playing their games in downtown Cleveland from now on.

The Burke-Divide Babe Ruth baseball team split two games with the Williston 13s on Saturday in Crosby, winning 14-13 and losing 13-7, for the Bears’ lone victory in an eight-game stretch. Web Lowry led the Bears in the doubleheader with a combined two doubles, two singles, three runs scored and...

It's been a wild week in the NBA, and the drama continued Friday morning when the Celtics traded point guard Kemba Walker to the Oklahoma City Thunder in a deal that also sent former C's center Al Horford back to Boston. Here are the reported details of the huge trade,...