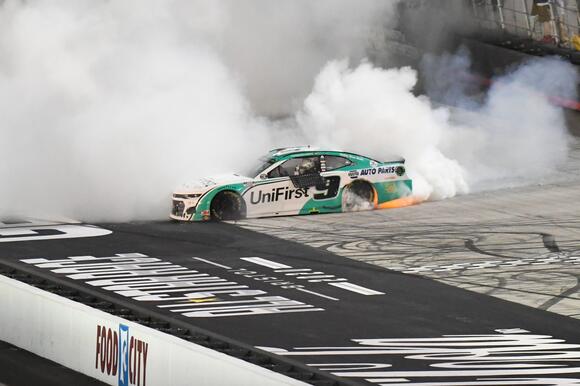 The NASCAR All-Star Race, a mid-season exhibition event, is getting a bit of a makeover this year, and after the governing body announced the new format Wednesday, many fans are extremely confused. And understandably so.

NASCAR shared the format for the 100-lap exhibition race on the 1.5-mile track, and there are several changes — though the race winner will continue to receive a $1 million check at the end, but still no points toward the driver standings.

The basics of those changes include the race being broken down into six stages, or rounds, with the field being inverted before the start of some of them. The first four rounds are 15 laps each, the fifth round is 30 laps and the final round is a 10-lap shootout for the checkered flag, and only green-flag laps will count toward the total.

Maybe this will produce incredible racing, and fans will love it. But on the surface right now, this format is pretty absurd and unnecessarily complicated.  It feels even too gimmicky for the All-Star Race.

More could be added to this list depending on the winners of the next six races leading up to the All-Star break.

However, fans still have an awful lot of jokes and questions about the general format of the actual All-Star Race, and, with so many moving pieces, the biggest one seems to be: Why?

NASCAR goes to Texas, and it's time for an All-Star race progress report

What else is there to say about Kyle Larson and Hendrick Motorsports?. The team is head and shoulders above the rest of the field right now, and Larson has become the championship favorite, winning for the third time Sunday at Sonoma as he fended off teammate Chase Elliott on an overtime restart.

NASCAR wants this weekend's All-Star Race at Texas Motor Speedway to be lively from green flag to checkered flag. It's trying to accomplish that through the rules for the race. The annual event regularly includes rule changes that are intended to heighten competition, but NASCAR took some of the adjustments...

The NASCAR All-Star Race makes its Lone Star state debut Sunday at Texas Motor Speedway with a new six-round, 100-lap format and a cool $1 million paycheck ready for the race winner. The starting lineup for the first ever NASCAR All Star event at the 1.5-mile Texas high banks was...

NASCAR All-Star race will be Texas-sized sendoff for Gossage

FORT WORTH, Texas — (AP) — An All-Star race in the Lone Star State, with at least five restarts over 100 laps, a few inversion gimmicks and $1 million for the winning driver. NASCAR is providing quite a night to mark the 25th season of racing at Texas Motor Speedway...

The NASCAR All-Star Race makes its Lone Star state debut Sunday at Texas Motor Speedway with a new six-round, 100-lap format and a cool $1 million paycheck ready for the race winner. The starting lineup for the first ever NASCAR All Star event at the 1.5-mile Texas high banks (8...

FORT WORTH — NASCAR’s All-Star Race recently has developed a reputation as a test bed for “innovative” ideas as part of its non-points format. For instance, last summer’s event at Bristol Motor Speedway saw the cars fitted with lights that provided an under-glow, an effort to appeal to a younger “tuner-car” crowd. Additionally, a new format for restarts that allowed drivers to pick whichever lane they preferred — outside or inside — is now part of the points-paying rules.

Kyle Larson became NASCAR's most recent million-dollar man by winning the All-Star Race at Texas Motor Speedway on Sunday night. He led the final eight laps of the race and held off Brad Keselowski and teammate Chase Elliott for the win. Larson has now won three consecutive Cup Series races....

NASCAR: Kyle Larson did something no driver had ever done before

Ryan Preece took the lead from Grant Enfinger with seven laps remaining in the Rackley Roofing 200 at Nashville Superspeedway to earn his first NASCAR Camping World Truck Series victory Friday night in his first race in the series. Preece, a 30-year old Connecticut native who competes full-time in the...

NASCAR reinstated spotter Eddie D'Hondt on Friday, about three weeks after he was suspended indefinitely following an arrest in North Carolina. D'Hondt is the spotter for the No. 9 Hendrick Motorsports team and defending NASCAR Cup Series champion Chase Elliott. "We are pleased about the resolution of this matter and...

NASCAR: 3 drivers who could become the next ‘renegades’

After NASCAR aired a program highlighting the renegades of the past, here are three possible drivers who could fill that role in the future. Renegades, the “bad boys” and the “tough guys” of NASCAR, have been a staple in the sport since the days of Cale Yarborough, Junior Johnson, Dale Earnhardt, Rusty Wallace and many more.

Roush Fenway Racing driver Ryan Newman brought his No. 6 Guaranteed Rate Ford Mustang down pit road for the final time on lap 87 of Sunday’s NASCAR Cup Race at Sonoma Raceway, in hopes that scuffed tires would be the key down the stretch with a handf

Kyle Larson held off two of the sport’s top road course racers – Chase Elliott and Martin Truex Jr. – to win the Toyota/Save Mart 350 in a thrilling overtime finish Sunday at Sonoma Raceway. Larson, who started on the pole, dominated the action in the NASCAR Cup Series race...

Nashville Superspeedway Post-Practice Media Availability | Saturday, June 19, 2021. KEVIN HARVICK, No. 4 Grave Digger Ford Mustang — HOW IS THE TRACK? “Honestly, it’s not anything like it was last time I was here because of all that crap they put on the racetrack. You’ve got to run up at the top where it’s all sticky, but I think our Monster Jam Grave Digger Ford Mustang was fairly good in race runs. We didn’t do any qualifying stuff, just tried to work on our race stuff and felt OK about it.”

Ryan Preece won the first NASCAR race at Nashville Superspeedway in 10 years by scoring a triumph in his first career Truck Series start. Preece got in a truck for the first time to get bonus track time ahead of Sunday’s Cup race, the first ever for NASCAR’s top series at the track. Nashville shut after the 2011 season when it’s anything but a coveted Cup date.

An unconventional format and a hard push from Brad Keselowski weren’t enough to stop Kyle Larson’s NASCAR Cup Series takeover. The NASCAR Cup Series’ All-Star break was no sanctuary for the continued domination of Kyle Larson and Hendrick Motorsports. HMS’ No. 5 Chevrolet continued its take over of the premier...

Is NASCAR Cup Series at Nashville Superspeedway destined to be a snoozer?

Can Kyle Larson Make 4 Wins In A Row In The Inaugural NASCAR Nashville Superspeedway Race?

With just 10 races remaining in the regular season, the NASCAR Cup Series is set to race at Nashville Superspeedway for the first time in series history. The 1⅓ mile concrete oval hosted NASCAR’s lower series from 2001 to 2011. Without any trends or history at the track, betting the...

NASCAR celebrations backfired in victory lane at Sonoma Raceway. Kyle Larson has returned to NASCAR in dominating fashion. Last week, the No. 5 team swept all four stages of the Coca-Cola 600 at Charlotte Motor Speedway, NASCAR’s longest race. He started from the pole position on Sunday at Sonoma Raceway....