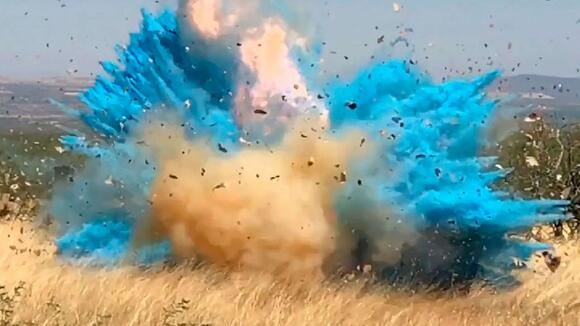 Last week, residents of several New Hampshire towns were startled by a blast that rattled homes and could be heard for miles.

The source: 80 pounds of Tannerite, an over-the-counter, highly explosive substance used for firearms practice that in this case was involved in a gender-reveal stunt at a quarry in Kingston.

The man who bought and detonated the Tannerite in Tuesday's blast turned himself in, and police said they're determining whether he'll face charges. In addition to the Tannerite, a popular method of gender reveals, police also found blue powder at the site of the blast, according to the New Hampshire Union Leader .

Tannerite sells a gender-reveal "target" that contains just 1 pound of the explosive, along with pink or blue chalk powder.

Police did not report any injuries in connection with the explosion, though have noted the dangers of potentially misusing Tannerite, such as sparking wildfires or damaging property.

The New Hampshire explosion is the latest gender-reveal event to make headlines. Others have had serious, even fatal, outcomes, turning celebrations into tragedies.

MORE: 2 dead after plane crashes during gender-reveal stunt in Mexico

In Mexico last month, two people died after a plane involved in a gender-reveal stunt crashed into water. In February, a 28-year-old New York man was killed when a device he was building for his baby's gender-reveal party exploded, authorities said.

In 2019, a soon-to-be grandmother died in Iowa when a gender-reveal device exploded and sent shrapnel flying. That same year, an airplane crashed in Texas after the pilot dumped about 350 gallons of pink water, authorities said. Both passengers survived, one suffering only minor injuries. 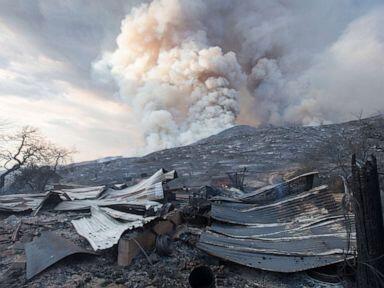 Ringo H.W. Chiu/AP, FILE - PHOTO: A burned structure is seen at a wildfire in Yucaipa, Calif., Sept. 5, 2020, after a pyrotechnical device used to reveal a baby's gender at a party accidentally sparked a wildfire that burned thousands of acres.

In 2017, an explosion set off at a gender-reveal party in Arizona sparked a fire that burned 47,000 acres in the Coronado National Forest and cost over $8 million in damages and in fighting the fire. The father-to-be, an off-duty U.S. Border Patrol agent who shot at a target packed with Tannerite, pleaded guilty in 2018 to federal charges stemming from the fire and was ordered to pay restitution, starting with a $100,000 initial payment and $500 monthly payments after that.

Gender reveals, from dyed cakes and confetti-filled balloons to the more over-the-top, sometimes destructive stunts, are likely being fueled by several forces -- a prime one being social media.

"They're these really increasingly Instagrammable-worthy things to be able to put on social media," Rebecca Ortiz, an assistant professor in the S.I. Newhouse School of Public Communications at Syracuse University, told ABC News. "Gender-reveal parties are focused on a lot on color and ornate presentation, things that are almost perfectly translated into the social media space."

A gender-reveal post can be a form of "currency" to help build rapport and cache on social media, Kelli Matthews, a public relations instructor at the University of Oregon's School of Journalism and Communication, told ABC News.

"I think that's really a phenomenon that's unique to mid-to-younger millennials and Gen Z," Matthews said. "That's their currency. The sharing of information and the sharing of experiences is the currency of relationships."

Doing something "different" or "bigger" can help add to that currency and "cut through some of that noise so that we can really find our people and find our community and reinforce those bonds," she said. 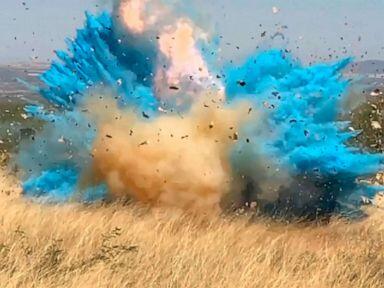 U.S. Forest Service via AP, FILE - PHOTO: In this frame grab from a April 23, 2017, video provided by the U.S. Forest Service, is a gender reveal event in the Santa Rita Mountain's foothills, southeast of Tucson, Ariz.

Beyond chasing likes on social media, birthrate trends may also be partly responsible for the continued popularity -- and over-the-top nature -- of these parties, Ortiz posited.

"While there's plenty of people having children, people are having less children and waiting later to have children, so it's a really special event and I think people are looking for ways to celebrate that, beyond just the traditional baby shower," she said.

MORE: Despite death, wildfire and a plane crash, gender reveals are probably here to stay

Gender-reveal parties have been criticized for reaffirming gender stereotypes. The mother who's credited with starting the trend in 2008 has since pushed back against the evolution of the parties and their reinforcement of gender binaries.

Whether consciously or not, Ortiz wondered if gender-reveal parties themselves are a pushback against changing conversations around gender identity.

"Having these gender-reveal parties re-emphasizes some of those traditional ways that we think about gender and gender norms," said Ortiz, who conducts research on sex and gender in the media. "It's not to say that people who have gender-reveal parties are automatically conservative in their thinking around this. But I think there could be something about that, to push back against this push against the status quo."

"There will always be people that take it to the extreme," Ortiz said, as some strive to create a moment that will "stand out among all the other content" on social media.

As the social media landscape becomes more fractured, such as through apps like TikTok, people will go "bigger and bigger," Matthews predicted, despite the potential consequences.

"I don't think anyone's learning a lesson from this," she said.

"You guys can instead sing kumbaya with them and hope they'll just stop, but what you're proposing doesn't work," Cruz said to a heated audience.
TEXAS STATE・3 DAYS AGO
USA TODAY

Katharine McClain said her husband John McClain found the baby in a shed at their home and wrapped her in a towel before an ambulance arrived.
LIVINGSTON, TX・1 DAY AGO
WashingtonExaminer

Hurricane Ian is projected to continue rapidly strengthening after moving over Cuba, and AccuWeather forecasters have rated the storm a 3 on its RealImpact Scale for hurricanes when it slams into Florida due to threats including excessive rainfall, storm surge, winds and even severe weather. But, Ian’s impacts will be far from over in the United States.
FLORIDA STATE・2 DAYS AGO

Hurricane Ian on path toward Florida after making landfall in Cuba

CNN reported that Anton Lunyk was the offending protester whose cell got rung up by 1600 Pennsylvania Avenue. The news organization also reported that the committee is continuing to investigate both who made the call and why.
POTUS・1 HOUR AGO
The Independent

Satellites have captured the enormous Hurricane Ian from space as the Category 3 storm barrels towards the Florida coast. The images, released by the US National Oceanic and Atmospheric Administration (NOAA), showed tightly-packed storm bands rotating north after the eye of the hurricane passed over western Cuba on Tuesday.Hurricane Ian crashed into Cuba at 4.30am (eastern time) in Pinar del Rio province, where 50,000 people had been evacuated and authorities had made attempts to save the island’s valuable tobacco crop. Winds reached sustained speeds of 125mph (205 km/h) with storm surge of up to 14 feet (4.3 meters).At 2pm...
FLORIDA STATE・2 HOURS AGO
The Independent

Can Donald Trump keep his QAnon supporters under control before the midterms?

At former president Donald Trump’s rally in Wilmington, North Carolina, last week, plenty of supporters wore memorabilia or shirts featuring the former president’s visage saying “I’ll be back,” implying he would run again in 2024.Some carried the slogan “Let’s go Brandon” – shorthand for “F*** Joe Biden” among the MAGA faithful – while others said “Joe and the Hoe Gotta Go,” a crude reference to Vice President Kamala Harris.But among the hordes of supporters were devotees of the QAnon conspiracy – the right-wing movement that postulates that the former president was trying to thwart a satanic paedophile ring that has since...
ELECTIONS・1 HOUR AGO