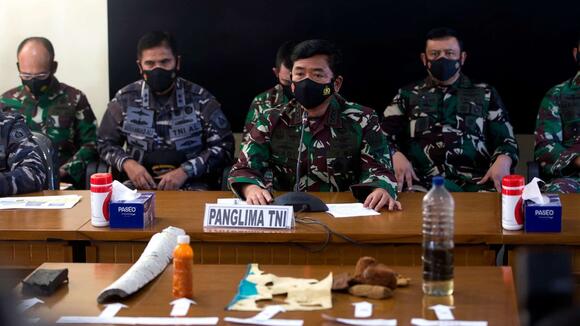 The missing Indonesia submarine with 53 sailors on board has been officially declared "sunk" by the country’s military chief hours after the remaining oxygen supply was believed to have run and after discovering debris from inside the submarine on the surface of the Bali Sea.

"We all feel so bereaved about this incident,” Marshal Hadi Tjahjanto told the press Saturday.

"The elements of the Navy have found oil spill and debris, which are authentic evidence of the sinking phase of the KRI Nanggala [402 submarine]," he said at a press conference in Bali Saturday.

The multi-nation search effort for the submarine will continue. 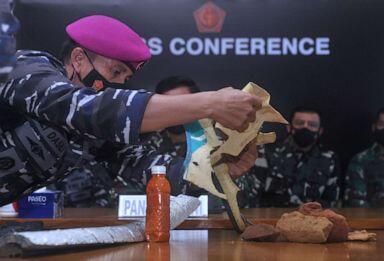 The chief of staff of the Indonesian Navy, Admiral Yudo Margono, said the debris recovered from the search and rescue effort belonged to the missing submarine.

MORE: Indonesia's navy searching for 53 people on board a missing submarine

"Items have been found in the vicinity of the submarine's last seen location during the dive, which are believed to be parts or components that are embedded in the submarine and this will not be lifted [to the surface] if there is no external pressure or cracks in the torpedo launcher," Yudo said.

"And these items are not owned by the public, and around a 10-mile radius, there are no other ships that pass,” Yudo continued. “It is believed that these properties belong to KRI Nanggala.”

Despite declaring the submarine sunk, officials have avoided declaring the fate of the crew, saying that they “still may be safe." Yudo even floated the remote possibility that if the submarine did not experience a complete blackout, oxygen can last an additional two days.

However, Yudo believes the submarine is now at a depth of 850 meters (nearly 2,790 feet), which is beyond the KRI Nanggala’s maximum operating depth of 250-500 meters. 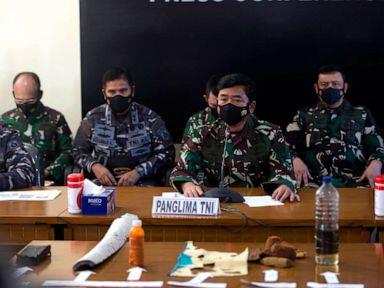 Firdia Lisnawati/AP - PHOTO: Indonesian Military chief Hadi Tjahjanto, center, talks to media as they display debris found in the waters during a search for The Indonesian Navy submarine KRI Nanggala at Ngurah Rai Military Air Base in Bali, Indonesia on Saturday, April 24.

Yudo ruled out the possibility that the submarine exploded underwater as the condition of the debris recovered suggested the vessel cracked.

"Cracks, so it is not an explosion. If there is an explosion, it must have destroyed everything,” Yudo said, adding that if there was an explosion, the acoustics would have been picked up on sonar.

The 44-year-old German-made submarine was part of the Indonesian Navy’s 2nd Fleet. It was taking part in a torpedo training exercise early Wednesday morning in the waters north of Bali when it suddenly lost contact with the other vessels involved. Officials previously estimated that the vessel only had a 72-hour supply of oxygen onboard. The local press reported that the vessel might have been overloaded past the usual operating capacity of a submarine in its class, which is 40 sailors.

A multinational rescue effort including the US, Australia, Singapore and Malaysia have joined Indonesia in the search and rescue effort with the Pentagon deploying a U.S. Navy P-8 Poseidon aerial reconnaissance plane from the Philippines.

My heart really goes out to those Sailors. I pray they can be recovered from the bottom of the Sea and my heartfelt condolences goes out to all the families and loved ones of those brave men. Travel well. May God rest your Souls and give you Peace. 🙏🙏🙏🙏🙏🙏🙏