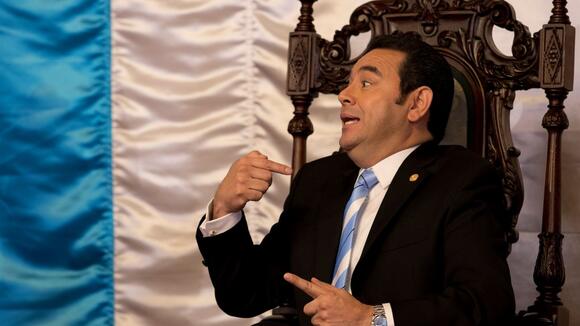 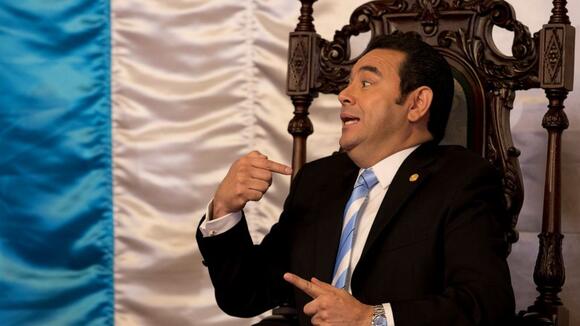 Guatemalan prosecutors on Wednesday requested that former President Jimmy Morales be stripped of his immunity so he can be prosecuted for violating the mandate of the United Nations-backed anti-corruption mission then working in the country.

Morales, who led Guatemala from 2016 to 2020, has immunity because after his term he immediately became a representative to the Central American Parliament. Morales assumed the presidency pledging to battle corruption but once he and family members became targets of the anti-corruption mission, he moved to push it out of Guatemala.

In 2017, Morales declared the head of that mission, Colombian Iván Velásquez, persona non grate and did not allow him to re-enter the country.

Morales was twice investigated during his presidency for alleged electoral crimes.

But it was his decision to force Velásquez out, despite a ruling from Guatemala’s highest court that he couldn’t, that was cause for Wednesday’s move by the Anti-Corruption Prosecutor’s office to try to strip his immunity.

The U.N. mission, known as the CICIG, worked in Guatemala for 12 years, taking down criminal networks and even former President Otto Pérez Molina and his Vice President Roxana Baldetti.

Neither Morales nor his lawyers immediately commented.

Attorney’s Office El Salvador has issued an arrest warrant against former President Salvador Sanchez Serன்n (2014-2019), accusing him of embezzling $ 351 million when he was vice president of the government of his predecessor Mauricio Funes., Said Attorney General Rodolfo Delgado this Thursday. “Then we will request a red broadcast...

SAN SALVADOR (Reuters) -El Salvador has ordered the arrest of former president Salvador Sanchez Ceren and nine top officials from a past administration as part of a money laundering and corruption probe, the Attorney General’s office said on Thursday. The office said Sanchez Ceren was out of the country, but...

Former Panamanian President Ricardo Martinelli has gone on trial for a second time on charges that he tapped the phones of opponents and journalists,

MEXICO CITY (AP) — Mexico’s president issued a rare public call Friday for the country’s most violent state to replace its attorney general. The north-central state of Guanajuato saw more than 1,562 homicides in the first five months of 2021, more than any of Mexico’s other 31 states, despite only being the sixth largest in terms of population.

Frank Ramassini, journalist and critical activist for the assassination of President Guatemalan in Guatemala

Sixteen hours ago, a young activist and independent journalist called on Guatemalan President Alejandro Giamati to resign. Guatemalan activist Frank Stalin Ramassini, a critic of the government of President Alejandro Giamati, was shot dead in an armed attack in which three more people died at a nightclub in the capital, the ombudsman Jordan Rhodes condemned this Saturday.

MEXICO CITY (Reuters) - The Mexican attorney general’s office said on Friday it had launched a criminal investigation into suspected illicit enrichment by former Economy Minister Ildefonso Guajardo, a senior official in the previous administration. In a statement, the office said prosecutors believed Guajardo had during the period 2014-2018 probably...

Cuba's president says government has some blame for protests

Cuban President Miguel Díaz-Canel has acknowledged shortcomings in his government’s handling of shortages and of neglecting certain sectors, but he is urging Cubans to not act with hate — a reference to violence during recent street protests

Prosecutors in Madagascar claim to have foiled an assassination attempt against the president.

Jacob Zuma's long-running corruption trial will resume on Aug. 10, a South African judge ruled on Tuesday after the ex-president sought to have the case postponed because of the pandemic and recent unrest. "The trial is adjourned to 10 to 13 August," Judge Piet Koen said. Zuma on Monday appeared...

An appeals court in Mexico has overturned the acquittal of 1990s drug lord Hector “El Güero” Palma, staving off an international embarrassment had he walked free

Haiti’s police chief has accused a Venezuelan businessman who owns a security company in Florida of traveling to Haiti numerous times as part of a plot to assassinate President Jovenel Moïse, who was killed last week

The president of Guatemala, Alejandro Giammattei announced on Monday that he will issue a decree to limit the protests against him, which he considers “illegal”, to prevent “the virus from becoming more upset”, in the face of the Covid-19 crisis in That country. The president reported that this Tuesday a...

Afghan interpreter for US Army was beheaded by Taliban. Others fear they will be hunted down too

Kabul, Afghanistan (CNN) — Sohail Pardis was driving from his home in Afghanistan's capital Kabul to nearby Khost province to pick up his sister for the upcoming Eid holiday celebrations to mark the end of Ramadan. It was supposed to be a happy occasion enjoyed with family. But during the...

Fact checking Rep. Jordan's claim that Speaker Pelosi was responsible for US Capitol security on January 6

(CNN) — Republican Rep. Jim Jordan of Ohio suggested Wednesday that House Speaker Nancy Pelosi had been responsible for the security presence at the US Capitol on January 6, after Pelosi rejected his appointment to serve on the select committee investigating the insurrection. "Why wasn't there a proper security presence...

Representative Madison Cawthorn claims President Joe Biden is "mentally unstable" and said first lady Jill Biden should be called out for being "cruel" to her husband. Cawthorn, a Republican who represents North Carolina's 11th congressional district, spoke to Newsmax's Chris Salcedo about his views on the president's mental state and Jill Biden's treatment of her husband.

New York Gov. Andrew Cuomo could be in trouble after the head of his impeachment investigation said an outspoken aide for the governor went too far in a tweet about State Attorney General Letitia James, who is carrying out a separate probe into allegations of sexual harassment. In a letter...

Trump Supporter Who Protested Against Vaccinations Dies of COVID-19

Linda Zuern, a supporter of former President Donald Trump and a protester against COVID-19 vaccines, has died of coronavirus. She lived in Bourne, Massachusetts. She was 70. Zuern reportedly contracted the virus after visiting her mother in South Dakota, following the death of her father. During their return trip to Bourne, both women contracted the illness, the Cape Cod Times reported.

This Republican wants an independent commission to study January 6. Who wants to tell him?

(CNN) — Rep. James Comer has a brilliant idea of how to get to the bottom of what happened before, during and after the US Capitol riot on January 6 -- and how to prevent it from happening again. "The best thing to do, in my opinion, is to have...